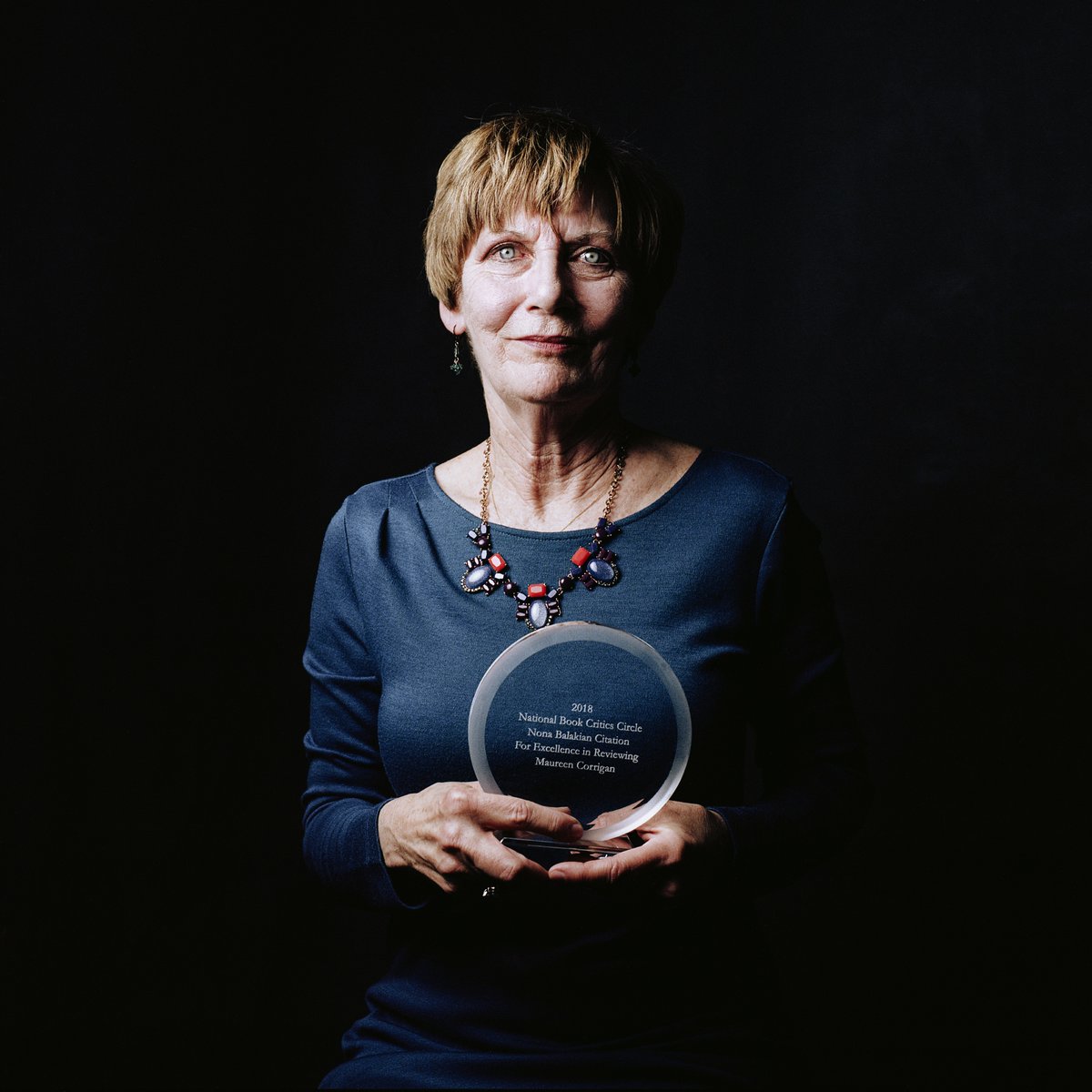 On March 14 at the National Book Critics Circle awards ceremony at The New School in New York, Maureen Corrigan was honored with the Nona Balakian Award for Excellence in Criticism. Below is her acceptance speech. And here's a review from her winning entry.

Thank you. I’m so honored to receive the Balakian Award, especially because it’s an award that comes from my peers in the National Book Critics Circle. I’d also like to thank emerging critic, Justin Rosier, for his wonderful interview with me in the Critical Mass blog.

I’m told my remarks should clock in five minutes or less and I can do that, no problem, because I’ve been writing book reviews for Fresh Air for the past thirty years that must clock in at around five minutes. So here goes.

It’s very powerful for me to be accepting this award here at the New School, because I started my career as a book critic a few blocks away at the Village Voice. It was the mid 1980s and I was a Ph.D. student in English at the University of Pennsylvania, working on my dissertation on the culture criticism of the Victorian Sages, Thomas Carlyle and John Ruskin. Like them, I was miserable. It was the high era of critical theory at Penn and I felt very alienated from the process of putting literature through the de-flavorizing machine of Deconstruction. I also felt alienated from the culture of the graduate English program at Penn, where Friday afternoon sherry hours were required attendance. A friend of mine who was equally alienated by the History Ph.D. program at Penn decided to apply for a job as an assistant editor at the Village Voice Literary Supplement and asked me to help her with the take home editing test the Voice gave her.

Think about that. Who gives a take home editing test? My friend got the job and as a reward for my “help,” she asked if I wanted to try to write a book review. It was as though someone opened the door to a wider world–a world of intellectual energy and light. When I started writing those Voice reviews, I was allowed to respond fully to the literature I read—with my head and my heart. Many years later I read an encomium to the critic Irving Howe that praised Howe by saying that he taught us that “enthusiasm is not the enemy of the intellect.” I immediately committed that phrase to memory and I repeat it as often as I can, especially to my students. Writing for the Voice gave me permission to write about literature in my reviews with my whole self–with my intellect, enthusiasm, passion, and humor. To this day when I’m having trouble with a review, I tell myself to imagine I’m writing for the Village Voice and that still works to free me up.

It was after I wrote a different kind of piece for the Voice—a long exposé about what it was like to work as a grader for two summers for the AP English exam then run by the Educational Testing Service—that I was contacted by Fresh Air and asked if I’d like to do a version of that piece for radio. Back then, I was still at Penn and living in Philadelphia and listening to Fresh Air religiously. I thought Terry Gross was the best interviewer and John Leonard, a founding member of the NBCC and then Fresh Air’s book reviewer, was just the most brilliant contemporary culture critic.

Of course I said “Yes!” That exposé was probably about 5000 words (because, after all, this was the Village Voice, known as the “writer’s newspaper”) and I was told that Fresh Air reviews averaged about 750 words. Cutting down that piece was the greatest writing exercise of my life and the producer who took me through draft after draft and taught me how to write for radio is here tonight. I’d like thank Naomi Person for her patience and her guidance and I’d also like to thank her successor, my current producer at Fresh Air, Phyllis Myers, for accompanying me every week on the wild ride of selecting which books to review and editing those reviews against our tight deadlines. I’d also like to give a loving shout-out to Danny Miller, the executive producer of Fresh Air and, of course, to Terry Gross. You’ve all given me a career as a book critic I could never have imagined.

Doing book reviews on radio requires a different style of critical writing: radio, after all, is about story-telling. My challenge every week is to think about how to get listeners to turn their attention for five minutes or so to my review on Fresh Air. To do that I need to tell a story—which is not the same as summarizing the plot. In fact, I think the most boring thing a critic can do is to summarize the plot of the book for paragraphs and paragraphs in a review. Radio is also an intimate form: I’m speaking to people in their kitchens, their cars, their bathtubs. . . . Listeners get a sense of my estimation of a book not only from my words, but also from how I sound. As one might expect in such a personal form, I sometimes receive some very personal responses from my listeners. Not everyone is a fan.  A few years ago, I received an email with a subject heading that read simply, “Your Voice.” It’s probably wise never to open up an email with such a subject line, but I did. The listener (whom I’m sure was a man), proceeded to tell me that his idea of hell would be to be locked into a room with only my voice piped in hour after hour.

When I did my first piece for Fresh Air, my father, who was a voracious reader in the evenings after working at his job as a steamfitter, told me that it was great that I got to be on radio but that, “there was no future in it. Radio was a dying medium.” I’m happy to say he was wrong. For the past thirty years it’s been my privilege and my pleasure to bring good and sometimes even great books to the attention of the NPR audience. I’m so grateful for this life in books and I’m grateful for this honor. Thank you, and, please, keep on listening.

Maureen Corrigan, book critic for NPR's Fresh Air, is The Nicky and Jamie Grant Distinguished Professor of the Practice in Literary Criticism at Georgetown University. She is an associate editor of and contributor to Mystery and Suspense Writers (Scribner) and the winner of the 1999 Edgar Award for Criticism, presented by the Mystery Writers of America. Her book So We Read On: How The Great Gatsby Came To Be and Why It Endures was published by Little, Brown in September 2014. Corrigan's literary memoir, Leave Me Alone, I'm Reading! was published in 2005. Corrigan is also a reviewer and columnist for The Washington Post's Book World, and has served on the advisory panel of The American Heritage Dictionary.