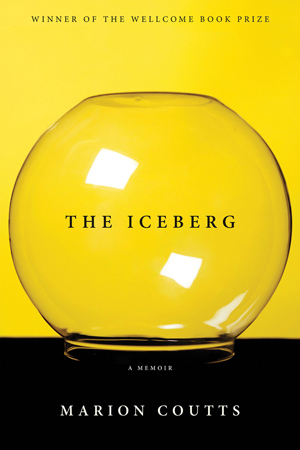 In November, National Book Critics Circle members will begin nominating and voting for the fourth John Leonard award for first book in any genre. In the run-up to the first round of voting, we'll be posting a series of #NBCCLeonard blog essays on promising first books. The fourteenth in our series is NBCC president Tom Beer on Marion Coutts’ The Iceberg. (Black Cat).

How can a book about death be so full of life? It’s one of the many paradoxes of Marion Coutts’ stunning memoir, “The Iceberg” (Black Cat), about the three years that her husband was dying of — or should one say living with?—cancer. Coutts is a London-based artist who works in video, film, sculpture and photography; Tom Lubbock, who died in 2011 at the age of 53, was an art critic for the English newspaper The Independent. They are professionally successful and happily married with an 18-month-old son (called Ev here) when, as Coutts reports on the opening page, “Something has happened. A piece of news. We have had a diagnosis that has the status of an event.”

The diagnosis is a brain tumor—which, upon biopsy, proves malignant.  Straightaway, Coutts begins her thoroughgoing exploration—in language that is passionate, poetic, even philosophical—of what the “news” means for their lives together. “It is as if a new physical law has been described for us bespoke,” she writes, “absolute as all the others are, yet terrifyingly casual. It is a law of perception. It says, You will lose everything that catches your eye.” And now the paradoxes begin: “Yet afterwards—more strangeness—we carry on in many ways as before, but crosswise to what might be expected, we are not plunged into night. It is still day, but the light is unnatural. The glare on daily life is blinding.”

Several different strands run through this more or less chronological narrative from diagnosis to death. One is the development of Ev, who is undergoing his own physical and emotional journey, that of growing up. Alongside it is Marion and Tom’s effort to parent him well—an ordinary effort made extraordinary by Tom’s illness. “The accelerating forces of Ev’s life are a perfect counterweight to the forces accelerating in ours,” she writes. And: “Both of them are on the front lines of personhood, more so now than ever.”

Then there is the unfolding medical drama: two craniotomies, chemotherapy, steroids, experimental drugs. The search, finally, for the right hospice.  A series of emails to friends, apprising them of Tom’s condition and inviting visits, is threaded through the narrative. The reader is pulled into this circle. There is also the gradual impingement of the tumor on Tom’s linguistic abilities, and thus his work. Nevertheless, he continues to write, with the help of Marion and friends. “Our job is to organize his thoughts and writings under dictation,” Coutts explains. “We rewrite under instruction, calibrate what’s important, flesh out structures and crucially note where all the stuff is on the computer.”

Language is a central theme in “The Iceberg.” As Tom loses his facility with it, its essential fragility is laid bare. In the hospital Tom and Marion play a game of Twenty Questions when he wants something but cannot access the word for it: “Is it clothes?” she asks. “Food?…Bigger than a computer?…Do we use it in the kitchen?” (It turns out to be his dressing gown. “It’s just a simple thing,” Tom says.) But language is revealed to be more than just vocabulary; it is the understanding—also fragile—between individuals. “How can a language endure if it has only one to speak it and another to give it context?” Coutts asks. “We are a people of two and ours is a dying tongue.”

See how good the writing is?  Illness and death can be a minefield of clichés for the novice writer, but Coutts navigates the terrain fearlessly. You may not think you want to read about another family dealing with cancer, but “The Iceberg” holds you in present-tense thrall on every page.

Tom Beer is the books and travel editor at Newsday, and president of the National Book Critics Circle. He was previously an editor at Out magazine. He has written for publications including Time Out New York, The Village Voice, and The Los Angeles Times, and he contributed to “The Salon.com Readers' Guide to Contemporary Authors” (Penguin). Find him on Twitter @TomBeerBooks.