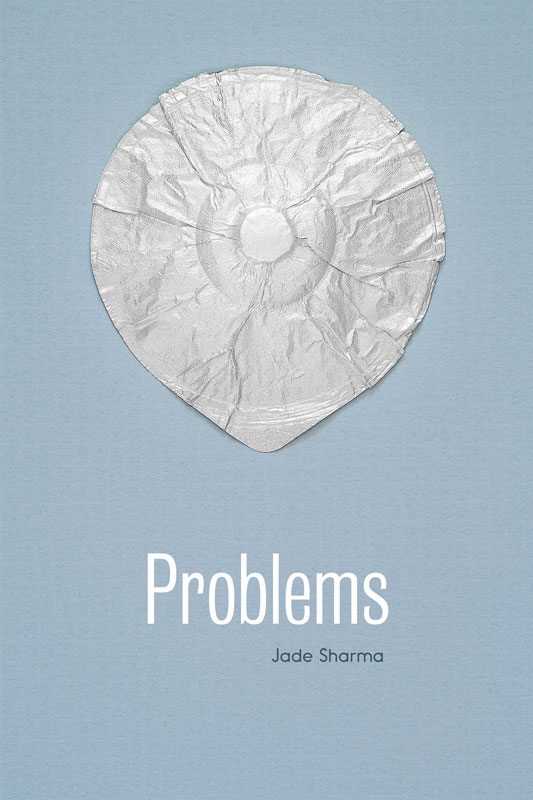 In November, National Book Critics Circle members will begin nominating and voting for the fourth John Leonard award for first book in any genre. In the run-up to the first round of voting, we'll be posting a series of #NBCCLeonard blog essays on promising first books. The thirteenth in our series is NBCC member Brendan Driscoll on Jade Sharma's Problems (Coffee House).

The first thing that hits you in Problems, Jade Sharma's depiction of a young woman's swerve into heroin addiction, is the distinctive voice of its narrator.  Maya is disarmingly candid and delightfully vulgar, offering us her deepest anxieties and most carefully-guarded secrets alongside wry commentary on bodily functions, sexual proclivities, and all of the irony and stupidity that constantly surrounds her.  When we meet Maya she is up late masturbating and snorting drugs while her “beautiful idiot” husband Peter sleeps in the next room.  She fantasizes about Ogden, the older professor with whom she is having an affair.  She tells us about her father's death and her mother's multiple sclerosis, about how she sometimes lies about being Indian-American, and about how her college boyfriend, who may have been her soul mate, preferred Leonard Cohen records to sex and used to eat his boogers.  Heroin suits her.  It comports with, and facilitates, the disinterested detachment with which she engages with the world.  The drug's warmth spreads through her body, “like pee on a blanket.”

Her problems, it turns out, are just beginning.  After a disastrous Thanksgiving at his parents' house, Peter leaves her, and Ogden rejects her as well.  An eating disorder flares up.  She loses her job at the bookstore, and the next job after that.  Her heroin use escalates.  “Just be a junkie now,” she tells herself, seeking solace in the moment in an addict’s life when all other problems become secondary to the one big problem.  She starts having sex for money with people she meets online, aggressive bankers and rich hipsters and talkative loners, and she surprises herself at how easy it becomes.  She makes crass, and funny, observations about the weirdness of male desire. “I bet there’s some guy who jerks off by rubbing his cock on books,” she says, “he cringes in pain but he kind of loves it more than anything in the world.”  Eventually, Maya overdoses, in what might have been a suicide attempt.  She ends up in rehab, where she chafes against mandatory bra-wearing and other stupid rules.  When they tell her to write poetry she plagiarizes a Counting Crows song.  But before long she’s back home, back online, and using again.

Maya’s complex blend of vulnerability and ennui is enthralling, and her abiding fascination with bodies—sex, sensations, shortcomings–keeps her commentary lively even as her life careens out of control.  Given such diversions, it’s perhaps easy to miss the big picture: the invitation that Sharma is extending to readers to reimagine the possibilities for what a “heroin novel” can be.

Setting this particular heroin novel in a contemporary millennial-generation context, with overeducation and underemployment and Starbucks and Netflix and Craigslist all essential facts of Maya’s existence, is in itself something of a refresh.  It's not at all inaccurate to describe Problems as HBO's Girls meets Irvine Welsh's Trainspotting, as the publisher does on the back cover.

But there’s more to it than that.  Maya wonders whether Peter’s stinginess caused him to select a “thrifty, generic brown” wife instead of a “name-brand white one,” because he wants “the same parts” at a lower price.  She talks frankly about her sexuality, as when she declares Ogden to be her “conquest,” she makes money by “thinking with her crotch,” and she observes differences between her male and female friends' responses when she informs them about her sex work.  And when Maya lashes out at mothers her age posting baby pictures on Facebook, she reveals that her will to oblivion may somehow be related to a deep ambivalence about procreation and the limitations it might impose.  Maybe someday she'll get her act together and be a cool mom that smokes pot with her kid, as she dreams of doing, but for now she's mostly alone, snorting heroin off of a copy of the Bell Jar, as she does in one heavy-handed but memorable scene.  In steering Maya in such directions, Sharma brings themes of race but especially gender powerfully into to the foreground in a way that most heroin novels do not.  Problems may be a heroin novel, but it can and should be read as a work of feminist literature as well.

There’s also the matter of the ending.  Heroin novels, following the inevitable logic of their subject matter, typically end in either sobriety or death.  But Problems doesn’t choose either.  By the story’s close, Maya has recognized that heroin addiction is boring. She has a new, clean roommate and is writing productively again.  A life free of the ups and downs of heroin seems like more of a possibility than it did before, but she isn’t quite there yet, and maybe she won’t ever be.  Real change might strain the detached, couldn’t-care-less stance Maya tries to maintain, even when her tenderness manages to show through.  This, too, represents an interesting subversion of the genre.  Can you have a heroin novel in which the protagonist recovers only a little and grows maybe even less?   A coming-of-age novel in which the coming-of-age is tentative, hesitant, fragile?  This edgy, important book insists that you can.