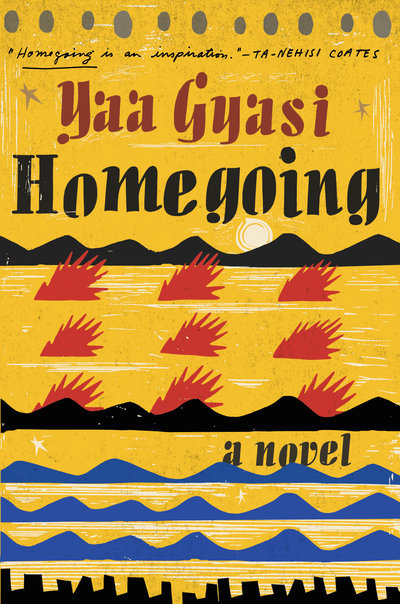 In November, National Book Critics Circle members will begin nominating and voting for the fourth John Leonard award for first book in any genre. In the run-up to the first round of voting, we'll be posting a series of #NBCCLeonard blog essays on promising first books. The sixteenth in our series is NBCC board member Jane Ciabattari on Yaa Gyasi’s Homegoing (Knopf).

Born in Ghana and raised in the U.S., Yaa Gyasi drew inspiration for Homegoing, her first novel, from a trip to her homeland as a college student, where she visited the slave fort known as Cape Coast Castle, infamous portal to the Middle Passage for countless newly enslaved Africans.

Gyasi writes of two half-sisters born of the same mother in different villages on Africa's Gold Coast in the 18th century.  “Separated sisters,” Gyuasi writes, “are like a woman and her reflection, doomed to stay on opposite sides of the pond.” The first sister, Effia, is born in Fanteland in 1744. She marries the British governor and lives with him in Cape Coast Castle. Her son Quey is sent to England to study. Esi, her sister, is the daughter of an Asante leader. She survives the terrors of the slave dungeon in the Castle and the voyage by slave ship to the New World, where her daughter Ness is born on an Alabama plantation.

Gyasi's imaginative journey follows seven generations of Effia's and Esi's descendants through the disruptions and continuing echoes of slavery on both continents. Brilliantly conceived, artfully written, Homegoing distills some 300 years of American and African history into a novel that reads swiftly and lingers.

Jane Ciabattari writes the Between the Lines column for BBC.com and contributes regularly to LitHub, NPR.org, The Daily Beast, the Boston Globe and others. She is vice president/online and a former president of the National Book Critics Circle, serves on the advisory board of The Story Prize, is a member of the San Francisco Writers Grotto and a founder of the [Flash Fiction Collective]. Her articles and book reviews have appeared in the New York Times Book Review, the Guardian, Bookforum, Salon.com, the Paris Review, the Los Angeles Times, the Washington Post, the San Francisco Chronicle, the Chicago Tribune, Ms., Poets & Writers Magazine, among others. She is the author of two story collections, Stealing the Fire (Dzanc Books, 2013) and California Tales (Shebooks 2014). She can be found on Twitter @janeciab.