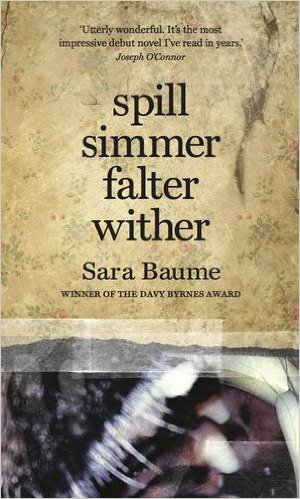 In November, National Book Critics Circle members will begin nominating and voting for the fourth John Leonard award for first book in any genre. In the run-up to the first round of voting, we'll be posting a series of #NBCCLeonard blog essays on promising first books. The ninth in our series is NBCC board member Kerri Arsenault on Sara Baume's Spill Simmer Falter Wither (Houghton Mifflin Harcourt).

A lonely, desolate man (Ray) adopts a lonely, desolate cur with one eye, which he names One Eye, and they live in the lonely, desolate landscape of Ireland’s coast in a murky house owned by Ray’s deceased father. But you shouldn’t feel forsaken by what appears to be a gloomy tale. You will love these broken lives, not just because because they are fallible (like us), or because they eventually become “creatures of possibility”, but because this is a story about what love can do.

Ray thinks: “…with summer comes hope, and with hope comes disappointment.” It is with this credo of paradox Baume approaches her narrative, her characters, the book’s themes, the point-of-view, all of which balance on the thin line between beauty and ugliness, possibility and routine, heartbreak and joy, man and man’s best friend until the seams of those concepts are pressed together like two sides of the same coin. In this constant capsizing of definitions, readers are forced to reinterpret their own boundaries of how to view the world and the people in it. One Eye’s violence toward people and animals feels both repulsive and understandable; shattered bottles become treasures; a happy birthday memory consists of a sad day at the zoo; and an invisible shiny spacesuit makes Ray feel dull. Baume’s language also crosses borders to forge new perceptions of things that can be clichéd: A man’s anger becomes a “cathedral of tea-candles” and “At night, the sheep look like walking headstones” or “the bay is fringed by a phlegm of dirty white weed.” Indeed, I’ll never look at sheep or headstones or tea-candles or the water’s edge in the same way.

Spill Simmer Falter Wither is also an adventure wrapped up in a staycation, and those opposing narratives fit snugly into one another like a literary turducken. Ray and One Eye embark on an unplanned trip to escape their pasts and they don’t go terribly far in real distance; but the real journey is where Ray ventures beyond the confines he’s erected in his blinkered mind. “I realise it’s up to me to follow your example and nurture my own wonder, morsel by morsel,” (148) he says to One Eye. And we see those morsels as we listen to him talk to “you,” which at first is One Eye but eventually becomes you, the reader.

Don’t look for a happy ending. But when does that really happen anyway?

Kerri Arsenault serves on the Board of the National Book Critics Circle and is a founder of the Western Maine Water Alliance. She writes a column for Lit Hub, and her work has appeared in the San Francisco Chronicle, American Book Review, NBCC’s Critical Mass, and Bookslut. She is currently working on a book about Maine.