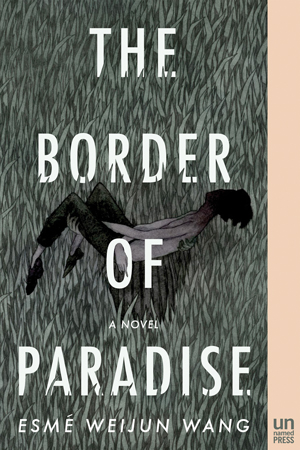 In November, National Book Critics Circle members will begin nominating and voting for the fourth John Leonard award for first book in any genre. In the run-up to the first round of voting, we'll be posting a series of #NBCCLeonard blog essays on promising first books. The fourth in our series is NBCC member Lori Feathers on Esmé Weijun Wang's The Border of Paradise (The Unnamed Press).

In her confident debut novel Esmé Weijun Wang crafts an extraordinary story that explores the ricocheting effects of mental illness, cultural dissonance, and the politics of intimacy.

David is a young man of privileged means growing up in 1940s Brooklyn. His fortunate life is marred by bouts of acute neuroses that incapacitate him and jeopardize his inheritance of the family business. He falls in love with Marianne, a young woman of his social circle, but their youthful romance is thwarted when Marianne’s family sends her away in order to prevent her marriage to the mentally unstable and professionally aimless David. Heartbroken, David travels to Taiwan where he hooks-up with Daisy, the daughter of a whore house proprietress, impulsively marries her, and brings her back to the United States.

As an uneducated, newly arrived immigrant with very little English, Daisy especially is ill-equipped to deal with David’s paranoia and unpredictability, and his sickness only magnifies her confusion and sense of isolation. In the years that follow David keeps his wife and their two children, William and Gillian, isolated from society, secreting them in a comfortable home in the mountains–a situation borne out of David’s paranoia and also his shame over Daisy’s differentness. The remote location of the house and David’s determination to keep his family largely hidden within it produce a gothic atmosphere that Wang’s taut prose accentuates.

The pivot point in the story is David’s carefully planned suicide after which the novel’s narration switches from David to the alternating voices of Daisy, William, Gillian, Marianne, and Marianne’s brother, Marty. This layering of perspectives adds depth to the novel’s adroitly executed plot.

Wang draws upon her own experiences to depict with honesty and empathy what it feels like to be mentally ill and also to be in love with someone who is. The novel’s haunting language creates an atmosphere of inevitable fatality, building-up suspense to accomplish that rare, literary feat—a thrilling story that reveals the skills of a very gifted writer.

Lori Feathers is a freelance book critic, 2017 BTBA Fiction Judge, and an Assistant Managing Editor of Asymptote Journal. Follow her on Twitter @LoriFeathers