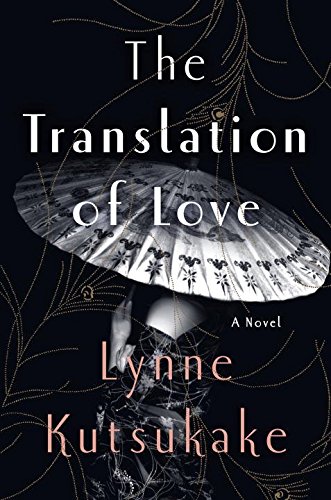 In November, National Book Critics Circle members will begin nominating and voting for the fourth John Leonard award for first book in any genre. In the run-up to the first round of voting, we'll be posting a series of #NBCCLeonard blog essays on promising first books. The fifth in our series is NBCC member Jennifer Bort Yacovissi on Lynne Kutsukake’s The Translation of Love (Doubleday).

My nominee for this year’s NBCC Leonard Prize is Lynne Kutsukake for her debut novel, The Translation of Love (Doubleday), which came out in April. I reviewed this book for the May edition of Historical Novels Review, and recommended it as an Editor’s Choice. Normally I’m most drawn to novels for the strength of their character development; here, the characters are well-developed and believable, but it is Kutsukake’s use of tone to immerse her readers in a specific time and place that sets this debut apart.

The novel follows the storylines of several Japanese, Japanese-American, and Japanese-Canadian characters living—and sometimes barely surviving—in Japan during the post-Word War II American occupation. The stories weave together to create a wide-ranging, detailed portrait of the civilian Japanese experience before, during, and after the war.

Central to the story is General Douglas MacArthur. As one character observes, MacArthur seems almost to replace the emperor in the eyes of the Japanese people. In his role as Supreme Commander for the Allied Powers, MacArthur invites the Japanese to write him letters, and they respond in astounding numbers.

A constant sense of dislocation pervades the novel. Aya, a Canadian schoolgirl whose mother died while the family was interned, has been “repatriated” to Japan with her father but speaks virtually no Japanese. Corporal Yoshitaka “Matt” Matsumoto is a second-generation American who joined the army from an internment camp to prove his loyalty, and, now as part of the occupation force, uses his rusty language skills to translate those letters to MacArthur. Matt’s coworker and fellow American citizen Nancy Nogami happened to be visiting relatives in Japan when Pearl Harbor was attacked; the U.S. never allowed her to return home. For the native Japanese, the social and cultural disintegration they endure in their occupied country is seismic and stark.

This cultural breakdown is most clearly illustrated through the stories of Fumi, who gradually befriends Aya, and Fumi’s sister Sumiko, who naively accepts employment at a dancehall that immediately turns into indentured servitude. When Sumiko can no longer return home, Fumi and Aya write a letter to MacArthur to beg for his help in finding her.

Kutsukake excels in using tone to create atmosphere, to fully evoke a sense of time and place, and to illustrate the clash of cultures. She delivers a nuanced, empathetic, but unsentimental story that considers what it means to rebuild an identity, both as an individual and as a nation.

Jennifer Bort Yacovissi’s debut novel, Up the Hill to Home, tells the story of four generations of a family in Washington, D.C. between the Civil War and the Great Depression. Jenny is a member of PEN/America and the National Book Critics’ Circle, and reviews regularly for both the Washington Independent Review of Books and the Historical Novels Review of the Historical Novel Society. She is serving as chair of the 2017 and 2018 Books Alive! Washington writers conference, and is president of the Annapolis chapter of the Maryland Writers’ Association.