The John Leonard award, honoring a founding member who reveled in discovering new voices (he was the first to champion the work of Toni Morrison, Mary Gordon, Maxine Hong Kingston and Gabriel Garcia Marquez, among others) was created in 2013 to honor a first book in any genre. It is the only NBCC award chosen by a direct vote of all NBCC members. Previous winners include Anthony Marra, for his novel A Constellation of Vital Phenomena, and  Phil Klay, for his story collection Redeployment. This year's award went to Kirstin Valdez Quade, for her story collection A Night at the Fiesta. 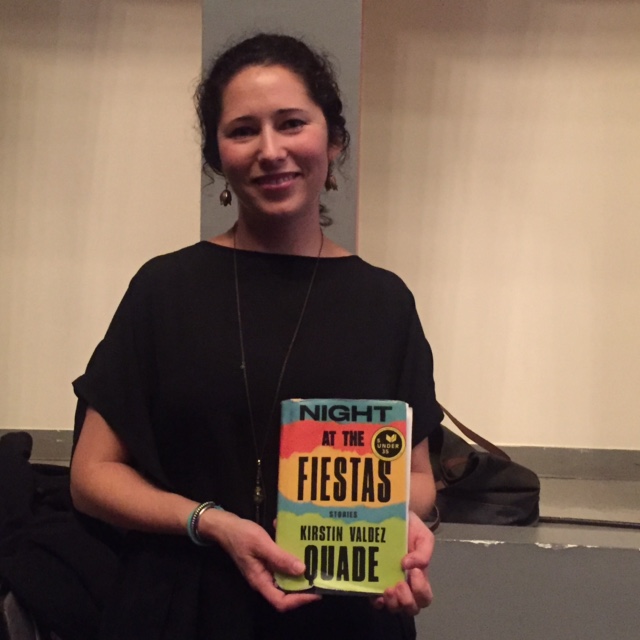 I am incredibly grateful to be here. To have my book chosen from among that amazing list of finalists is such an honor. It is especially meaningful to me that this prize was voted upon by the members of the National Book Critics Circle—people who know books. While we hear a lot about writers, the unsung heroes of the literary world are critics, editors, and reviewers. Thank you so very much for this vote of confidence, and for the important work you do, which is to keep the conversation about literature and ideas urgent and challenging.

Thank you also the New School for hosting this lovely evening, and to the board of the National Book Critics Circle, especially Tom Beer and Jane Ciabattari.

I’m grateful to my marvelous editor, Jill Bialosky, and to the others at Norton who have given my book such a happy home: Bill Rusin, John Glusman, Erin Sinesky Lovett, and so many others.

Thank you also to my superb agent, Denise Shannon. And to my partner, Lydia Conklin, and my mother Barbra, who are here tonight.

And of course, thank you to two important figures in American letters, Sue Leonard and the late John Leonard, who was such a champion of emerging writers and so committed to promoting diverse voices.

As I accept this award tonight, which was named after one great supporter of young writers, I’d also like to express my gratitude to another. The wonderful writer Ehud Havazelet, who passed away in November, was my dear friend and mentor. Ehud is so much a part of Night at the Fiestas—and of everything I write.

Ehud changed the way I think about fiction profoundly. As he engaged with my drafts, he always put the characters first, always demanded that the prose be worthy of the characters, that the story honor their humanity. I will be forever grateful for what Ehud taught me, and even more grateful for his friendship.

Ehud is there with me every time I sit down before my computer: uncompromising, hilarious, cranky, and unfailingly supportive. Always, he holds me to incredibly high standards. As I type, I hear his despairing voice: for god’s sake, Kirstin, why would you write a line like this? It’s true that there have been times when I wanted to shake him out of my ear, when I wanted him to quit pointing out my slack lines and useless prepositions.

But his voice in my ear is what makes my work better. Write toward the pain, he says. Don’t look away just because it hurts. Don’t look away. In his own fiction, he modeled the hard work of witnessing.

Don’t look away, Ehud says as I struggle with a draft, and this voice gives me the courage to be present on the page.

Thank you so very much again for this honor.