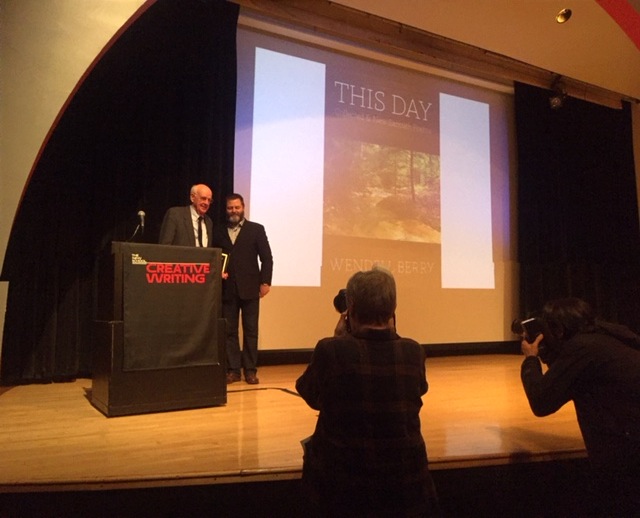 I would like to sincerely thank the board and the members of the National Book Critics Circle for inviting me to introduce this year’s recipient of the Ivan Sandrof Lifetime Achievement Award, Mr. Wendell Berry. I consider it to be an intense privilege, and hope that I have taken a tolerable stab at what was meant by “business casual”. Mr. Berry has been around for 81 years or so, and in that time he’s given us eight novels, several dozen short stories, twenty-eight volumes of poetry and 31 books of nonfiction. Tonight we are celebrating a man who apparently does not like to nap.

The list of accolades already bestowed upon him and his writing is chock full of richly deserved reverence and gratitude, is as long as my arm, and would no doubt be as tedious to hear me enumerate as it would be delightful for me to skip. The kind of awards with words in their titles like National, Poet, Guggenheim, Kentuckian, Humanities, Stegner, Servant and Jefferson. The type of awards that’ll get your hand shaken by the president, and people even smarter than that.  I don’t personally know Wendell Berry that well, but I have had the pleasure to know him a little bit; well enough to guess that there are likely things he’d rather be doing than to sit in a New York City ballroom listening to a kid from Illinois pay him compliments. I also happen to know that some new lambs are arriving imminently in Kentucky, their farmyard itinerary inexorably unfolding, fully heedless of the possible pertinence of these, my remarks. I would reassure the lambs, if I could, that this to-do was not my idea.

But, to the matter at hand. Wendell, I’m sorry to put you through this, but I ought to point out that it’s you alone who have made your bed, and now you are going to have to sleep in it. With me, as it turns out.

I first wrote to Mr. Berry in 1995 asking his permission to let me adapt his story “Fidelity” into a film. He said no. I am an actor first, so I was of course able to take that as a compliment, and thus our acquaintance has survived.

Ladies and Gentlemen, to my way of thinking, this exceptional lifetime achievement –  as farmer, poet, husband, citizen, novelist, neighbor, essayist, father, son, grandfather, pacifist, brother and fisherman – with the disposition of a philosopher king – would not have so occurred had it not been for two imperative life choices.

The first and most consequential of these was of course his marriage to his bride Tanya in 1957. I misspoke when I said that he alone had made his bed, because he and Tanya have tucked in the bedclothes together now for nigh on sixty years. They have each been responsible for 50% of the bed-making, and if there has in fact been any deviation from that ratio, well, that is their business. They’re still together, so they clearly must have hit upon an accord of some stripe.

However, as Mr. Berry is to be rightly and fulsomely lauded for the achievements he has compiled, I vow that his marriage must be cited in the same breath, for in many ways, marriage and fidelity are the central themes at the root of Mr. Berry’s life’s work; literal marriage between two people, yes, but also our undeniable betrothal to the natural world, and our responsibilities to that bed as well.  As he tells us in his essay The Body and the Earth,

No matter how much one may love the world as a whole, one can live fully in it only by living responsibly in some small part of it. Where we live and who we live there with define the terms of our relationship to the world and to humanity. We thus come again to the paradox that one can become whole only by the responsible acceptance of one's partiality.

Now, I have to apologize to you, for having the temerity to choose a passage of Mr. Berry’s text to read out loud. It’s not that it isn’t beautifully wrought, it’s just that with every word I transcribe, I am then reminded of two other passages I’d like to tell you about, plus a song from Burley Coulter. And then I begin to cry – I suppose with gratitude, although the true source of my emotion is perhaps beyond my comprehension. It feels like coming home after a long time away, if you’re lucky enough to live in a home made by the kind of people in his stories of the Port William Fellowship. Like you’re coming home to the Feltners… It’s the sort of crying that feels really good, and let’s leave it at that. I also happen to know that Mr. Berry doesn’t like to hear his stuff out loud, so I apologize to him as well, and I’ll try to keep it to a minimum.

Trying to live in a manner that pays fealty to our marriages in every sense of the word continues to become more and more of a conundrum with every passing year in a world lousy with innovation, isolationism and rampant consumerism. As our gentle reporter, sometimes frank, sometimes outraged and sometimes lyrical, but always honest – staunch – patient – observant – Mr. Berry has had more than enough fodder to fuel his prolific output, as he has remained married both as a husband and in husbandry to the pastoral acres he and his family farm in Henry County, Kentucky. Which brings me to the second imperative life choice.

After an exciting early career of writing and teaching, including stints from Stanford to Italy, and France to New York City, Wendell Berry realized that he would prefer to lace on his boots and roll up his sleeves and perform his life’s work in the home place and with the home people he knew best. More than that, it now seems clear that his work was only going to fully blossom if he was gazing through a forty-pane window overlooking the Kentucky river.  What a good and wise choice he made. He applied his life to his home and his home in turn applied his life to him, and they are still dancing together. The fruits of his fidelity are clearly printed, widely available, and are the reason we are here to crow about him.

I recognize that I should begin to head us back in to shore, since my introduction cannot help but be insufficient. How could one hope to succeed in such a task? “Ladies and Gentlemen, I give you the Mississippi River.”

Our humble honoree would no doubt claim that he himself has not yet succeeded in covering everything there is to illuminate, but those of us paying attention would have to argue that he has taken a pretty damn fine swing at it, and he has not yet hung up his cleats.

Mr. Berry’s book Life Is a Miracle contains, among other things, a very thoughtful refutation of another book by Edward O. Wilson entitled Consilience. Before delivering Mr. Wilson one of the most considerate ass-kickings I have ever read, Mr. Berry makes this disclaimer:

I am aware how brash this commentary will seem, coming from me, who have no competence or learning in science. The issue I am attempting to deal with, however, is not knowledge but ignorance. In ignorance I believe I may pronounce myself a fair expert.

He steadfastly reminds us – first, that we are human, and therefore fallible. Then he reminds us that we can never know everything, and so we must make a go of it in our half-knowledge, and with this as our starting point, why then don’t we slow down a minute and love one another. As he so sweetly states, “It all turns on affection.”

Dear Mr. Berry, if you are ignorant, then what on God’s green earth are we, your ardent fans and students? I guess we’re to understand that you are ignorant like Socrates was ignorant.

What did the rest of us do when we first comprehended the odes of Keats? When we heard the triumph of Beethoven’s Eroica Symphony? When we beheld the newly inked Declaration of Independence? When faced with the enormity of such moments of inspired human goodness, there is little to do but applaud through our delighted laughter and our tears, and pay heed to these signposts so erected that we, too, may seek a path that might enlighten rather than destroy, so that we each may do our best to leave our small place on Earth nicer than we found it.

We like people who can tell it like it is. Those who most effectively wield this ability, gently holding up a mirror to our selves with patience, creativity and compassion, comprise the body of women and men whom we consider to be our best writers; the select few whose gift allows all humanity to feel that this writing is specifically referring to them.

Tonight we want to make this writer feel our gratitude for the ways in which his telling of the truth have made us feel. When such a writer so skillfully imparts the very things that we have forgotten that we need to hear, with a candor that is sometimes tricky to register at first through the din of contemporary distractions, but, once we have caught the tune of the thing and felt it thrilling our very blood to epiphany and stark understanding… then we call that writer Wendell Berry, and we say thank you for your lifetime achievement. Ladies and Gentlemen, Mr. Wendell Berry.

Nick Offerman played Ron Swanson, the parks director, on Parks and Rec. Wendell Berry is among the personal heroes he profiled in his book Gumption. Offerman also co-produced a new documentary on Berry, The Seer, directed by Laura Dunn with executive producers Robert Redford and Terrence Malick.