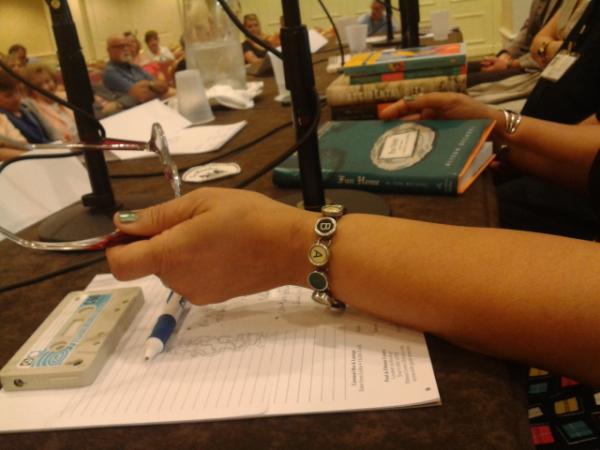 What’s your favorite comic novel? This NBCC Reads question sparked a LOL round-robin conversation to wrap up this year’s Tennessee Williams Festival at the Monteleone Hotel in New Orleans. We were the warm-up act to the traditional “Stanley and Stella” shouting contest (winners here). We followed the “Cityscape” panel, which featured NBCC autobiography finalist Sharifa Rhodes-Pitts, author of Harlem Is Nowhere, and was moderated by NBCC member Susan Larson, the Tennessee Williams Festival’s Vice President for Literary Programming.

First up was Joshua Clark, a finalist for the NBCC autobiography award for his Katrina memoir, Heart Like Water. Clark was born and raised in Washington, D.C. In keeping with the comedy of the moment, he offered this bio: “When he was 17, Clark told his mom he was going to a friend’s house for New Year’s Eve. That much was true, but what he didn’t tell her was that his friend’s house was in New Orleans. After being in a brawl on Bourbon Street (he doesn’t remember the ‘brawling’ part, just waking up with a broken nose, finding his best friend sleeping in a hotel hallway because he at last found the right room number, only to find it was the wrong hotel… He decided New Orleans was the place for him. He has spent the last ten years writing, editing, publishing, and coming up with excuses to keep himself there at all costs.”

Clark's choice: Joseph Heller’s Catch-22, published a half-century ago (he wrote about it on Critical Mass).

He read, with voices for multiple characters, the scene when the Colonel is questioning Metcalfe in a makeshift military court, which begins:

“Well, Metcalf, suppose you try keeping that stupid mouth of yours shut, and maybe that's the way you'll learn how. Now, where were we? Read me back the last line.

” 'Read me back the last line,' ” read back the corporal who could take shorthand.

” Not my last line, stupid!” the colonel shouted. “Somebody else's.”

” 'Read me back the last line,' ” read back the corporal.

” Oh, no, sir,” corrected the corporal. “That's my last line. I read it to you just a moment ago. Don't you remember, sir? It was only a moment ago.”

Next up: Amy Dickinson, who writes the “Ask Amy” advice column (syndicated in 200 newspapers, read by an estimated 22 million people daily).  She is author of the New York Times bestselling memoir, The Mighty Queens of Freeville, and is a regular featured panelist on National Public Radio’s comedy quiz show, “Wait Wait, Don’t Tell Me.” She has performed at The Moth and once sang “Take Me Out to the Ballgame” in front of 45,000 people at Wrigley Field during a playoff game.

Dickinson reminisced about her time as a receptionist on the eighteenth floor at The New Yorker as a prelude to reading from Jay McInerney’s 1984 novel, Bright Lights, Big City. (McInerney was a New Yorker fact checker, as was the novel’s narrator.) Did the novel have legs? As she read, it was obvious from ripples of laughter at the second person opening–“You are not the kind of guy who would be at a place like this at this time in the morning. But here you are, and you cannot say that the terrain is entirely unfamiliar, although the details are fuzzy.”—and at the image of  “your brain composed of brigades of tiny Bolivian soldiers” badly in need of Bolivian Marching Powder, that this comic novel had stayed fresh for nearly two decades.

The third panelist: San Francisco-based Jewelle Gomez, author of what she called an “unfunny lesbian vampire novel,” The Gilda Stories and the forthcoming comic novel, Televised, the story of the 30th anniversary reunion of a group of Black student activists from the 1960s.  “Not funny when it was happening back then but the only way to relive it is through a comic filter,” as she puts it. She chose an NBCC autobiography finalist for her favorite. Alison Bechdel’s Fun Home, a graphic autobiographical novel by the author of the “Dykes to Watch Out For” comic strips. Gomez praised the books for “attention to detail,” and interspersed her reading with descriptions of the comic panels.

Last up: Ted O’Brien an independent bookseller who hosts a radio program about books, is a media escort and a writer, “though I haven't written anything funny…intentionally.” (His first published story appears in New Orleans Noir, in the Akashic Books series.)

His favorite? John Kennedy Toole’s A Confederacy of Dunces, the New Orleans classic that won the 1981 Pulizer. (Last week The Millions ran a piece about the search for the lost manuscript of this posthumous work.) O’Brien noted that the novel was particularly popular in Holland. And that the author committed suicide.

“You're bringing us down,” said Gomez.

So O'Brien lifted the mood by reading passages about Toole’s Ignatius Reilly and Myra Minkoff of the Bronx, his grad school sidekick, with lines like “Myrna's cure-all for everything from fallen arches to depression was sex,” rousing the audience yet again to laughter.