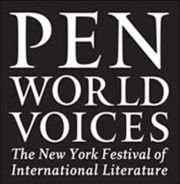 The disembodied voice of Hungarian singer Bea Palya filled the darkness at the venerable night club Webster Hall as she emerged from the back alongside the audience, singing raw, no microphone, no spotlight, in a warmly eloquent voice. She was the most self-possessed of all the performers at PEN’s second cabaret. (Writers, containing multitudes, are rarely as comfortable within their own fleshly bodies as she.) Palya took a microphone, singing playfully in front of the first table (where Rick Moody slumped as if to escape the unexpected shared spotlight, although he was onstage later with John Wesley Harding, aka novelist Wesley Stace).

Palya then took the stage, taught the audience to sing and clap along (not ready for foot stamping, this crowd). Sitting at another table, novelist Ian McEwan, off duty for the evening, clapped along. At one point she assembled from the attending amateurs a chorus of ooohs and tongue clicks and loud kisses as she sang a Hungarian love song. Hungarian novelist Peter Esterhazy, at another table, threw back his head and laughed (he was one of the few in the audience who understood the lyrics).

The voice of novelist Aleksandar Hemon, reading from “The Lazarus Project,” his new novel published two days ago, was strong and accented with his Sarajevo roots and funny in a dark Bosnian bluesy way, a novel propelled by voice.

Palya was preceded by Tony award winning dancer Bill T. Jones, who moved sinously across the stage and back a single time while reciting in a sonorous voice the lengthy Dylan Thomas poem “The Ballad of the Long-Legged Bait,” so that by the time he came to the end, he was back where he started. The end, for those who missed it:

There is nothing left of the sea but its sound,
Under the earth the loud sea walks,
In deathbeds of orchards the boat dies down
And the bait is drowned among hayricks,

Land, land, land, nothing remains
Of the pacing, famous sea but its speech,
And into its talkative seven tombs
The anchor dives through the floors of a church.

Good-bye, good luck, struck the sun and the moon,
To the fisherman lost on the land.
He stands alone in the door of his home,
With his long-legged heart in his hand.