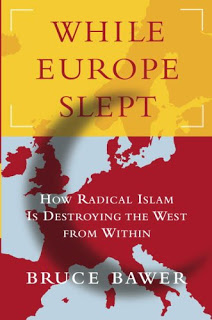 Today's posts will focus on Bruce Bawer's “While Europe Slept: How Radical Islam is Destroying the West from Within,” a finalist for the 2006 NBCC prize in criticism.

NO BOOK HAS STIRRED more controversy at the NBCC this year than “While Europe Slept: How Radical Islam is Destroying the West from Within” by Bruce Bawer. How come?

Where most works of criticism explore fixed objects such as books or paintings, Bawer's book focuses on an evolving situation involving hot button issues such ethnicity and religion, culture and assimilation. Where most works of criticism are almost exclusively interpretive, Bawer's is also speculative — he considers the current and future impact of Muslim immigration on European culture. Where one might expect Bawer to assume an even tone while navigating this minefield, he offers urgent prose that challenges widely held ideas.

“While Europe Slept” is a work of cultural criticism born of personal experience. After publishing a withering critique of the values and increasing political power of Christian fundamentalists in the United States (“Stealing Jesus,” 1997) Bawer, who is gay, moved to Europe because of its enlightened social policies, especially its embrace of same-sex marriage. During his eight years in the Netherlands and Norway, where he still lives, Bawer became disturbed by what he began to perceive as the dark side of Europe's celebrated tolerance.

Combining personal experience with extensive research, Bawer begins with a basic observation: like many immigrants, Muslim newcomers carry different religious and cultural values to their adopted countries. Some Muslims, he argues, bring attitudes and beliefs — which can include prejudice and religious intolerance, arranged marriages, honor killings and a disdain for Enlightenment values — that are unacceptable. In the past, Bawer argues, the powerful forces of distance and assimilation would have mitigated these practices and beliefs. Today, modern technologies such as satellite TV and social policies encouraging family reunification allow immigrants to stay tethered to their native cultures as intimidating fundamentalist leaders demand they hold to traditional beliefs.

In addition, Bawer argues, deep-seated racism prevents indigenous Europeans from encouraging assimilation. They would rather “tolerate” dangerous behaviors than accept Muslims as full members of society. “Immigrants to Europe are allowed to perpetuate even the most atrocious aspects of their cultures,” he writes, “but the flip side of this is
that no one, including themselves, will ever think of them as Dutch or German or Swedish.”

Some demographers say Europe is destined to become a Muslim-majority
continent, perhaps as early as 2050. In “While Europe Slept” Bruce Bawer offers provocative — and controversial — arguments about that momentous change.