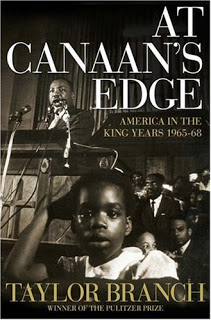 Today's posts will focus on “At Canaan's Edge: America in the King Years 1965-68” by Taylor Branch (Simon & Schuster), which is a finalist for the 2006 National Book Critics Circle Award for biography.

How to engage a crowd of 900 gathered in Chicago’s Orchestra Hall to hear Louise Erdrich and Taylor Branch speak about their experiences as writers? How to create common ground between two authors who are both gifted (and both winners of the Tribune’s annual literary prizes), but also very different?

Within moments on stage, Louise Erdrich mentioned that she sometimes cried while writing. Silence. Taylor Branch, looked at her and said, “I cry, too.”

From that point, the session seemed more like a religious revival than a literary event. A member of the audience told me later that when Branch spoke, it seemed that Martin Luther King had risen from the dead and anointed Taylor Branch as his biographer.

The final book in his trilogy of Martin Luther King’s life and times, “At Caanan’s Edge”, adroitly captures the last stages of King’s life and the Southern minister’s fitful, but electrifying, elevation into a national figure. Chicago may have repressed its collective memory of King’s time in the city but Taylor Branch’s book will ensure that this chapter, like so many in our national history will be remembered – and understood.

Forty years ago, when King brought his battle against poverty and racial segregation northward, as Branch tell it, King declared: “It is in Chicago that the grapes of wrath are stored.” He moved his wife and children into a third-floor walk-up tenement, deep in Chicago’s neglected west side. Branch tells the story so vividly that a reader can almost smell the stench of the building, hear the rage of protesters who opposed King’s presence, and feel the urgency of the civil rights movement. Readers cannot help but wince as Branch describes King falling to his knees, having been struck with a rock while trying to lead an integrated group of marchers into Marquette Park. We understand when King says, “I have never in my life seen such hate.”

A master narrator, Taylor Branch enhances the power of these intimate depictions by rooting them in historical context: the clashes surrounding King took place alongside the escalation of the Vietnam War and in a nation bitterly divided on many fronts. King struggled against the palpable hostility of those who shared his goal but not his methods, calling his effort “too Sunday School” to make real change.

“At Canaan’s Edge” may span just three years, but its interwoven stories — which feature a dramatic cast of characters ranging from Lyndon Johnson and Richard J. Daley to Stokely Carmichael – create a sweeping story line.

History that is both epic and intimate defies neat definition. Taylor Branch, who is originally from Atlanta, was both touched by the civil rights movement and separate from it. That tension and his own curiosity have allowed him to inhabit Martin Luther King, Jr.’s world since 1982. Today we celebrate “At Canaan’s Edge,” the final title in Branch’s wrenching and eloquent depiction of one man’s – one movement’s – unforgettable crusade.

— Elizabeth Taylor, NBCC Board member and Literary Editor of the Chicago Tribune