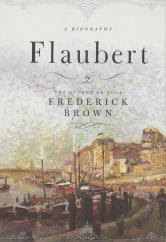 Today's posts will focus on “Flaubert: A Biography” by Frederick Brown (Little, Brown), which is a finalist for the 2006 National Book Critics Circle Award for biography.

In mid-nineteenth-century France, law school “was the course usually prescribed for upper-class boys with literary aspirations,” Frederick Brown notes in his in Flaubert: A Biography. Young Gustave Flaubert had been duly enrolled at the the Ecole de Droit in Paris (his father, Achille-Cleophas Flaubert, was a noted physician in Rouen and had amassed significant property as well), and yet several weeks into what should have been his studies, he still had not opened his law books, and proclaimed that he would “preserve their virginity until as little time before the July exam as needed to make a credible pretense.” Gustave scraped by on that first exam, only to fail at his second. He dallied in preparing another attempt to pass grade, but before he could mount one he experienced the first of a series of epileptic seizures that were to plague him for life — losing consciousness, he had been swept off in “a torrent of flames,” as he described it. In this case, affliction, rather than robbing the world of a great novelist, provided one instead.

For Gustave, “that sickness offered the possibility of a life in art,” Brown argues in Flaubert, a National Book Critics Circle finalist in biography. Once Flaubert decided he was irremediably sick and would therefore abdicate “practical life,” he told his friend Alfred Le Poittevin that he was at peace with himself. He would seek a perfect self-possession through art, in which he would later describe — with some hyperbole — the ideal work as a book about nothing, “upheld by its own internal force of style,” for “the closer expression hugs thought, the more words cleave to it and disappear, the more beautiful it is. Therein lies the future of Art.”

Flaubert, despite his seizures, lived a life freighted with extensive and extensively annotated sexual adventure (he had a penchant for prostitutes and older women, most notable among the latter Louise Colet, eleven years his senior, with whom he had a long, hot-and-cold entanglement that Brown characterizes as “tortured intimacy”); he engaged in rigorous and extensive travel in Egypt and the Levant with his durable companion, the writer and journalist Maxime Du Camp; and formed strong friendships with Emile Zola, George Sand and Ivan Turgenev. He told the last two that they were the only mortals with whom he could unburden himself. Brown evokes these relationships with nuance, careful to point out where inference is at work; much correspondence between the principals survives, and it is well utilized to integrate original voice where possible, rather than feed us purely twenty-first century voiceover.

Brown’s biography has the luster of being exhaustive without the tarnish of being exhausting. Since we watch Flaubert’s life embedded in the shifting French political environments of the post-Napoleonic world — he was witness to uprisings in Paris in 1848, and lived through the Franco-Prussian war later in life — Brown’s book becomes an intriguing socio-political sketch of the times as well. When it comes to Flaubert’s literary output, Brown’s focus is skewed to the facts surrounding its creation and the social context of its reception, rather than engaging in extensive psychological guesswork, a refreshing approach.

The outlines of Flaubert as a character have long been known: Tobacco fiend, white bearskin stretched on his study floor (and rather bearlike himself, physically), living at Croisset with his mother all those years (he remained unmarried, and told his mother that “I feel I shall never love another woman as I love you”), reading his works aloud to friends, lover of the classics, enduring a trial for the moral failings of Madame Bovary, etc. But this Flaubert is consistently engaging and illuminating at the level of smallest detail, as many critics have remarked.

In a long piece for The New York Times Book Review, James Wood termed the book “clearly the Life for this generation” and credits Brown’s lack of an agenda, writing that the biographer “simply opens himself up to Flaubert’s colossal contradictions.” Writing in the Times Literary Supplement(London), Victor Brombert remarked that from the book’s opening paragraphs “we know that we are in for a treat,” and saluted Brown’s “impressive capacity for documentation.” And Julian Barnes, writing in The New York Review of Books, contends that “This is the biography which will best help us to understand Flaubert's reactions to the ceaseless political turmoil of his life.”