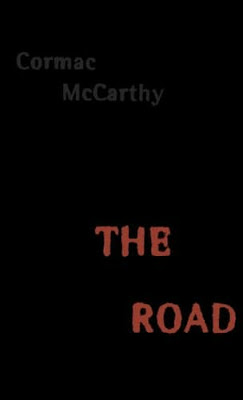 How cool is Cormac McCarthy (not to be confused with the folk-n-blues artist of the same name)? He's only slightly more press-friendly than Thomas Pynchon — as far as I can tell he's given two interviews in the past 15 years, one to the New York Times (“'It's very interesting to see an animal out in the wild that can kill you graveyard dead,' he says with a smile”) and one to Vanity Fair (for which I can't find a link). He's a writer of towering gravity and self-possession (my greatest fear for him is occasional over-earnestness) whose output consists almost exclusively of major works. And in his seventies (b. 1933) he's recalibrating the huge, precise machinery of his prose to produce something remarkably similiar to genre fiction: the serial killer thriller No Country for Old Men, and the Mad Max post-apocalypse The Road, which is a finalist for the 2006 National Book Critics Circle prize in fiction.

To repeat myself: in The Road McCarthy, a writer of near-infinite dignity – he's pretty much the last living Modernist novelist – took on a trash-movie genre, the post-apocalyptic nightmare, the stuff of which Kevin Costner's Waterworld was made. (Kazuo Ishiguro pulled off a similar feat, only with clones, in the equally crushing Never Let Me Go, also an NBCC finalist.) The heroes are a father and a son, trudging across earth out of which every living cell has been burnt, going nowhere, with nothing to hope for. McCarthy goes whole hog: cannibalistic marauders, blast victims left smoldering in their charred clothing, the works. He never condescends to his premise. He commits to it totally and unwinkingly. He makes damn sure you feel ever inch of what humanity lost when the bombs fell, and why we lost it, and what the slow ensuing death will be like, and why most of us didn't deserve what we had in the first place.

Of course, like all good science fiction, The Road isn't really about the future at all: it's about the present. I have the distinct impression that The Road is what the world looks like to McCarthy right now. To him the apocalypse has already occurred, and the rest of us are just beginning to figure it out.