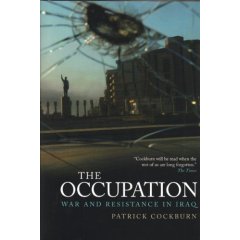 Here's a short passage from “The Occupation: War and Resistance in Iraq,” a finalist for the 2006 NBCC award in nonfiction:

My favorite military spokesman was Brigadier General Mark Kimmit, who specialized in steely-eyed determination. He liked to illustrate his answers with homilies drawn from the home life of the Kimmit family. One day, during the first year of the occupation, an Iraqi journalist complained that US helicopters were scaring children in Baghdad by roaring low and fast over the rooftops. In fact, the pilots had started flying so low to make it more difficult for guerillas to shoot them down after several had been hit, mostly around the town of Fallujah, by shoulder-fired heat-seeking ground-to-air missiles. But in answering the Iraqi's question General Kimmit wanted to draw a deeper moral. The general said he had spent most of his adult life 'either in or near military bases, married to a woman who teaches in the schools,' and that on these bases 'You often hear the sounds of tanks firing. You often hear the sound of artillery rounds going off.' Yet Mrs Kimmit, the general continued proudly, had been able to keep her pupils calm despite the constant thundering of the guns by 'letting them understand that those booms and those guns were simply the sounds of freedom.' General Kimmit urged the Iraqi journalist to go home and explain to his children that it was only thanks to the thundering guns, those sounds of freedom, that they were able to enjoy a free life

— from “The Occupation,” by Patrick Cockburn