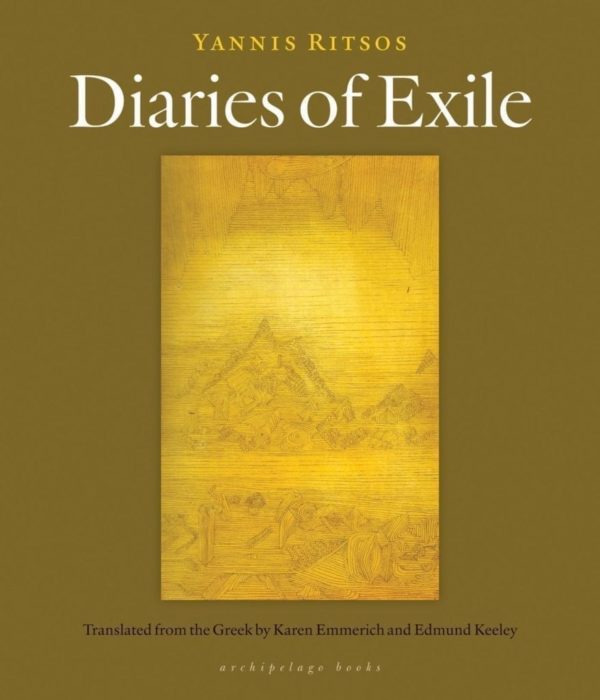 What are your favorite works in translation? That's the question that launched this summer's NBCC Reads series, which draws upon the bookish passions of NBCC members and honorees. We're posting the last batch this month. (Previous NBCC Reads series dating back to 2007 here.)

Beginning in the fall of 1948 and toward the end of a five-year civil war, Greek poet Yannis Ritsos was arrested and sent to a detention center for political prisoners on the island of Lemnos. So began four years in prison camps, during which time Ritsos found (as he recommended decades later to a friend) “therapy or salvation” in his work. Along with other poems and many letters, Ritsos wrote the three Diaries of Exile while on Lemnos and in the much larger, harsher re-education camp on Makronisos to which he was moved in 1949. The diaries were published in Greece in 1975, after Ritsos endured another period of banishment and house arrest, and have been translated into English by Karen Emmerich and Edmund Keeley (Archipelago Books, 2013).

The poems in the diaries are brief and have no titles other than the date of their composition. Recurring images—thorns and barbed wire, sunset and night, the sun and the moon, cats and mice, cigarettes, windows, the wind and bitter cold, overcoats and blankets—attest to the narrowness of experience in prison. Ritsos’s speaker witnesses his own and others’ grief, anguish, sense of tedium, and alienation, but never complains or indulges in self-pity. Rather, the speaker accepts things as they are, including the longing and desolation with which he infuses things, as in the first stanza of the first poem:

There are so many thorns here—

all along the length of the day, even into sleep.

I love how quickly the actual thorns in the first two lines become metaphorical thorns in the third. “I want to give objects a meaning / they don’t have,” confesses the speaker toward the beginning of the second diary; yet I trust the meanings he gives things. Though the meanings may not reside in the things themselves, they reveal his care for them, as well as his own continuing emotional engagement with the stuff of life, however limited it may be, and however much suffering it may comprehend.

The stool has its patience.

assumes the weight of the unspeaking.

The poems in the third diary, written on Makronisos, are bleaker—full of warnings, dread, and death, such as

Your mistake is that you don’t want to die.

But maybe the dead feel hunger too.

everything’s going to be fine.

His heart said so.

down in the deep water

with the blind seaweed.

Unlike Manolis, the poems in Diaries of Exile make no hopeful claims. Nevertheless, their very existence testifies to the possibility of spiritual survival in extremity.