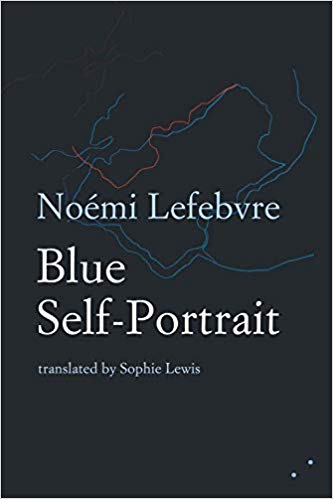 What are your favorite works in translation? That's the question that launched this summer's NBCC Reads series, which draws upon the bookish passions of NBCC members and honorees. (Previous NBCC Reads series dating back to 2007 here.) Tell us why you love the book (in 500 words or less) be it a new one, like Sayaka Murata’s quirky little novel, Convenience Store Woman, or something a bit older, such as Stefan Zweig’s evocative memoir, The World of Yesterday.'The deadline is August 3, 2018. Please email your submission to NBCC Board member Lori Feathers: lori@interabangbooks.com

Asking me to choose a favorite book in translation is asking me whether I prefer beaches to mountains, whether dahlias are prettier than nasturtiums.   I have my beloved translated classics, and am thoroughly delighted by the widening range of books available to English language readers.

Blue Self Portrait, by Noémi Lefebvre, recently translated from French by Sophie Lewis, is a slim, provocative novel that asks:  Is there art without obsession?  It is  narrated by a young woman flying between Berlin and Paris.  She sits with her sister, a violinist, and fixates on her love interest, a pianist-composer.  Lefebvre transmits the narrator’s obsessive nature through sentences that are pages long with scant punctuation, and cascades of spiraling, stream-of-consciousness thoughts.  The pianist-love interest spurs a mental whirly gig through German intellectual and cultural history, Nazism; music, art, and language; and sex and relationships, including the narrator’s failed marriage and her overbearing former mother-in-law.  All this, in fewer than one hundred fifty pages.

Blue Self Portrait is inventive and funny—as well as clever—cycling at breakneck speed through the atrocities of the Twentieth Century while staying connected to the narrator’s primary obsession: the pianist.  It may not be a big leap to go from the Wannsee Conference (synonymous with “Final Solution”) to Reinhard Heydrich, who convened Wannsee and was the only senior Nazi official to be assassinated.  But segueing from there to the narrator’s pianist love requires a creative twist—

…you can’t play any of that romantic, so-called classical music as if the Heydrichs had not existed, he [the pianist] would say giving his angelic smile before launching into Beethoven, without letting up would explain in his polite and respectful manner to the Auditorium audience which was there to listen to classical music and not to hear a pianist saying that to play Beethoven you must know not only Beethoven but also the Heydrichs…

Lefebvre’s novel is layered with music.  It is inspirited with Arnold Schoenberg, the seminal Twentieth Century Viennese composer and sometime painter, whose self-portrait gives the book its title.  With his invention of twelve-tone music, Schoenberg broke out of what he perceived as the shackles of classicism.  He used serial patterns (“rows”) derived from the twelve chromatic notes of the scale—think white and black keys on a piano keyboard.  A victim of Nazism, Schoenberg was forced to emigrate to the United States in the 1930s, where for nearly two decades he trained a generation of prominent composers.

Blue Self Portrait’s literary rendering of Schoenberg is one of the many pleasures of this book.  The translator notes that Lefebvre probes how we can remember the most shameful ideas of the last century by weaving “her text in approximation of a serialist piece.”  Yet against the Twentieth Century’s sobering background, the narrator affects a seeming detachment.  Translator Sophie Lewis concludes this is the narrator’s means to hide an obsessive personality.

Funny that one of the keys to this novel should be not caring.  Our heroine is castigated repeatedly, and repeatedly berates herself, for the crime of “désinvolture.”  What is this elegant French notion?  Why, nonchalance, insouciance, of course.  Plain old frivolity, laidbackness, devilmaycareism, happy-go-lucky style; in the plainest English, it’s not caring.  But she does care—hence all the obsessing….  [t]his term so often reiterated it counts more as a musical leitmotif than a point of prose argument.

This “not-caring” musical leitmotif, combined with sentences of prodigious length and a fixation on history’s ills, are Lefebvre’s tools to convey obsession.  Music mirrors and underscores the obsession.  Is it notable that the writer is French?  The cultural references—from sophisticated to obtuse—that saturate Blue Self-Portrait are not generally the stuff of American novels.  Obsession may be universal, but without Sophie Lewis we’d miss out on this French version.

Martha Anne Toll’s nonfiction appears regularly on NPR and in The Millions, and in Heck, [PANK], The Nervous Breakdown, Tin House blog, Bloom, Narrative, Cargo Literary, and Washington Independent Review of Books; her fiction in Catapult, Vol.1 Brooklyn, Yale’s Letters Journal, Slush Pile Magazine, Poetica E Magazine, Referential Magazine, and Inkapture Magazine. Her novel in progress, represented by the Einstein Literary Agency, was short listed for the 2016 Mary Rinehart Roberts fiction prize. She directs a social justice foundation focused on preventing and ending homelessness and abolishing the death penalty. This essay is adapted from "Obsessions Is Universal," in The Millions. Please visit her at marthaannetoll.com; and tweet to her @marthaannetoll