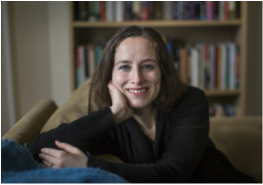 Ruth Franklin is a book critic, former editor at The New Republic, and the author of two books: Shirley Jackson: A Rather Haunted Life (2016), which won the National Book Critics Circle Award for Biography and was named a New York Times Notable Book of 2016, and A Thousand Darknesses: Lies and Truth in Holocaust Fiction (2011).  Franklin’s work appears in many publications, including the New Yorker, the New York Times Book Review, the New York Review of Books, and Harper’s. She is the recipient of a Guggenheim Fellowship in biography, a Cullman Fellowship at the New York Public Library, a Leon Levy Fellowship in biography, and the Roger Shattuck Prize for Criticism.

What's one recent piece you're especially fond of and why?

I realize this is a column about criticism, but I’m particularly proud of a profile of Tracy K. Smith, the current U.S. poet laureate, that I wrote for the New York Times Magazine back in April. I’ve always been fascinated by the creative process—how exactly did it come about that this particular person made this particular work of art?—and Smith was very open about sharing her thoughts about her poetic method. I enjoy the challenge of weaving together criticism and profile writing to produce a different kind of reflection on a book and its author.

Now more than ever, I think the critic’s role is to suss out books and authors who aren’t being given the attention they deserve and make a case for their importance, rather than to codify canons or reaffirm popular taste. As the publishing world is becoming more centralized and conservative, it’s the responsibility of critics to push back: to reject the same-old “Great American Novels” dressed up in new guises and seek out what’s new and exciting.

To give my audience a sense of what it feels like to read a particular book. I try to convey not just the thoughts it prompted in me but the reading experience itself.

How do you think your reviewing style has changed?

To be honest, I used to be a lot more comprehensive. My first assignment from the New York Times Book Review was a novel by Stewart O’Nan—his eighth. You can believe I painstakingly read my way through each of its predecesors! Unfortunately, I don’t usually have time anymore to be that thorough. But I’m also not convinced it’s necessary. Few of my readers will have read every single word an author has written. Sometimes it’s actually better to know less about a person’s previous work—that way it’s easier to avoid preconceptions.

I publish in a lot of different magazines—Harper’s, the Atlantic, the New Yorker—and have had great experiences with all my editors. For sheer fun, my favorite outlet right now is probably New York magazine—their writers manage to make a convincing case that serious literature deserves to be as popular as whatever’s new on HBO.

Um, no. Am I missing something great out there? I’ve tried a few book podcasts, but I haven’t found one I love.

I used to read everything David Ebershoff published at Random House because his taste seemed to be exactly aligned with mine. So many recent books I loved were his—Charles Bock’s Beautiful Children, David Mitchell’s Cloud Atlas, Adam Johnson’s The Orphan Master’s Son. Alas, he left the business! The lists at Riverhead, Graywolf, and Counterpoint are consistently interesting and surprising. Europa Editions and Archipelago do excellent work in translation. But I always try to remember that great books can come from literally anywhere.