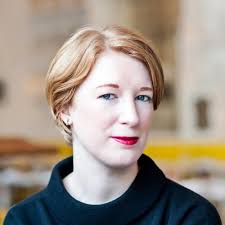 Joanna Scutts is a literary critic, cultural historian, and the author of The Extra Woman, the story of the 1930s lifestyle guru Marjorie Hillis and the lives of single women in midcentury America. Her writing has appeared in The Washington Post, Wall Street Journal, New Republic, The New Yorker, and The Guardian US, among many other venues.

What's one recent piece you’ve written that you're especially fond of and why?

Probably this Slate piece [Well-Behaved Women Make History Too, June 21, 2018], which was the rare occasion when I had a genuine longstanding “what’s up with THAT?” curiosity about a publishing trend than nobody seemed to be talking about, and was able to find the perfect home for it. It pushed me to articulate my dissatisfaction with the way this huge trend (of upbeat stories about “rebel girls from history” for young readers) was distorting the history of women and feminism, and to make a plea against constantly telling children that individual heroism is the only path to a life that matters.

Many of the critics we’ve interviewed for the series so far focus on fiction, so I think it would be interesting for you to describe your process when reviewing a nonfiction book.  How long do you typically spend with the book (from the first reading until you hand in your first draft)? Do you do any additional research?

Well, “first reading” implies I read more than once, which I very rarely have time to do. I’ll mark pages and make notes in the back of the book as I go, and work from there, rereading certain sections if I need to. I generally start reading when the book comes in, and I tend to write and hand in my first draft—um, right around my deadline. I’m a terrible last-minute-panic writer, and I am often late, though in my defense I will say I generally turn in pretty clean and polished drafts.

In what ways do you see book criticism changing? Are there ways you’d like to see it change?

I would like to kill the phrase “straight review” with fire and salt the earth. Books editors are, to my mind, way too committed to the idea that a review is a boring wall of text that no one reads, while essays, Q&As, lists, and all these other formats are supposedly magically more readable. But come on—eighty percent of everything is bad, and most author Q&As are terrible. I would love for editors to identify and nurture good critics, giving them regular assignments, real edits, and a proper and enthusiastic social-media boost, at the very least. Oh, and pay us well enough that we can afford to spend time really thinking about the book.

To take a book’s ideas and its intentions seriously, and treat them fairly. I act as a kind of mediator, or moderator, between a book and its potential readers—helping them to understand the kind of reading experience they’ll have. Increasingly I want my criticism to have an identifiable voice and point of view.

I love writing for the Washington Post, and I think their books coverage is a great blend of serious and silly (shout-out to my ex-NBCC colleague, the inimitable Ron Charles, and his video book reviews). The New Republic is also doing brilliant books and culture coverage, and it’s great company to be in. Places I haven’t written for (hi, editors!) but enjoy reading, include Public Books, 4 Columns, The Baffler, The Point and Bright Wall/Dark Room for film. But honestly for me it’s usually about the writer more than the publication, and I discover most things via Twitter—I’ve read memorable pieces recently everywhere from the LARB to the New York Post.

Sure—I’ve been on a film podcast kick recently and listening to Who Shot Ya?, Little Gold Men, the Film Comment podcast, and Mark Kermode at the BBC. I much prefer podcasts that are critical conversations rather than interviews with authors, and I’m a longtime fan of Pop Culture Happy Hour, mostly for Glen Weldon and Lisa Holmes, both of whom I love as writers as well.

New York Review Books has my number to a scary degree—I always pounce on their catalogue and their books when they come in, mostly because I love the break from chasing the new, new, new all the time. That said, Cassava Press, out of London and Nigeria, is putting out some incredible new African and African diaspora voices. I’m also ridiculously proud to be published with Liveright, who I think have an outstanding list.

Is there a book you’ve reviewed (or would have liked to review) that you feel got lost in the chaos of the last two years?

Oh, man. My book came out in November 2017 and I know what an impossible climate it is to publish in. But I think it’s an even stronger argument for finding and following critics whose taste you respect, and at the same time not worrying so much about what’s current. It’s impossible to keep up, and I’m always baffled that people who aren’t journalists will say “I’m so late to this, but…” Who cares how late you find something, or how? I hadn’t even heard of Andrew Sean Greer’s Less when it won the Pulitzer, and it’s given me so much joy. (I not-so-secretly want to start my own journal of wildly outdated criticism, called “Cold Take.”) Culture doesn’t have to be pegged to the news cycle; it should be a relief from it.