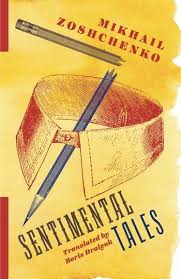 Two critics–Jennifer Croft and NBCC Emerging Critic Paul W. Gleason, selected Mikhail Zoshchenko's “Sentimental Tales” as a suggested work in translation. Here's Jennifer Croft, who is the recipient of Cullman, Fulbright, PEN, MacDowell and NEA grants and fellowships, as well as the inaugural Michael Henry Heim Prize for Translation, the 2018 Found in Translation Award and the 2018 Man Booker International Prize, with a personal essay on the story of her romance with Boris through his translation of “Sentimental Tales.”

Maybe I’m a little biased, but Mikhail Zoshchenko’s Sentimental Tales, translated by Boris Dralyuk and just out from Columbia University Press, are some of the best, funniest and most poignant pieces of writing I have ever read. But then, Boris is my boyfriend, and I did fall in love with him through translation. After reading his glorious Odessa Stories, by Isaac Babel (published by Pushkin Press), not to mention his brilliant anthology of Russian revolutionary prose and verse, 1917 (also published by Pushkin Press), I knew Boris was a person I wanted to talk to at length.

When we started dating a few months later, Boris would walk over to my house—since despite living in Los Angeles we walked everywhere in those days, fate having made us neighbors—and tell me the latest in the life of Apollo Semyonovich Perepenchuk, pianist-for-hire, desperate to impress Tamara Omelchenko, notable local “cream puff,” in the delightful description of Mikhail Zoshchenko, writing sort of from the perspective of his hero, sort of that of his strange critic pseudonym, I.V. Kolenkorov, certainly in the delicate and witty English of Boris Dralyuk.

This story, titled—appropriately enough—“Apollo and Tamara”—is the first in this strange and dazzling collection of fiction first published in a young Soviet Union, from the 20s to the 30s. It offers glimpses of inner and outer turmoil, of a new society desperate to make sense of an old world that’s been shattered and razed. But as I first heard the events in the life of Apollo and Tamara on the front steps of my apartment in the Fairfax District, the scent of angel’s trumpets wafting over us as Apollo proudly performed his composition “The Dreams That Engulf Me” (“That waltz sealed the deal. Seized with the trembling of first love, she shook his hand and pressed it to her lips.”), I was so gripped by the tragicomedy of their lives that I didn’t even think about a context.

Instead, every day when I saw Boris at a few minutes after 5 pm—he would come over the minute he was done with work—I just wanted to know what happened next, needed the plot of the installment Boris had translated that day, needed to know whether Apollo would make a name for himself that would be worthy of Tamara, needed to know whether he would win her back after not attaining the glory she’d required of him, held out hope that somehow the position into which he finally fell of “freelance gravedigger” would bring him closer to Tamara at last.

When my father got sick, Boris and I flew to Iowa City to visit him in the hospital, and on the plane, I read the rest of the manuscript, lingering over the collection’s sublime second story, “People,” laughing aloud despite the reason for our trip. “A Merry Adventure” sustained me over Colorado; between Kansas and Nebraska it was “Lilacs in Bloom.” I have never run across a translator more committed to his authors, never read translations more precise or more beautiful than these.

But maybe I’m a little biased.

And here's Paul W. Gleason, who is an instructor in the religion department at California Lutheran University and a recent recipient of the NBCC’s “emerging critic” award.

Have I told you how much I love Mikhail Zoshchenko? His stories are so funny! He writes in a Russian style called skaz. Have you heard of it before? It’s from the Russian word for “to tell” and usually features a chatty narrator who for some reason thinks he deserves your attention even though he doesn’t have anything important to say and besides isn’t nearly as smart as he thinks he is.

Not like me, colleagues, because I’m a reviewer and always have something important to say. Like now I’m here to tell you about a new translation of Zoshchenko’s early stories, Sentimental Tales.

These are a lot longer than his later and more famous vignettes but they’re still very funny. They’re all narrated by a man named I.V. Kolenkorov, who starts each story with a preamble like “I can just hear them laughing at us three hundred years from now! What strange lives, they’ll say, these trifling folks lived. Running around with something called money, passports—registering so-called acts of social status, measuring out living space in square meters.” Then he tells stories about aristocrats who lose their money, young couples and their misadventures, or artists whose dreams of fame and fortune lead them to disaster.

What kinds of misadventures and disasters? I don’t want to give away too much and anyway I’m sure I don’t have to tell you, esteemed colleagues, about the ridiculous and humiliating things people do and endure for the sake of social status, love, and money.

Most of these stories satirize bourgeois life and attitudes, but would you believe that the Bolsheviks didn’t like them? It’s true! Even though Zoshchenko sold millions of books he still got plenty of mean reviews, especially from the official newspapers.

Maybe that was because the Party believed that once it had reformed society, human character would improve, too. Greed and jealously and vanity would all be unnecessary in the workers’ paradise. So they would just disappear! But “will it really be that wondrous, this future life?” asks Kolenkorov. No, “For the sake of his own peace of mind, the author chooses to believe that this future life will be just as full of nonsense and rubbish as the one we’re living.”

Being funny didn’t save him. In 1946 a Party Resolution condemned Zoshchenko by name, and he was kicked out of the writers union. He was depressed for years and died of a stroke in 1958. These stories made me think about the ongoing relevance but also the limits of political satire, a topic I have lots of thoughts about.

Where are you going? Are you going out to buy stories by Zoshchenko? You’ll love them! You’ll thank me! You will!