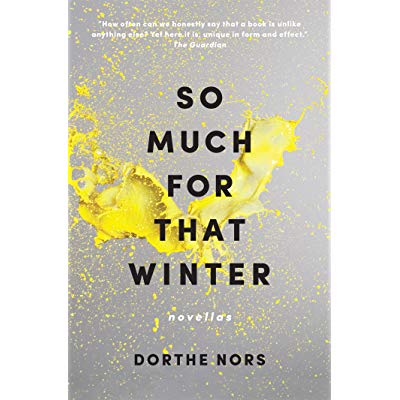 Fortunately for readers of English, the delicacy and elegance of Misha Hoekstra’s translation of Dorthe Nors’ book of novellas, So Much for That Winter (Graywolf Press, 2016) obviates all gaps among languages by staying true to Nors’ rendering of discourse into ideogram, the smallest words made at once more and less important than they appear on their surface. Think of sounds in Sound Poetry, the shared lines, the intersecting spaces, they occupy. Nors relies on the non-semantic effects of words and sentences as much as on their lucid definitions, and her characters' emotive, poignant utterances, spoken and otherwise, depend on that. Without indulging a concrete, visual description of their world, Nors composes, in list form, a typography of observations and remarks along which readers of her novella might follow its heroine, Minna, as if by tracks on snow, syllable by syllable along a discretely embroidered narrative. Typography ideally acts as a transparency by which the world of a story might be entered and engaged, and Hoekstra’s translation, by avoiding embellishment, interpretation, explanation, and deduction, honors Nors’ celebration of this rule. It doesn’t feel like a rule at all, that is, it feels like style, and the result is a charming almost-love story and a deceptively simple portrait of the ever-resourceful Minna, whose perturbations on, say, gender –

Women are tough to swallow.

Women want to look good on the podium.

Women are in the running, but

Minna once won a prize for some chamber music.

Minna would rather have gotten a licence to live –

vex, enlighten, move and entertain us.

Abby Frucht’s six novels include Licorice (Graywolf), Polly’s Ghost (Scribner), and A Well-Made Bed (Red Hen Press). Fruit of the Month won the Iowa Short Fiction Prize, and she has since published a second collection with Narrative Library. Her reviews and literary essays appeared in The Village Voice, The New York Times, the Philadelphia Inquirer and other papers nationwide. Recently she had the pleasure of serving as one of a three judge panel, along with Molly McCloskey and Sergio Troncoso, for the Pen Faulkner Award for Fiction.