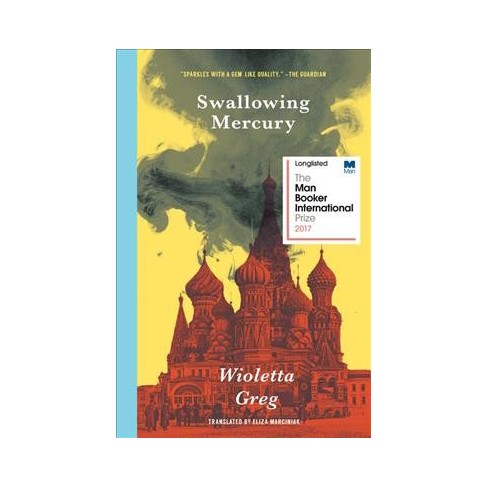 The original Polish title of Swallowing Mercury, translator Eliza Marciniak admits in an afterword, is Guguly: unripe fruit. I think it’s a more apt title. The narrator, Wiolka, is unripe: a young girl. Hers isn’t a “coming of age” story, though, driven by a dramatic series of events — “that was the summer…” Wiolka gives us a jumble of memories ranging from childhood to late adolescence, some crushingly sad, some deliriously joyful, all unmellowed, unripened. Episodic and poetic, the book reminded me of another favorite of mine, Patti Smith’s Woolgathering, though Smith’s narrator-self is more introverted and has a bit more distance from her recollections.

Wiolka’s memories unfold in a web of interdependence, the center of which is her family, surrounded by her village. Like the rest of Poland, the village is being wrenched from Soviet influence by the Solidarity Movement, while centuries-old folkways still hold sway over the people.

Wiolka is wryly observant, exquisitely sensitive, visionary (when delirious with fever), young enough to be vulnerable to the insults and dangers specially inflicted on children, savvy and loved enough to defend herself —and for all that, nonchalant, stoic, and a bit of a swashbuckler.

Unripe. But I don’t blame the translator for the English-language title; the publisher might have found Swallowing Mercury more enticing. And there is an alchemical feel to the work.

Not that it’s got magic in it. Magical realism, then? No, not really. Actually, it makes magical realism look a little…fussy. The prose illuminates without transforming anything from what it is. Take this yardful of junk:

It was nearly noon. Drowsy flies were circling above a steaming pile of dung. Water from the roof was running down drainpipes in streams, battering the young jonquil buds. Snow-white doves strolled about the yard, which looked like a dirty wet rag. Bright patches of inundated fields showed through the gaps in the fence, where boards were missing after my grandfather had chopped them up in February, when the coal had run out. Next to the fence, a small stove with a cracked pipe and flaking patches of patina was dying a slow death. The bones of a rusty harrow protruded from under a tarpaulin among young nettles.

Despite the childhood point of view, Greg never lays on us the cliche of how fantastically perceptive and open children are compared to boring old grownups. Wiolka’s elders are anything but boring. Tight-knit as they are, her kinfolks each pursue their own lives, their own cultures of mother, father, daughter, uncle, aunt, grandmother, grandfather, worker, friend, student, taxidermist.…

However old the people are in Wiolka’s world, none are ripe, none are finished. A storm may yet rip them green from the bough, or worms might gnaw them rotten, or they may manage to hang onto the branch until the sun and the rain have worked their ripening.

Jean Huets is author of the forthcoming book With Walt Whitman: Himself, acclaimed as "a true Whitmanian feast” by Whitman scholar Ed Folsom. Her writing has appeared in The New York Times, The Millions, and Civil War Monitor. She co-founded Circling Rivers, an independent press dedicated to literary nonfiction and poetry. Visit her at http://www.jeanhuets.com