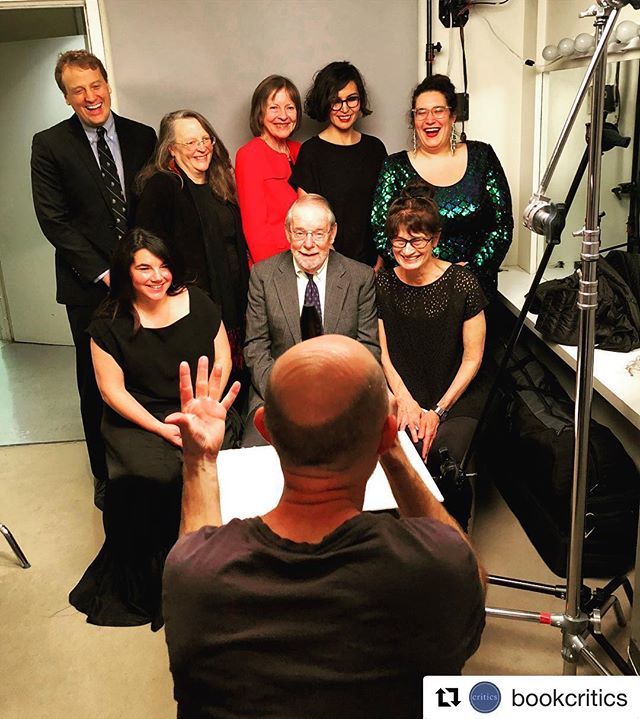 Tonight, at the New School in New York, the National Book Critics Circle announced the recipients of its book awards for publishing year 2017. The winners include Joan Silber’s Improvement (Counterpoint), a dazzlingly inventive and deeply compassionate novel whose multiple storylines reveal shared human moments of love, loss, fate, guilt, and redemption, and Frances FitzGerald for The Evangelicals: The Struggle to Shape America (Simon & Schuster), a masterfully broad and deep chronicle of the cultural, historical, and political influence of one religious strain of American thought.

Layli Long Soldier was awarded the poetry prize for Whereas (Graywolf), a brilliantly innovative text that examines history, landscapes, and identities, in particular the often silenced voices of Native American women. The criticism award was presented to Carina Chocano for You Play The Girl: On Playboy Bunnies, Stepford Wives, Trainwrecks, & Other Mixed Messages (HMH/Mariner), a collection of essays in which Chocano challenges and interrogates the gender roles found in media and pop culture.

Xiaolu Guo's Nine Continents: A Memoir In and Out of China (Grove) was given the prize in autobiography; the book is a sweeping and brutal coming of age story of the author's growing awareness of the world beyond her impoverished Chinese childhood. The biography prize went to Caroline Fraser for Prairie Fires: The American Dreams of Laura Ingalls Wilder (Metropolitan Books), about the author of the Little House series, in which Fraser mined letters, diaries, and other papers to both explain and widen our understanding of the iconic author of some of our most beloved children's books.

Carmen Maria Machado’s fiction collection Her Body and Other Parties (Graywolf) was the recipient of the John Leonard Prize, recognizing an outstanding first book in any genre. She holds an MFA from the Iowa Writers’ Workshop and has been awarded fellowships and residencies from the Michener-Copernicus Foundation, the Elizabeth George Foundation, the CINTAS Foundation, the Speculative Literature Foundation, the Clarion Science Fiction & Fantasy Writers’ Workshop, the University of Iowa, Yaddo, Hedgebrook, and the Millay Colony for the Arts. She is the Writer in Residence at the University of Pennsylvania and lives in Philadelphia with her wife.

The recipient of the 2017 Nona Balakian Citation for Excellence in Reviewing, given to an NBCC member for exceptional critical work, was Charles Finch. Charles Finch is the author of the Charles Lenox mysteries, including The Inheritance and A Beautiful Blue Death, which was nominated for an Agatha Award and was named one of Library Journal’s Best Books of 2007. He is a graduate of Yale and Oxford, and lives in Chicago. His first contemporary novel, The Last Enchantments, is also available from St. Martin's Press. His reviews and essays have appeared in the New York Times, Chicago Tribune, and elsewhere.  The Balakian Citation carries with it a $1,000 cash prize, endowed by longtime NBCC board member Gregg Barrios.

The recipient of the Ivan Sandrof Lifetime Achievement Award was John McPhee.  Born in 1931 in Princeton, New Jersey, John McPhee is a journalist, essayist, author, and longtime journalism professor at Princeton University. He is the author of more than 30 books, beginning with “A Sense of Where You Are,” published in 1965; his most recent book is “Draft No. 4: On the Writing Process.” His lifetime contribution to letters and book culture include his pioneering work in the fields of journalism and creative nonfiction; his explorations of widely varying topics, including science, sports, and the environment; and his mentorship of countless young writers and journalists. He has previously been honored with the Award in Literature from the American Academy of Arts and Letters, the Wallace Stegner Award, and the Pulitzer Prize.

Founded in 1974, the National Book Critics Circle Awards are given annually to honor outstanding writing and to foster a national conversation about reading, criticism, and literature. The awards are open to any book published in the United States in English (including translations). The National Book Critics Circle comprises more than 700 critics and editors from leading newspapers, magazines and online publications.

Xiaolu Guo, Nine Continents: A Memoir In and Out of China (Grove)

Carmen Maria Machado, Her Body and Other Parties (Graywolf)

The Nona Balakian Citation for Excellence in Reviewing

Layli Long Soldier holds a B.F.A. from the Institute of American Indian Arts and an M.F.A. from Bard College. She has served as a contributing editor of Drunken Boat. Her poems have appeared in The American Poet, The American Reader, The Kenyon Review Online, and other publications. She is the recipient of the 2015 NACF National Artist Fellowship, a 2015 Lannan Literary Fellowship, and a 2016 Whiting Award. She lives in Santa Fe, New Mexico.

Carina Chocano is a contributing writer to The New York Times Magazine. Her work has appeared in New York magazine, Elle, Vogue, Rolling Stone, Wired, The California Sunday Magazine, Bust, The Washington Post, Vulture, The Cut, GOOD magazine, Texas Monthly, The New Yorker, The New Republic, and many others. She has been a film and TV critic at The Los Angeles Times, Entertainment Weekly, and Salon.com. She lives in Los Angeles.

Xiaolu Guo is the author of Village of Stone, A Concise Chinese-English Dictionary for Lovers, Twenty Fragments of a Ravenous Youth, and I Am China. She has been named one of Granta's Best of Young British Novelists. Guo has also directed several award-winning films including She, A Chinese and a documentary about London, Late at Night. She lives in London and Berlin.

Caroline Fraser was born in Seattle and holds a Ph.D. from Harvard University in English and American literature. Formerly on the editorial staff of The New Yorker, she is the author of two previous nonfiction books, God's Perfect Child: Living and Dying in the Christian Science Church and Rewilding the World: Dispatches from the Conservation Revolution, both published by Henry Holt's Metropolitan Books. She has written for The New Yorker, The New York Review of Books, The Atlantic Monthly, Outside Magazine, and The London Review of Books, among other publications. She has received a PEN Award for Best Young Writer and was a past recipient of the Margery Davis Boyden Wilderness Writer's Residency, awarded by PEN Northwest. She lives in Santa Fe, New Mexico, with her husband, Hal Espen.

Frances FitzGerald is the recipient of the Pulitzer Prize, the National Book Award, the Bancroft Prize, and a prize from the National Academy of Arts and Sciences. She is the author of The Evangelicals: The Struggle to Shape America; Fire in the Lake: the Vietnamese and the Americans in Vietnam; America Revised: History School Books in the Twentieth Century; Cities on a Hill: A Journey through Contemporary American Cultures; Way Out in the Blue: Reagan, Star Wars and the End of the Cold War; and Vietnam: Spirits of the Earth. She has written for The New Yorker, The Atlantic, Harper’s, The New York Review of Books, The Nation, Rolling Stone, and Esquire.

Joan Silber is the author of the story collection Fools, which was long-listed for the National Book Award and nominated for the PEN/Faulker Award. Her first novel, Household Words, won the PEN/Hemingway Award. She has published five other books of fiction, including Ideas of Heaven: A Ring of Stories, a finalist for the National Book Award and the Story Prize, and The Size of the World, a finalist for the Los Angeles Times Prize in Fiction and one of the Seattle Times' 10 Best Books of Fiction. She's been the recipient of a Guggenheim Fellowship and grants from the National Endowment for the Arts and the New York Foundation for the Arts, and her work has appeared in the Paris Review, the New Yorker, Agni, Ploughshares, Boulevard, and Epoch, among other publications. The beginning of Improvement was published in Tin House, nominated for an O. Henry Prize, and included in The Best American Short Stories 2015. Silber teaches writing at Sarah Lawrence College.

ABOUT THE NATIONAL BOOK CRITICS CIRCLE

The National Book Critics Circle, a tax-exempt 501(c)(3) organization, was founded in 1974 at New York’s legendary Algonquin Hotel by a group of the most influential critics of the day, and awarded its first set of honors the following year. Comprising nearly 600 working critics and book-review editors throughout the country, the NBCC annually bestows its awards in six categories, honoring the best books published in the past year in the United States. It is considered one of the most prestigious awards in the publishing industry. The finalists for the NBCC awards are nominated, evaluated, and selected by the 24-member board of directors, which consists of critics and editors from some of the country’s leading print and online publications, as well as critics whose works appear in these publications. For more information about the history and activities of the National Book Critics Circle and to learn how to become a supporter, visit www.bookcritics.org.