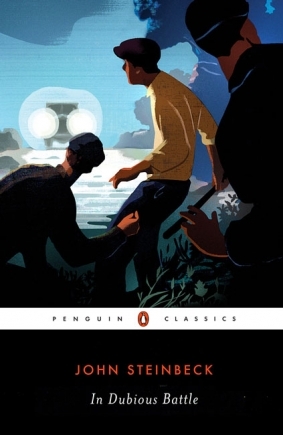 I first read Steinbeck’s In Dubious Battle,  published in 1936, in high school, and it has stayed with me. An account of a strike by migrant apple workers in fictional “Torgas County,” standing in for a real-life labor dispute in Tulare County, it captures the disillusioned mood of Depression-era America. The infatuation with the Communist Party as a tool to mobilize those left out is portrayed here clinically, and, Steinbeck’s protestations to the contrary, sympathetically. Strike leader Mac McLeod and his young disciple, Jim Nolan, are clear-eyed about the consequences of their actions, but argue that the ends justify the means.

“Listen…we’re probably going to lose this strike,’’ Mac tells a local picker he’s recruited to the cause. “But we maybe raised enough hell so maybe there won’t be a strike in the cotton… It doesn’t make any difference if we lose. Here’s nearly a thousand men who’ve learned how to strike…”

It’s a quietly furious novel, less magniloquent than The Grapes of Wrath,’ but more effective, for my money. Steinbeck’s loner stance puts him at a distance from the agit-prop work of the day, from Dos Passos to broadly drawn Popular Front fiction.

A sympathetic medic, Doc Burton, supplies counterpoint to the revolutionary mood, arguing that “violence begets violence… It seems to me that man has engaged in a blind and fearful struggle out of a past he can’t remember into a future he can’t foresee nor understand.’’

We may not see the future lying before us, but Steinbeck has provided a valuable roadmap to the lessons of the past. He may have fought kicking and screaming against the label of “engaged’’ writer – he’ll never be confused with Sartre, to his credit – but he understood the power, as well as the perils, of resistance.

Paul Wilner is a frequent contributor to the San Francisco Chronicle, Zyzzyva, and other publications.