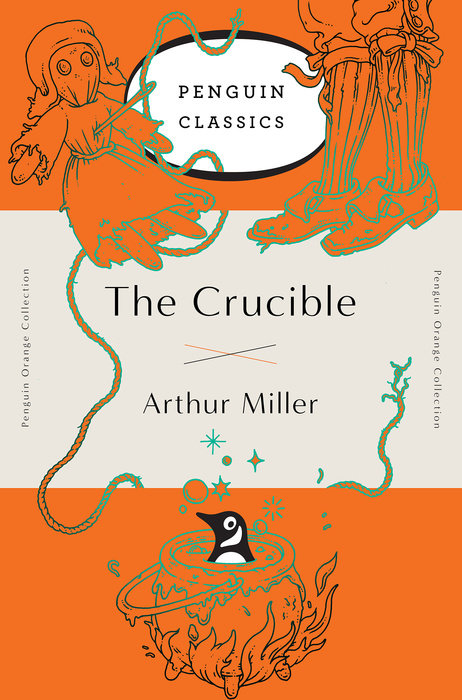 Arthur Miller’s The Crucible is designed to infuriate.

Those who find it a classic tragedy—one that provides a “cleansing” catharsis—are in the minority, I think. And they miss the point. Miller’s Death of a Salesman leaves most audiences wrung out, weeping more or less hopelessly. His Crucible, though, leaves most audiences weeping angrily. It didn’t have to happen, we say—if only those irrational people had listened—if only the rational, sensible people had acted sooner—

Miller wrote The Crucible in the spirit of Ibsen’s Enemy of the People, that earlier play about an ordinary, stubborn man becoming radicalized by the lies and injustice of his community. Like Hollywood’s High Noon, The Crucible is a call to resistance against the Communist Witch Hunts of the early fifties. But it is much more than that.

John Proctor is an individualist in the best sense of the word. He refuses to let other people think for him—and, at the end, he refuses to be used by his community for evil purposes. We come to understand that small conformities can lead swiftly to malevolent enormities. Proctor loves life, loves the physical world, and he does not believe in an afterlife.

The Crucible offers a number of role models for resistance. Proctor’s wife, Elizabeth, is strong and strong-minded. Elderly Rebecca Nurse, kind, patient, and warm-hearted, goes to the gallows a confident, untroubled Christian, ready to meet her Maker.

But John Proctor is this play’s flawed, all-too-human protagonist. Like Robert Bolt’s Thomas More in A Man for All Seasons, Proctor does everything he can to avoid execution. Still, at the end, he is willing to die rather than be publicly humiliated. After months of self-disgust at his weaknesses, Proctor goes to the gallows at last proud of himself, consciously setting an example of courageous resistance for his sons.

And when he leaves the stage, I am filled with admiration at this genuine heroism, this fiercely reluctant martyrdom. I weep at senseless loss, and I feel rage that Puritan pygmies can cause such suffering. And can even cause the death of a man as strong, honest, and clear-sighted as John Proctor. Like Robert Bolt’s Thomas More, Proctor dies rather than sell his soul.

The Crucible inspires vigilance, blunt honesty, and moral exertion. The anger it engenders is our fuel for action.

Ron Smith was Poet Laureate of Virginia from 2014 to 2016. He has published three books of poetry with Louisiana State Press (including the forthcoming The Humility of the Brutes) and one with University Presses of Florida. Smith has taught poetry and poetry writing at Virginia Commonwealth University, University of Richmond, and University of Mary Washington, and is Poetry Editor of Aethlon: The Journal of Sport Literature. He is currently Writer-in-Residence at St. Christopher’s School in Richmond, Virginia.