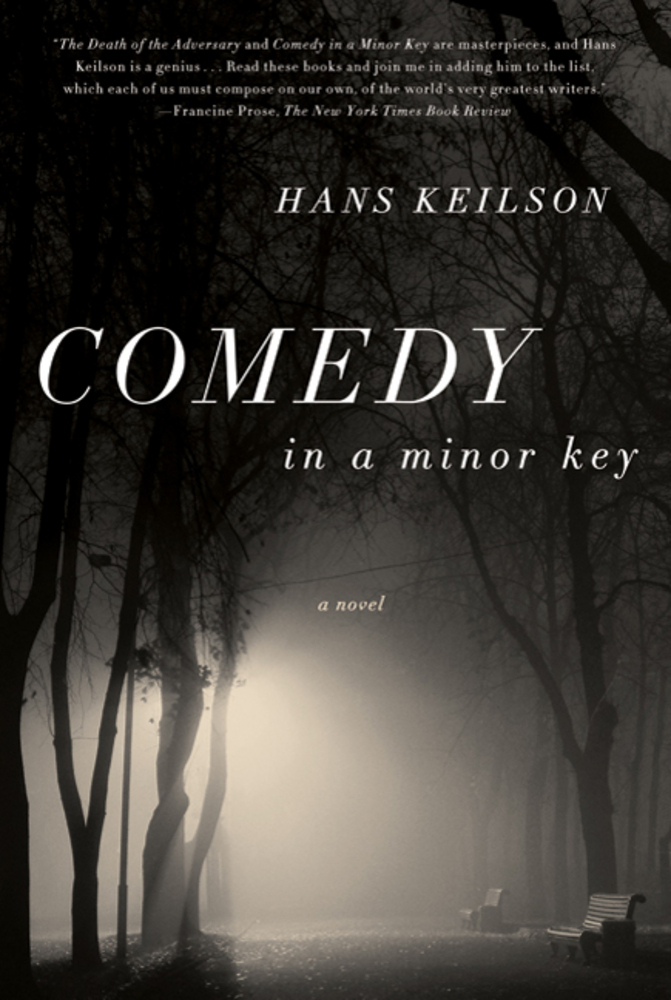 It’s tempting in this time of high anxiety to grasp for narratives that indulge our fantasies of revenge and restoration, that respond to our woundedness and fear by romanticizing rebellion;  insurgency; principled violence.

But for once let’s try something else: a story that depicts resistance through acts of basic human compassion, carried out earnestly, if sometimes clumsily, by ordinary people struggling to maintain decency and dignity in challenging circumstances.  For that I recommend Hans Keilson’s Comedy in a Minor Key (Komödie in Moll, in its original German), which despite its brief length and understated manner offers a nuanced portrait of a young married couple whose kindness to a stranger invites peril and reconfigures their lives in unexpected ways.

Wim and Marie are young, Dutch, seemingly secure in their domesticity.  When they allow Nico, an elderly Jewish perfume salesperson, to hide from the Nazis in their attic, their concerns are as much about the awkward logistics of communal living with a stranger–laundry, smoking, how much soup to cook–as they are with the very real danger of being caught.  They want Nico to be invisible, but it’s also very important that he be comfortable.

The couple’s situation becomes dire when Nico dies, not in a concentration camp, not in a hail of Nazi gunfire, but of pneumonia, in his bed, alone.  How are they to dispose of the body of someone who wasn’t supposed to be there in the first place?  Complications ensue.  If this is a comedy, as the book’s title suggests, this is where a dark slapstick emerges: the awkward struggle to relocate a corpse to an anonymous park bench in the dead of night; the absurd contortions involved with keeping up appearances when life has careened out of control.  The irony ratchets up when the couple must themselves go into hiding after realizing that in their haste they dressed Nico’s recently discovered body in clothes traceable back to them.

The story is structured as a thriller, but an unconventional one, in which everyday actions are fraught with risk and consequence, and familiar domestic settings become geographies of anxiety.  There are bombers overhead, and gunshots in the distance, but the camps are an omnipresent abstraction, unnecessary to describe or discuss.  The prying eyes of neighbors and the ambiguous trustworthiness of the postman are the real and present dangers. Soiled clothes hide in the hamper; coffee cups clatter into the sink.

But Comedy in a Minor Key’s most memorable note may be its portrayal of Wim and Marie not as heroic figures but as ordinary, well-intentioned people who are prone to griping and bickering but nevertheless choose compassion and stick to their choice even when its consequences destabilize everything about their lives, including their marriage.  They can’t easily articulate even to each other why they are risking their lives for a stranger.  Perhaps it’s “the only way we can do anything at all to show that it isn’t all right,” suggests Wim.  It’s not to make money, Marie reminds him, and herself.

But Keilson, who was himself sheltered by a Dutch family during the war, knows their true motivation.  His narrator explains, in one of the book’s most eloquent passages (and one of the few in which it detours from its otherwise spare tone):

Marie understood that words like 'love your neighbor' or 'national duty' or 'civil disobedience' were only a weak reflection of this deepest feeling that Wim and she had felt back then: wanting to shelter a persecuted human being in their house. Like the way people veil a body in fabric and clothing so that the blaze of its nakedness does not blind too deeply the eyes that see it, people veil life itself with precious garments, behind which, as under ashes, the double-tongued fire of creation smolders. Love, beauty, dignity: all that was only put on, so that whoever approached the glowing embers in reverence would not singe his grasping hands and thirsting lips.

Wim and Marie’s actions arise from altruism of the most primal, pre-verbal sort: the simple impulse to protect a fellow human being from harm, for no reason other than shared humanity.  As a contemporary model for resistance, we could do worse.

Brendan Driscoll's work has appeared in Booklist, The Millions, and other periodicals.  He is writing a novel about food, love and deportation.  Originally from western New York State, he now lives in Colorado.