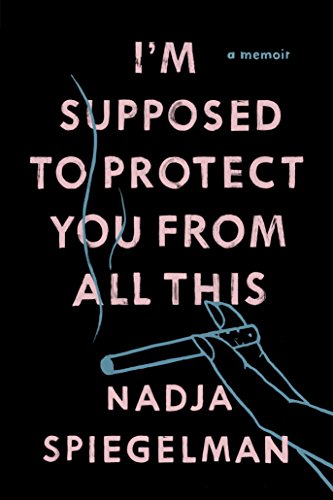 In November, National Book Critics Circle members will begin nominating and voting for the fourth John Leonard award for first book in any genre. In the run-up to the first round of voting, we'll be posting a series of #NBCCLeonard blog essays on promising first books. The twelfth in our series is NBCC member Susan Comninos on Nadja Spiegelman's I'm Supposed to Protect You from All This (Text Publishing).

In 2009, Nadja Spiegelman, then a 22-year-old intern for the Jewish Forward, interviewed me because the newspaper was publishing my poem “pecan, rodef, clam,” a look at a fetus posing a threat to its mother’s life, which Jewish law says can be aborted till the point of crowning. The poem explores the struggle over whose existential narrative — mother or child’s — will take precedence.

What I didn’t know then was that Spiegelman — the daughter of Art Spiegelman, whose Pulitzer-winning graphic novel, “Maus,” shows his parents’ survival of Auschwitz-Birkenau — had begun exploring a theme of unwilling parenthood on the maternal side of her family. During her off-hours, she was laying the groundwork for her notable debut memoir, “I’m Supposed to Protect You from All This,” the result of her interviews with her mother, Francoise Mouly, the art editor of The New Yorker, about the latter’s painful upbringing in France, as well as the pair’s fraught mother-daughter relationship.

Born to a cosmetic surgeon and his beautiful wife, Mouly experienced her own parents, who ultimately divorced, as narcissists, who valued their egos and extramarital affairs over their children. (Her mother even began a fling with the father of Mouly’s first fiancé, collapsing her daughter’s engagement). To escape her parents’ orbit, Mouly fled from Paris alone, and at 18 years old, to New York City, where she met her husband. After their first child, Nadja, was born, “I realized that I could reinvent motherhood,” Mouly later said. As with the family’s Soho loft, which she’d single-handedly refurbished, she initially papered over the past so well that her little girl thought that her maman was magic.

“When I was a child, I knew my mother was a fairy,” Spiegelman writes, and her admiration — for the mignon Mouly’s creative mightiness — never flags. “On weekends, she put on safety googles, grabbed a jig saw, and remade the cabinets in her bedroom. She ran a hose from her bathroom to the roof to fill my inflatable pool. She helped me build a diorama of the rain forest, carving perfect cardboard birds of paradise with her X-Acto blade.”

But their relationship changed. As Spiegelman approached adolescence, Mouly grew increasingly angry, and her daughter felt the target of her rage. Triggers included Nadja’s changing body (where Mouly was oxymoronically thin — “She never ate, then she ate like a wolf” — Spiegelman was overweight). Further, the girl’s sense of reality was straying from her mother’s own. Accusations followed: Nadja had thrown away all the spoons, eaten treats meant only for her brother, moved her mother’s papers. (“‘Stop lying,’ I was told. And yet I was incapable of apologizing for things I had not done.”) The petty nature of the complaints aside, Mouily’s wrath — her daughter suggests — could explode into violence, followed by a disturbing maternal amnesia.

“‘You’re exaggerating, Nadja,’ she would say, a week later. ‘How could I have kicked you up the stairs?’” Confused, Spiegelman would turn to her diary, inscribing the events with a coded “R,” to verify for herself that the raging — even physical — brawls were real.

To better understand her mother, Spiegelman, in her 20’s, began exploring the dynamics that had driven Mouly from France — even relocating to Paris to hear her grandmother’s side of the stories. There, she made an unexpected discovery: her maternal line had been marked by girls born out-of-wedlock. A resulting shame had trickled down from one generation to the next, staining a series of mothers’ stances toward their daughters.

As for Spiegelman’s own model: readers familiar with her father's “Maus” will see the parallel between her memoir and his comic-strip masterpiece. Art Spiegelman began their tradition of interviewing family members — in his case, his father, Vladek, who outlasted the Nazis — but about much higher stakes.

Still, it wouldn’t be fair to say that his daughter considers their two projects to be morally equivalent. She doesn’t — and it’s while hunting down her maternal history that she uncovers a grotesque irony in the family tree. Where her Jewish grandparents were victims of the Nazis, some of her French forbears engaged more-or-less intimately with Fascists.

For better or worse, family history repeats itself, and Spiegelman’s first-hand discovery of this fact gives meaning to her struggles with Mouly. “[N]ow that I knew her past,” she writes, “I saw all the ways in which she worked to be a very different mother from her own. And I also saw how much the past, so long kept secret, pulled us into formations like a deep ocean current, from so far below that we barely knew we were not moving on our own.”

At times, her memoir strays from its focus, with a segment about 9/11 feeling inserted to give the story more gravitas. But the book doesn’t need it. Like her father’s “Maus,” Spiegelman’s “I’m Supposed to Protect You From All This” goes far beyond its roots as a post-trauma memoir. Marked by curiosity and a gift for storytelling, her work fulfills a literary ambition all its own.

Susan Comninos is both an arts journalist and a poet. She’s covered books for The Atlantic Online, The Boston Globe, Chicago Tribune, Christian Science Monitor and Haaretz English Edition, among others. Most recently, her poetry’s appeared in Subtropics, Rattle, Spoon River Poetry Review, The Journal of Compressed Creative Arts and The Tishman Review. She recently completed a debut book of poems, “Out of Nowhere.”