This is the twenty-first in Critical Mass's new Second Thoughts series, curated by Daniel Akst. The series ends next week. Thanks to all who contributed. 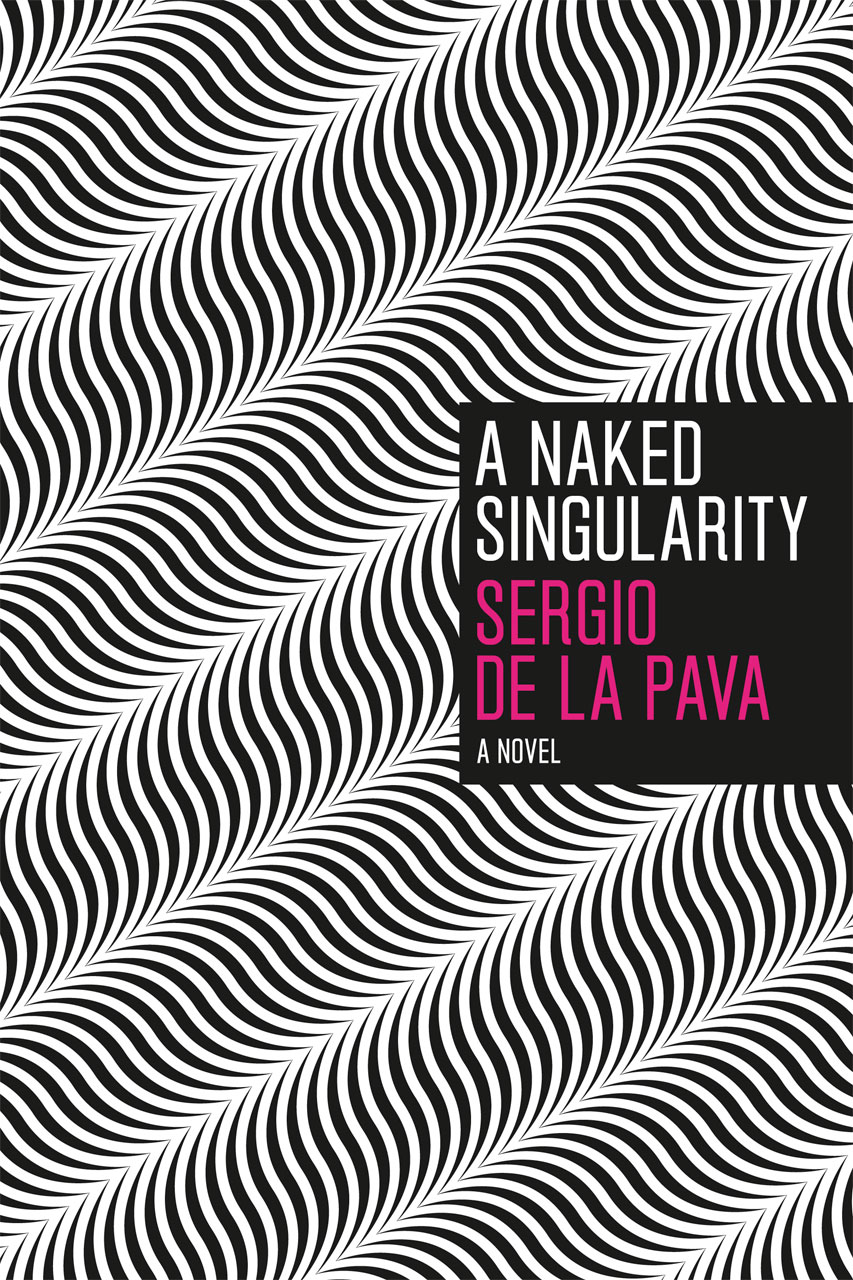 Up way too late with a review copy of Sergio de la Pava's 2008 novel A Naked Singularity, with a deadline fast approaching, I was stuck.

I knew I should say good things about the novel. I wanted to say good things about the novel. It deserved the saying of good things. But there was something holding me back. Every time I typed a sentence praising some aspect of the book—its courage in taking on a big social theme (the failure of the criminal justice system); its linguistic playfulness; its well-calibrated gallows humor; its moments of crushing sadness—something made me doubt what I’d written. Something irked me about A Naked Singularity, really irritated me on a visceral level that went past casual annoyance.

Yet it was for some reason impossible for me to identify what it was, or to ignore my annoyance and say the good things that the novel deserved so I could file the review and go to bed. In a few hours, morning would arrive, and with it my deadline, and then it would be time to go to work at my day job. Like Casi, the novel’s protagonist, and like de la Pava himself, I’m a lawyer.

It wasn't the novel's sprawl that irritated me, though some reviewers have complained about that. A Naked Singularity is just shy of 700 pages, twice as long as most novels published these days but not an unreasonable length, either by commercial standards (how many copies of Roberto Bolaño's 900-plus-page 2666 were being carried around on the subway a few years back?) or by formal ones. De la Pava works in the “hysterical realism” literary genre, after all, with its glorious run-on sentences, long footnotes and rambling digressions. Besides, I usually dig long books. I like the patience they require; the commitment they demand; their heft in a shoulder bag, bumping against your hip on a walk. I especially like that long books often let the ideas that they wrestle with, and the feelings they explore, emerge nuanced and unrushed. I like that they are the opposite of clickbait.

Nor was it the structure of the novel. Others have complained about this too. Sure, it’s a bit of a hodge-podge, jumbling together gritty day-in-the-life-of-a-public-defender scenes with true-sports commentary on middleweight underdog Wilfred Benitez with sad epistolary narratives from death row with action-movie fight sequences with dorm-room pop culture analysis slash Zen of Physics hyperbabble, among other things. Listed that way, the mélange sounds awkward and show-boaty, but it’s par for the course in the genre, and in practice it wasn’t offensive enough to overshadow the legitimately funny moments, or the heartbreaking ones. And that alone shouldn’t have been enough to irritate me as much as A Naked Singularity was irritating me. Maybe I would have figured it out if I had slept on it, or been less sleep-deprived in the first place, but it was late, and I was on a deadline, and I was staring down a full day of conference calls and redlines and other assorted corporate law detritus and if I didn’t write the review that night, it wasn’t getting written at all.

And so here’s what I did. I described the book as a crime novel of sorts, which it is, although it’s obviously a lot more than that. I said that it was “one of those sprawling hyperverbal stream-of-consciousness epics that sometimes seem infatuated with their own cleverness but in their best moments manage to capture something profound about our sprawling hyperverbal stream-of-consciousness world,” a statement that says more about my thoughts on the genre than it does about the novel. I noted the mélange of different styles, and suggested that the story contained both hilarity and heartbreak, and “an insider’s knowledge of the Manhattan criminal-court system.” I alluded to the influence of David Foster Wallace upon de la Pava, but this again is a statement that could be made about almost any contemporary work within this genre. And I hinted at the buzz surrounding de la Pava’s path to literary accomplishment through the wilderness of self-publishing. All true things.

In other words, I played it safe. Safe, in the sense that I stuck to the facts. I kept my commentary hedged and reasonable. I did not mention that there was also something viscerally bothersome about the novel, a reaction readers might be interested in hearing about, but only if I could tell them why I was having that reaction, which I couldn’t. Looking at the review with today’s eyes, I don’t disagree with what I wrote. It still stands as a fair assessment of the book. But it’s now clear to me that I did A Naked Singularity a disservice in not even attempting to articulate my true response to the novel, however raw or complicated it may have been. Instead of saying the good things that I knew the book deserved, or opening fire with the complaints that it may well also deserve, I chose the path of faint praise. Lame.

Here’s what I would have said, had I the awareness and the courage:

A Naked Singularity is a great and irritating book because it is smart and beautiful and yet so frustratingly needy that you want to throw it across the room. It wrings dark humor and even darker pathos out of the New York City criminal-court underworld, and its prose flashes electric across many pages. It obviously comes from a place of real emotion–loss, frustration, anger–which is a great virtue that many books in this cartoonish genre lack. When Casi struggles under the weight of his perfectionistic-existential anxiety and his inability to change much of anything, the feelings feel real. All good things, things that deserve to be said about the novel. And yet A Naked Singularity suffers from its own existential anxiety–about its value, its profundity, its worthiness as a novel, and that is what is so irritating.

We see this in de la Pava’s stylistic and structural choices, which often ape Infinite Jest so hard that it’s embarrassing; we see this in the forced profundity of some of those dorm-banter scenes, like those in which people wax on about The Honeymooners and quantum physics. And we see this in the third act of sorts, where Casi ends up in a crime caper that achieves some sort of a climax as a technical structural matter but emotionally doesn’t really feel like one. It’s as if the author, having written 600 pages or so, including some gorgeous moments but little discernable plot, decided that he’d better build in some sort of action-filled ending or else the novel wouldn’t end, or wouldn’t be considered a novel, or something like that.

Behind each of these choices, and more, we see a nervous author who, like Casi, knows he has talent but worries that it may not be enough for the situation at hand. Which is unfortunate, because the reality is that de la Pava does have the chops, and he doesn’t have to ape David Foster Wallace to stir his readers’ emotions and justify the time they’ve invested in reading a book this long. It’s a great book, with a lot to say, but it would be even better if it could stop worrying about whether it is a great book or not.

But here’s the kicker. The reason I can now identify and articulate this frustration, and why I’m in a mood to be reflective about A Naked Singularity, is because I’ve recently found myself wrestling with similar anxieties. Besides book reviews, I write fiction, and for the past two years I’ve been working on a novel that deals with, among other things, the sad harsh brokenness of our legal system. My Casi is a guy named Steven, a lawyer dog-paddling his way through a life of corporate law until his friend gets deported and Steven encounters his own helplessness. Like de la Pava, I’m influenced by the great hysterical-realist macro-novels of the late 20th century, and have found myself experimenting with absurd language, fragmented narratives, sweeping themes and high page counts.

In other words, the stuff that annoyed me about A Naked Singularity is stuff I’m trying to avoid now, and let me tell you, it’s hard. Super-hard. So among other things, de la Pava deserves credit for having at least pushed through his anxiety and gotten the novel off the ground, even if its brilliant moments share space with a pervasive and itchy self-doubt.

The novel still irritates me. But so does my novel-in-progress, about which I have the same itchy self-doubt. And so whereas A Naked Singularity was once a book that I sort of liked but also sort of annoyed me, it’s now a book that I appreciate as an inspiration of sorts, a model of perseverance in the face of anxiety.

Brendan Driscoll is a freelance reviewer, mostly for Booklist, as well as a writer of fiction. He lives in New York’s Hudson Valley.