In the days leading up to the March 12 announcement of the 2014 NBCC award winners, Critical Mass highlights the thirty finalists. Today, NBCC board member Gregg Barrios offers an appreciation of biography finalist Miriam Pawel's “The Crusades of Cesar Chavez” (Bloomsbury). 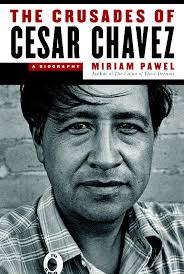 “To be a man is to suffer for others. God help us to be men!–Cesar Chavez

Recently when a film bio of union organizer and activist Cesar Chavez premiered at SXSW in Austin, the film’s director Diego Luna taped a segment on the city street named after Chavez.  He asked individuals if they knew who Cesar Chavez was. Much to his disappointment, most confused the union organizer with the former boxer Julio César Chávez. A few confused him with the late Hugo Chávez of Venezuela. One person (an African American) correctly identified him as a labor organizer.

And yet, it is almost unimaginable that Chavez is not a household name since he is considered one of the most significant Latino figures in the 20th century, who is on a US postage stamp, and whose birthdate is celebrated as a state holiday in California, Colorado and Texas, and whose clarion call of “Si se puede” (Yes, we can) was President Obama’s campaign slogan.

Are the heroes and icons of the Civil Rights movement of the 1960s and the Mexican American civil rights movimiento in the 1970s of such a bygone era that today’s millennials consider them ancient history? Do high school history classes cover labor and social justice movements and the unsung heroes who fought for real changes to unjust laws and poor living and working conditions?

In the not so distant past, the United Farmworkers (UFW) with the red and black eagle logo was responsible for successful grapes boycott in this country. It captivated the hearts and minds of eager college students many of whom went on to volunteer to work for these causes. These boycotts led to contracts with table grape growers and producers. Chavez was considered the hero of this David vs. Goliath battle. There were three major biographies on Chavez written while he was alive including ones by prize-winning authors John Gregory Dunne and Peter Matthiessen. And while the books were more laudatory than investigational, few of them were accurate renderings of Chavez, the man.

So it fell on journalist and writer Miriam Pawel whose earlier book, a history of the Farmworkers Union (“A Union of their Dreams”) made her aware of the changes that had taken place since and to take on the daunting task of writing the first major and definitive biography of Chavez in 40 years.

What Pawel has done is dispense with the hagiography surrounding Chavez’s legend and unearthed the story of a man who wanted to dedicate his life as a crusade against injustice. To that end, Pawel wanted to clear the air of the smoke and mirrors and instead view Chavez without the saintly aura. That said, Pawel readily admits that the book was done without the cooperation of the Chavez family who continue to cleave to the official story. Luckily for the author, Chavez left a treasure trove archive of his journey from his early days until his death in 1993. From audiotapes, writings, videos and interviews with most of Chavez’s living mentors and associates, Pawel amassed an astounding wealth of material over 12 years. The result is a 500-page book that is deeply researched and yet reads like an engrossing non-fiction novel of a man who changed his world.

The number of small details and events that occurred behind the glare of the media are quite revealing: Chavez didn’t use the accented spelling of his name – even though most of the streets, schools and centers named after him use the correct Spanish spelling. Chavez dismissed the UWF’s cultural arm, El Teatro Campesino founded by Luis Valdez early on for fear that they would become more visible than the union. And some of his union members used strong-arm tactics on scabs despite the UFW’s stance of nonviolence.

More surprising: Chavez never organized outside of California nor did he participate in the Raza Unida Party, the political arm of the Mexican American civil rights movement. He was against illegal immigration and was a lifelong Democrat. And while he retreated to his commune styled compound, he was also a Vegan who advocated for the idea of organic farming, yoga, and vegetarian diets. More importantly, the UFW after Chavez’s death had few contracts with growers and their health insurance were practically non-existent. For some, Chavez’s death marked the end of an era and yet many of the initial changes and goals were achieved.

The author correctly surmises that his legacy would not be in the fields but in the rise of his people – especially those young people who worked in the organization of the union and have gone on to make inroads in national non-profit organizations and city, state and national government.

In an age when dozens of biographies are written about self-aggrandizing military and political leaders, it is important to have this book on your reading shelf, and especially important at a time when Latinos are the nation’s fastest growing population and the number of Latino elected officials has doubled. We also are faced with a broken immigration policy, and organized labor unions in this country are under siege.

Cesar Chavez gave farmworkers voice to protest for a living wage, for health care, for the banning of pesticides in our food supply and for raising issues about the health concerns to farm workers exposed to those pesticides. Despite his personal failures, the fact remains that many of the strategies he implemented from boycotts to peaceful non-violent marches remain effective tools for organizing and making the citizenry aware of the inequality that still exists in our nation.

After reading Pawel’s inspiring, necessary and moving biography, one can only hope that such life stories inspire and provide a role model for our youth to consider a life serving the less fortunate. For Chavez, that goal fueled his life and gave rise to a moment in our history where we were able to move forward. Si se puede!

One of the 20th century’s other great organizers for social change, Joe Hill said it best in an epitaph that might also echo Chavez’s legacy: “Don’t mourn –organize!”