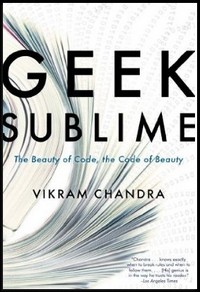 The easy summary of Vikram Chandra’s “Geek Sublime” would be to say that it demonstrates similarities between literature and programming: both are concerned with elegance and symmetry; both follow formal structures, and both aim for beauty. “Code is poetry,” as WordPress tells us every time we post something new.

But is it? Such a thumbnail—shorthanded in the book’s subtitle, “The Beauty of Code, The Code of Beauty”—does not do justice to the subtle and revelatory scope of this book, or Chandra’s ideas about programming or literature. In ten overlapping essays, Chandra also touches on, amongst other subjects, an Indian educational system that privileges Western literature, writing a novel, the dude-infused culture of Silicon Valley, the formative role of women in code, how computers actually work, and Sanskrit grammar.

It is delightfully hard to define, or place into a category. “Geek Sublime” is criticism molded by autobiography, biography, fiction, poetry and non-fiction. It could also be called a quest narrative. Chandra goes on a journey to answer fundamental and theoretical questions—are code and literature ruled by a similar logic? By twin aesthetics? Or both? Can we pinpoint the fundamental rules of either? Or do computers work—as many laypeople and programmers think—as if by some magic (as do many say of poetry?)  Full stops elude.

Never able to find a tight conclusion, Chandra, who grew up in India and moved to the United States to study literature, going on to work as a programmer and write novels, re-asks the questions, which, like code, becomes more complicated as they are iterated. So too do the possible answers. Those we may want to hear—the one we heirs to C.P. Snow, living in a digitally humanist world would be able take in stride—“the best code is poetry!” “fiction is hard wired!” —fail to contain the whole.

Programming  may, like literature, be concerned with “simplicity, elegance, structure, flexibility”—but it is also “uniquely kinetic. It acts and interacts with itself, with the world…Code moves.” And as it moves, it changes not just itself, but the world and biological selves: “Synbio is here, and bio-hackers and programmers will change you and your environment much sooner than you think.”

What match is art to such tangible effects? Enough.  Chandra tells us that literature alters consciousness too, even if poetry is not logic. And Chandra shows us this, too, by writing a lyrical and graceful and elegant book that keeps defying our expectations, outstripping itself,  wonderfully impossible to contain.