In the weeks leading up to the March 12 announcement of the 2014 NBCC award winners, Critical Mass highlights the thirty finalists. Today, NBCC board member Walton Muyumba offers an appreciation of nonfiction finalist David Brion Davis' “The Problem of Slavery” (Knopf). 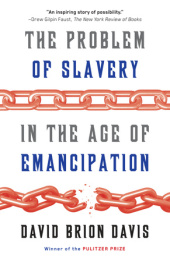 Among the finalists in the nonfiction category, there’s a fascinating exchange about political economies, social revolutions, and the truths of contemporary human experience.  Though the authors’ concentrations range from animal extinction and climate change to the literary artist as pawn in Cold War machinations; from the stagnation and decline of middle class wealth to the tragicomic labor drama and human calamity of miners trapped in the earth, David Brion Davis’s historical narrative of slavery in Western culture overlaps and links all aspects of that conversation. In “The Problem of Slavery in the Age of Emancipation,” Davis suggests that slavery is both the cornerstone of and the fundamental challenge to the basics principles of New World nation-building — labor and production, citizenship and human rights.

Culminating his study with “The Problem of Slavery in the Age of Emancipation,” Davis opens this work with an analysis of Enlightenment thought and the practice of animalizing Africans as justification for enslaving them.  As usual, Davis writes with a comprehensive knowledge of the American historical tradition, citing everyone from C. L. R. James and John Hope Franklin to Drew Faust Gilpin and Walter Johnson.  In forceful, elegant prose, Davis details how Africans, reduced to chattel status, rejected animalization through escape to maroon communities and revolt.  And once free, those former slaves fought alongside free blacks petitioning for the abolition of slavery, enforcing black humanity, and staking claims to freedom, independence, and citizenship from Haiti to Maryland to Brazil.

“In dealing with slavery and its subsequent antiblack racism, there has always been a danger of exaggerating a kind of passive victimhood that elicits white pity as well as contempt for a ‘damaged black psyche.’ The image of blacks as psychologically damaged victims can reinforce the belief in white superiority and has in fact been used to oppose racial integration and civil rights . . . [T]he central pathology is a white pathology intent on animalization as a form of projection for the benefit of whites of all social classes. If this psychological exploitation resulted in some black internalization and even pathology, it also evoked black resistance, from the time of slavery to the thousands of ex-slaves in the South who were routinely arrested for ‘crimes’ like vagabondage and were then leased out by states to work in mines, plantations, and factories, to say nothing of the later blacks who refused to sit in the back of a bus or to step off a sidewalk to make way for white superiority.”

Undermining mythologies of white superiority, black savagery, and passive black victimhood with powerful stories of black nationalist ideologies and black resistance movements, Davis explains that “moral progress seems to be historical, cultural, and institutional, not the result of a genetic improvement in individual human nature.”  “The Problem of Slavery in the Age of Emancipation” asks us to realize that the abolition of chattel slavery in the New World “represents a crucial landmark of moral progress that we should never forget.”  Davis’s excellent study compels us to draw concentric links from Toussaint Louverture and Frederick Douglass to the burgeoning human rights movements awakening in America today.

Drew Gilpin Faust in The New York Review of Books.

Eric Foner in The Nation.

Steven Hahn in The New Republic.

Eric Hershthal in The Daily Beast.