In the weeks leading up to the March 12 announcement of the 2014 NBCC award winners, Critical Mass highlights the thirty finalists. Today, NBCC board member Michael Miller offers an appreciation of nonfiction finalist Peter Finn and Petra Couvée’s “The Zhivago Affair” (Pantheon). 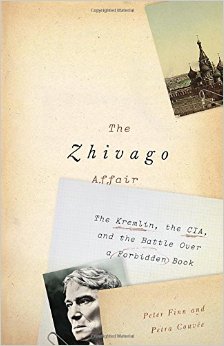 Shortly after its first printing in Italy in 1957, Boris Pasternak’s “Doctor Zhivago” became an international sensation, celebrated by readers and critics alike. In theUnited States, where the novel was number one on the New York Times bestseller list for six months, Edmund Wilson wrote, “Doctor Zhivago will, I believe, come to stand as one of the great events in man’s literary and moral history.” And in 1958, Pasternak won the Nobel Prize in literature. By themselves, these facts lend “Doctor Zhivago”’s success the appearance of inevitability. But as Peter Finn and Petra Couvée’s excellent new study “The Zhivago Affair” reminds us, this enthusiastic reception was only half the story: If Pasternak had not blatantly disregarded Soviet dictates, putting himself and his family in great danger in the process, his novel, at least as he wrote it, might never have made it to a printing press. In fact, as Finn and Couvée make chillingly clear, it’s surprising that Pasternak—who frequently nettled authorities at a time when many writers accused of dissidence were jailed or shot—survived to write the book at all.

A brisk narrative enriched with historical detail, Finn and Couvée’s book presents Pasternak (1890–1960) as an artist who navigated his Soviet milieu with charm and insouciance, a poet who early in his career celebrated Lenin and Stalin in his verse but later grew increasingly ambivalent about the Communist government. An ominous cloud hung over Doctor Zhivago from the very start: “Pasternak began to write Doctor Zhivago on a block of watermarked paper from the desk of a dead man,” Finn and Couvée write. “The paper was a gift from the widow of Titsian Tabidze, the Georgian poet who was arrested, tortured, and executed in 1937.” By 1945, Pasternak had come to see his work-in-progress as his greatest achievement. He organized gatherings at which he read sections of the book. The readings proved to be popular but hazardous: In 1947, the literary journal Novy Mir called them “counter-revolutionary,” and claimed that Pasternak’s unpublished novel was marred by a “reactionary and backward looking ideology.” Authorities believed that the book was critical of the 1917 Revolution—grounds, in many cases, for execution. Pasternak avoided this fate (Finn and Couvée write that he “could not explain his survival”), but some of those close to him were severely punished: In 1949 his mistress, Olga Ivinskaya, was arrested, interrogated about her relationship with the author, and sentenced to five years in a hard-labor camp for “contact with persons suspected of espionage.”

Finn and Couvée’s description of how Pasternak got “Doctor Zhivago” into the hands of a European publisher has the menace and momentum of a political thriller: In 1956, Pasternak gave a manuscript of “Doctor Zhivago,” which clearly was not going to be published in Soviet Russia, to Sergio D’Angelo, an Italian Communist visiting Moscow, urging him to deliver the pages to a Milan publishing house run by Giangiacomo Feltrinelli. When Soviet authorities learned this, they forced Pasternak to send telegrams begging Feltrinelli to stop publication. But Pasternak had asked Feltrinelli to heed only telegrams in French, and the note he sent asking to halt publication was written in Italian. “Oh, how happy I am,” Pasternak later wrote to the Italian publisher, “that neither you, nor Gallimard, nor Collins have been fooled by these idiotic and brutal appeals accompanied by my signature (!), a signature all but false and counterfeit, insofar as it was extorted from me by a blend of fraud and violence.” “Doctor Zhivago” was released in Italy in September 1957, and soon afterward editions of the novel appeared France, England, and the U.S.

“The Zhivago Affair” makes compelling use of new research to illustrate Cold War techniques on both sides of the Iron Curtain. The CIA, having obtained a copy of Pasternak’s book from British intelligence, saw “Doctor Zhivago,” which remained banned in Communist countries, as a “weapon.” Secretly, the CIA organized the printing of a Russian-language of the book, and distributed copies to Soviet and Eastern European citizens at the World’s Fair in Brussels in 1958 and again at the World Festival of Youth and Students in Vienna in 1959. “Books differ from all other propaganda media,” wrote the CIA’s chief of covert action, “primarily because one single book can significantly change the reader’s attitude and action to an extent unmatched by the impact of any other single medium.”

There are glimpses of humor in “The Zhivago Affair,” such as when Pasternak rejects the suggestion that Nabokov translate his novel into English (“That won’t work; he’s too jealous of my position in this country to do it properly”). But nothing can soften Finn and Couvée’s description of the attacks on Pasternak after “Zhivago”’s publication in the West. During this “near-frenzy of condemnation,” the author was attacked extensively in Soviet periodicals, publicly denounced by former friends, followed by the KGB, expelled from the writers union, and denied medical care. He was forced to turn down the Nobel Prize, and told that he could not accept royalties from foreign sales. (Accused of smuggling royalties to the author, Ivinskaya was once again sentenced to a forced-labor camp.) Pasternak considered emigration, even suicide. His ordeals came to seem particularly unfair in 1964, four years after his death, when Khrushchev, having obtained a samizdat copy of “Doctor Zhivago,” concluded: “We shouldn’t have banned it. I should have read it myself. There’s nothing anti-Soviet in it.”

Finn and Couvée document Pasternak’s tribulations with an elegant straightforwardness. There’s something invigorating in their portrait of a novelist so deeply devoted to his art. But “The Zhivago Affair” is too complex to settle into simple idealism. It powerfully evokes a time and place in which aesthetic integrity yielded dire consequences, and in which acts of heroism might also be acts of madness. As Pasternak himself put it: “In every generation there has to be some fool who will speak the truth as he sees it.”

The New York Review of Books.