“What's your favorite first book by an author ever?” That's the question that launches the seventh year of the NBCC Reads series, which draws upon the bookish passions of our members and honorees. Here's the sixth in this new series. It's not too late to send your critical essay on your own favorite to janeciab@gmail.com. 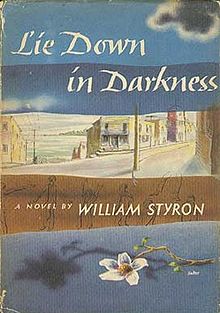 As I recall, I was rather late in encountering William Styron's LIE DOWN IN DARKNESS, but reading it was nevertheless a kind of awakening.  The fact that the author was 26 years old both inspired and terrified me, in part because I recognized the profound wisdom he had earned by way of a (premature?) fascination with death.  More significant was the way he blurred the line between gorgeousness and suffering, showing me it was possible to write about tragedy and self-destruction in prose that took my breath away.  It may seem obvious now, but that approach seemed newly brave and important to me; one's inner demons could wrestle right alongside one's reach for the sublime.  This urgent discovery helped me find courage to explore my own places of devastation and beauty without feeling that one had to be shoved aside to make room for the other.  A novelist didn't have to apologize for sustaining both a lyrical and relentless concern with despair.  A novel could aim downward and refuse to rise.

When I read the memoir DARKNESS VISIBLE many years later, and learned so much more about Styron's lifelong struggle with debilitating depression, my admiration for his first novel grew even more.  Somehow that gracefully burdened 26 year old wrote the way he did not only because of but also in spite of his agonized fears and sorrows.  That was a lesson I retain to this day.

Elizabeth Rosner's newest novel ELECTRIC CITY is forthcoming from Counterpoint Press in October 2014. Her previous novels THE SPEED OF LIGHT and BLUE NUDE were both national best-sellers. A new poetry collection GRAVITY will be published by Atelier26 Books in Fall 2014. She lives in Berkeley and has been a teacher of writing for 30 years. http://www.elizabethrosner.com