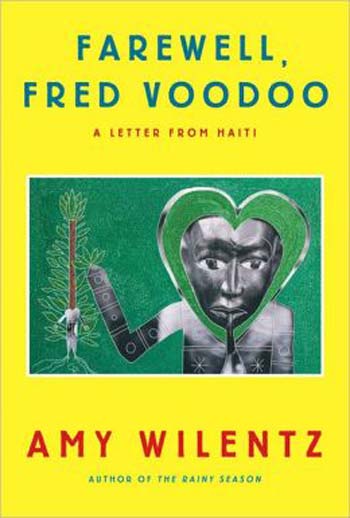 First, that title. Journalist Amy Wilentz explains it as a smirk, a shorthand of international reporters for the voluble Haitian man (or woman) in the street, source of reliably juicy quotes. She suspects some Brits still use it. “There is a reason that awful and potent name has stuck with me: Fred Voodoo,” Wilentz writes. “It sums it all up, in a way. First of all, how Haitians have been reduced to a very few things in the outsider’s mind, and even those things are not understood.”

In her gritty, surprising memoir, Wilentz enlarges her reader’s understanding and discomfort. She insists on sampling the force of Haitian history and its place in global economics, on stopping to smell the predatory journalism and an engorged, counterproductive international aid scene. This is a rare, rigorous memoir with a bibliography and index, and its author’s sharp observational experience from living in Haiti for two years and reporting there for 20, writing for the New Yorker and the Nation magazines.

Wilentz loves Haiti. She admits it on page three. And then she indicts that affection on page 191:

“When I was new in Haiti, I hung out one evening with a bunch of Haitian women in St. Martin, a popular quarter in Port-au-Prince. There had been some political unrest that day, a demonstration, a shooting. We had been in the middle of it all, me, Loune, Beatrice, and Bernadette. It was exhilarating, and now we were sitting on small, straw-seated Haitian chairs and a mattress in a room with a family complex in a warren of cinder-block buildings near a soccer field. We were chatting and relaxing as the sun came down and the city cooled off, I turned to Beatrice and said, thoughtlessly, ‘I love Haiti.’  And she lifted her soda can to me and replied, ‘Well, then, I will give you my Haitian citizenship, and you give me your U.S. passport. You can stay here, but I’m leaving.’ “

That’s a long quote, but a dilly.  “Farewell, Fred Voodoo” is packed with them. Wilentz knows the jokes and aphorisms. She speaks Creole, and we attend to her marvelous ear. She begins each chapter with a Haitian saying and its English translation: “The loaded-down donkey cannot stop” and “Don’t curse the crocodile before you cross the river” and “not yet finished, already collapsed.” She strips out cant and cliché – the little boys without pants in the countryside, the journalists peddling “the clichés of mercy.” Indeed, it is hard to conjure a more blistering indictment of American journalism than the chapter called “The Violent-Sex Cure,” an examination of a Mother Jones reporter who appropriated the trauma of a Haitian rape victim to write a risible, titillating account of the reporter’s own sexual quirks. Wilentz makes this worth reading because she puts the transgression within the larger journalistic enterprise, and her own “I love Haiti” impulses. And because so much life is lived outdoors in poor countries, especially poor, hot countries, outsiders with cameras and notebooks can react like wretches at a feast.

The 2010 earthquake rang the dinner bell.  “Farewell, Fred Voodoo” examines the humanitarian impulse in Bill Clinton, Sean Penn, and several missionaries struggling with the same incongruities that Graham Greene caught in 1966 on the pages of “The Comedians.” This novel helped kindle Wilentz’ fascination with Haiti, and eventually led to her well-regarded 1989 nonfiction work, “The Rainy Season.”  Now we have this poignant sentence in her current book: “What is an American actor doing running a refugee camp, and what is it about Penn, and Haiti, that allowed such a thing happen?”

Wilentz is fair to Penn, even as she allows us to see him as a boy playing king on a tropical island, and she is assiduous about not romanticizing Haiti. Four-fifths of its college-educated live abroad, unemployment is the norm and only about ten percent of the population has intermittent electricity.  And yet there is also “humor, hierarchy, respect, deference, generosity…cleanliness, hospitality, eloquence, storytelling.”

Ah yes, storytelling. Haiti makes you think, Wilentz writes. And so does this moving lament and love letter.

Review in the New York Times.

Karen R. Long is manager of the Anisfield-Wolf Book Awards, presented by the Cleveland Foundation. She is the former book editor of the Cleveland Plain Dealer. In 2002, the Associated Press named her the best feature writer in Ohio, and in 2006 she won the University of Missouri Lifestyle Journalism award for best magazine profile. She is the mother of three children.