In the weeks leading up to the March 13 announcement of the 2013 NBCC award winners, Critical Mass highlights the thirty finalists. Today, in our 30 Books 2013 series, NBCC board member Rigoberto González offers an appreciation of Bob Hicok's poetry finalist, 'Elegy Owed' (Copper Canyon Press). 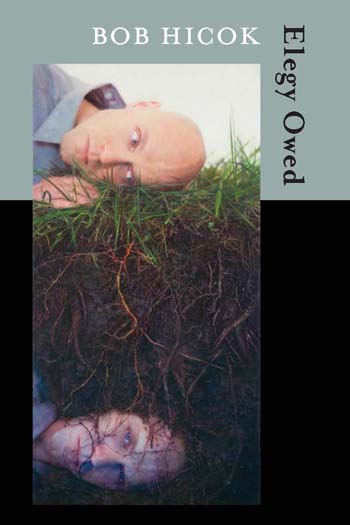 Bob Hicok’s seventh collection of poems takes a decidedly serious tone, though that doesn’t necessarily mean he has distanced himself from the trademark wit and comic turns that have regaled readers since he first burst upon the poetry scene in 1995 with his critically-acclaimed collection The Legend of Light. Since then, his popularity has grown as a poet whose keen eye can turn any observation into a curious encounter, any exchange into a memorable story. His third collection, Animal Soul, was a 2001 finalist for the National Book Critics Circle Award in poetry, a recognition that silenced those naysayers who questioned Hicok’s casual tone and accessible narratives. Hicok has remained steadfastly loyal to his storyteller instincts even during a period when elliptical verse and fragmentation were devices gaining ground in American poetry.

In Elegy Owed, Hicok paves a series of pathways toward the melancholic realm of grief, loss and lament. Absence is a nuanced space that speaks to the death of parents, but also to the ends of things, like nature, relationships, the aging body, memory and security–this loss particularly prescient given its negotiation of the 2007 shootings at Virginia Tech, where Hicok is a member of its faculty. What remains are the ghosts that inspire a kind of rescue from silence, maybe from death itself: “Everyone is alive as long as the poem is alive.”

Pulled out of the darkness, Hicok’s exquisite elegies are at times caustic, comic and even fatalistic, pointing out the folly of becoming attached to the ephemeral, of projecting duration on the temporary. But it is precisely this human condition–falling in love with people, things, and even poems–that allows us to believe that our personal experiences, even the heartbreaking ones, are worth living for:

I had no business trying to see you leave, see death

arrive, I owe you an apology, an elegy, I owe you

the drift of memory, the praise of everything.

Rigoberto González, author of eight books and recipient of both Guggenheim and NEA grants, reviews for the El Paso Times twice a month and is currently teaching at the MFA writing program of Rutgers-Newark, the State University of New Jersey.