C.D. Hermelin, on behalf of the School of Writing at The New School and the NBCC, interviewed Aleksandar Hemon, via email, about his book The Book of My Lives (Farrar, Straus & Giroux), which is among the final five selections, in the category of Autobiography, for the 2013 NBCC awards. 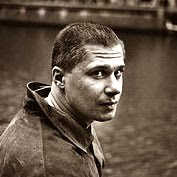 AH: Well, I would think that living/dying is what every human being does, while killing is a little more exclusive, even in a war. But there is also a Bosnian expression, roughly translatable as: “Let’s see who lives and who dies,” used when someone is overly optimistic or confident in predicting the future. The sentence you quoted engages the idea that the distribution of the future depends on the distribution of life and death, as well as on the distributors of death.

CDH: In The Book of My Lives you make special mention that your professor's essay-writing course was the only writing course you've ever taken. Did the rest of your development as a writer take place through your own experiments with writing—and are there any blank spots that you feel like an education could fill? Can a writer be over-educated in writing itself?

AH: All writing is experimenting with writing. One of the false promises of the creative writing industry is that by studying one acquires a stable set of transferable skills, like those of a pilot or a neurosurgeon, who, one would hope, don’t experiment while at work. What is implicitly promised is expertise, taught by confirmed experts, which can be deployed as needed, regardless of what is at one’s writerly hand. I suppose that what you mean by education—taking a number of courses and completing a number of projects for grades—can improve one’s writing, but the ceiling for that improvement is competence. And competence plays a great role in getting a job, but no role in art.

As for blank spots, all the books I haven’t written or finished are blank spots—I don’t know what I’m doing or what I’m going to do, and no education, other than compulsive reading, could prepare me for what I need to do. Figuring it all out is writing, a mode of engagement with the world by way of language. The worst thing for a writer to have is the fear of not knowing. Creative writing education can serve as a pill that numbs, but does not eliminate, that fear. Drugged up, one could easily start going only to those spaces where the competence applies. Whereas I think that a writer should always go towards what s/he doesn’t know.

CDH: Very soon after you meet your ex-wife L, you declare that you will marry her after she leaps around a chair. When you meet your wife Teri, you nearly fall in love with her at sight. This fits in with your larger theme of recognizing moments and their ability to create befores and afters—but I wondered if, after relying on impulsive emotion and that leading to your first divorce, you have a harder time trusting that first rush of emotion, and how you balance your logical side with your emotive side in moments in your life like those two.

AH: It could be my age, but I do not recount my life in terms of wrong/right decisions. I do not think that my first marriage was a mistake, difficult as it was. We tried our best, with our respective limitations, and I’d rather have tried than protect myself from mistakes. (Another bad thing for a writer and/or civilian is the fear of mistakes.)

But that moment was not a rush of emotion. The proper analogy would be—if you’d allow me using soccer—running with the ball, while the defense is coming upon you, the situation on the pitch constantly changing and there is a moment for a perfect pass to your teammate. If you miss that moment, there is no pass, no connection, you might lose the ball, the other team might score. And if you don’t try, it cannot happen. Recognizing that moment has nothing to do with a rush of emotion, but rather with a sense of connectedness with the situation and people on the pitch, as well as your accumulated experience as a soccer player.

AH: There is terrible consensus in this country that positive thinking leads to positive outcomes, so that if you find yourself in a difficult situation you can positive-think your way out. And if you’re stuck or don’t make it, it’s your damn fault, as you were not sufficiently positive—your hope, as it were, was not audacious enough, so it’s your fault you’re unemployed and not a president.

But I think there’s much to be said for the audacity of despair, for appreciating the moment when one reaches what seems like the bottom, the point when there’s nothing to lose. Reaching that point could be euphorically liberating, partly because the future is so uncertain that you can only make the next decision. Another sports analogy: imagine skiing downhill at great speed. Merely hoping to make it to the bottom, which is far away, does not help much in that situation. You have to make a series of correct decisions in the moment, knowing that a single wrong decision can break your back. That is exhilarating and terrifying.

Unfortunately, I’ve grown to recognize the state of disaster euphoria in myself as it happens.

CDH: You use parentheses very expertly, and they add an interesting layer to your voice—will you talk about the process of deciding when to deploy parentheses?

AH: I don’t only use parentheses. I use dashes, semi-colons, commas etc. I like my sentences to have many rooms.

And the process is editing. The fact of the matter is that neither being nor thinking are linear. Yet we read linearly: from left to right (or some other linear way). So the problem (and the magic) of literature is how to recreate the multidimensionality of experience on a page full of lines. What differs literature from other forms of writing is that no sentence in a literary text contains just one thought, no matter how hard you might try to simplify. A book not containing multitudes of multitudes is a memo.

Aleksandar Hemon is the author of The Lazarus Project, which was a finalist for the 2008 National Book Award and National Book Critics Circle Award, and three collections of short stories: The Question of Bruno; Nowhere Man, which was also a finalist for the National Book Critics Circle Award; and Love and Obstacles.  Born in Sarajevo, Hemon visited Chicago in 1992, intending to stay for a matter of months. While he was there, Sarajevo came under siege, and he was unable to return home. Hemon wrote his first story in English in 1995. He was awarded a Guggenheim Fellowship in 2003 and a “genius grant” from the MacArthur Foundation in 2004.  He lives in Chicago with his wife and daughter.

C.D. Hermelin is a writer living in Brooklyn. He sometimes writes personalized stories as The Roving Typist (rovingtypist.com).  He is currently completing his MFA in Creative Writing at The New School School of Writing.