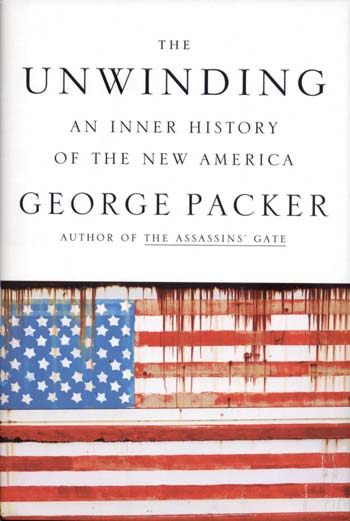 Krista Gampper, on behalf of the School of Writing at The New School and the NBCC, interviewed George Packer, via email, about his book The Unwinding: An Inner History of the New America (Farrar, Straus & Giroux), which is among the final five selections, in the category of Nonfiction, for the 2013 NBCC awards.

KG: There are perhaps five main characters at the heart of this book whose stories are weaved together with cameos of other, often well-known characters. I am curious how you initially connected with the main characters and how you decided that throughout the work these five—Dean Price, Jeff Connaughton, Tammy Thomas, Silicon Valley, and Tampa–would tell the story of The Unwinding.  Obviously, Tampa and the Silicon Valley are places, but I am still interested in how you were able to connect with them and the people in these places.

GP: I found them partly by design, partly by happenstance. I wanted to write about people in different parts of the country, from different backgrounds and walks of life: rural America, the Rust Belt, the exurban housing bust, Washington, Silicon Valley, Wall Street. With Tammy Thomas, I was looking for a woman who was active in her community somewhere in the Rust Belt. That could describe a lot of people without turning up anyone in particular, and I was very lucky to come across her name, quite late in the work, because Tammy and her story are much more remarkable than the abstract label. I met Dean Price while working on a New Yorker Magazine piece (where he appeared only briefly) and almost immediately knew that he belonged in my book. Not just because he comes from the tobacco belt of North Carolina, but because he's a wonderful talker, a great guide to his extraordinary, though obscure, life—original and at the same time deeply, typically American. In the cases of Jeff Connaughton in Washington, Peter Thiel in Silicon Valley, and Michael Van Sickler, a newspaper reporter in Tampa, it was similarly a matter of running across people in my work as a New Yorker staff writer who would allow me to tell the larger story of America that's the project of The Unwinding, while finding them interesting in their own right. It was the luck that comes with doing a lot of looking while having some idea of who I was looking for.

KG: In the text's “A Note On Sources,” you mention that the book “owes a literary debt to the novels of John Dos Passos's great U.S.A. trilogy,” and I wonder if you could speak more to its influence and more about why you decided to structure The Unwinding in the way that you did, as a sort of collage.  To take the question further, do you think or did you want the shape of the narrative in turn to reflect or speak to its content?

GP: When I got started in late 2008, I didn't set out to write a book like that at all. I imagined a more conventional account of America from Reagan to Obama, with a focus on particular institutions in crisis or decline, and certain well-known individuals who represented them. But the task of recapitulating all that familiar history soon bored and defeated me. I was much more inclined to spend my time with someone like Dean Price in Rockingham County, North Carolina, and see what the turmoil following the financial crisis was doing to him and his area. Those conversations were what energized me. I began to wonder if I could cover the same period—late seventies to the present—and the same theme of institutional change and decline, but through ordinary Americans' lives.

For a long time it seemed impossible—such a specific set of requirements!—but gradually I realized that the people I was talking with had lived the history I wanted to illuminate. So it became a book about people the reader hadn't heard of, people shaped by a common history over several decades but in separate places and ways. I looked for a model of this kind of book, and the only example I knew of was fiction—Dos Passos' U.S.A. trilogy, which I read and loved years ago. I took U.S.A. as my inspiration, which gave me the idea of including short sketches of the lives of some American celebrities who shaped our culture during the same decades (though in a very different form from Dos Passos'), and collages of found texts from certain years along the way.

KG: Was there a particular time or moment where you knew you wanted to write about the current state of the U.S.?  I am curious about how the book began, what made you decide to take it on, or how long the book was stirring around before you wrote it.

GP: After covering the Iraq War for four years in The New Yorker, I turned to American politics and economic life in 2008. The book began with the events of that year—financial crisis, banks closing, car makers going under, and Barack Obama getting elected president. It was one of those unmistakably historic years, and I saw it as the end of the era that had begun with Reagan, the era of my entire adult life. That's the kind of thing that makes me think of writing a book: a big event that needs a more human-scale dramatization. As things turned out, American politics didn't change as much as some of us expected. But American lives underwent a period of reckoning, taking stock, looking back, reconsideration and transformation. That was the story I ended up writing.

KG: As a few final questions I'd love to hear what surprised you most while working on The Unwinding and/or what was most exciting to discover while writing the book.

GP: The whole experience of The Unwinding was a discovery—the most exciting of my writing life. Once I made the decision to use an unusual form for non-fiction, a lot of new things became possible. I got rid of the first-person narrator, which I'd always used in both books and magazine pieces, and instead allowed the voices of the characters to carry the prose style and point of view, indirectly but intimately—including the celebrity characters, whose autobiographies and interviews became the main material. The tale could unfold by juxtaposition and implied connection rather than with a guiding narrator who had to figure everything out on the page. Moving toward fiction while keeping every line grounded in fact turned out to be just the right amount of liberation.

KG: Thanks very much for your time and Congratulations on your nomination for the National Book Critics Circle Award!

George Packer is a staff writer for The New Yorker and the author of eight books, including two novels, a play, and five works of non-fiction. The Unwinding: An Inner History of the New America won the 2013 National Book Award. The Assassins’ Gate: America in Iraq received several prizes and was named one of the ten best books of 2005 by The New York Times Book Review. He is the editor of a two-volume edition of the essays of George Orwell, and of The Fight Is for Democracy: Winning the War of Ideas in America and the World. His play Betrayed, based on a New Yorker article, ran Off Broadway in New York for five months in 2009 and received the Lucille Lortell Award for Outstanding Play. He lives with his family in Brooklyn.

Krista Gampper is an MFA student concentrating in Nonfiction at The New School Graduate Writing Program.  She lives in Brooklyn.