What is your favorite National Book Critics Circle finalist of all time? The first NBCC winners, honored in 1975 for books published in 1974, were E.L. Doctorow (Ragtime, fiction), John Ashbery (Self-Portrait in a Convex Mirror, poetry), R.W.B. Lewis for his biography of Edith Wharton, and Paul Fussell (The Great War and Modern Memory, criticism). In 2014 the National Book Critics Circle prepares to celebrate nearly forty years of the best work selected by the critics themselves, and also to launch the new John Leonard award for first book. So we're looking back at the winners and finalists, all archived on our website, and we've asked our members and former honorees to pick a favorite. Here's the nineteenth of dozens of choices in our latest in six years of NBCC Reads surveys. 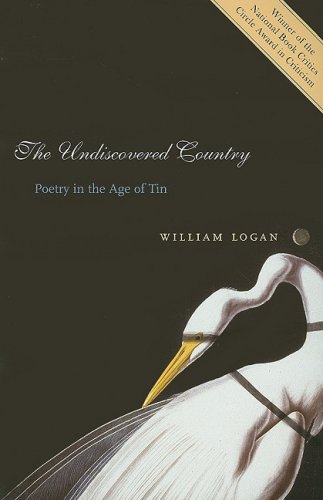 William Logan once heard a poet say that poets in the 1950s were afraid of three things: “Randall Jarrell’s reviews, Robert Lowell’s poetry, and the atomic bomb.” Today’s poets have three different fears: William Logan’s reviews, John Ashbery’s poetry, and not getting tenure.

The fear of Ashbery amounts to a variation on Flannery O’Connor’s comment on the influence of Faulkner on Southern writers: “Nobody wants his mule and wagon stalled on the same track the Dixie Limited is roaring down.” The dread of not getting tenure reflects that few poets had the foresight to apply, as William Carlos Williams did, to the University of Pennsylvania’s medical school.

The fear of Logan is of a different order. Part of it springs from the virtues on display in The Undiscovered Country and his Verse Chronicle columns for The New Criterion — a wit, erudition, and stylistic distinction unique among contemporary American poetry critics. Another part involves that Logan is an award-winning poet whose reviews can’t be dismissed the carping of a naïve outsider who doesn’t understand the difficulties of the art.

But the fear of Logan may result, above all, from his fearlessness. He is “the pit bull of mainstream poetry reviewers,” as the poet Maureen McLane has said. His reviews have teeth in an age in which literary criticism increasingly amounts to the gumming of food. In an interview in Prospect, Ruth Franklin recalled an essay in which George Orwell lamented that the novel was “being shouted out of existence” by the inflation of praise and that “to apply a decent standard to the ordinary run of novels is like weighing a flea on a spring-balance intended for elephants.” Orwell’s view, as Franklin summarized it, is that “since all novels published at a given moment are basically fleas, critics are forced to recalibrate their thermometers to judge the difference between one flea and another flea, making distinctions that aren’t really important.”

In the poetry reviews collected in his 2005 NBCC criticism-award winner The Undiscovered Country, Logan refuses to call a flea and elephant or to deny that an elephant has fleas. Adrienne Rich “settled for the seduction of style long after her style was seductive any more.” Robert Penn Warren wrote “what must be the worst poem about the American Indian since ‘Hiawatha’.” And if Seamus Heaney’s Electric Light has its pleasures: “Heaney loves to write about being a poet, a subject almost poisonous to poetry. … There’s a duet with Virgil (even the idea is self-flattering) that made me cringe, as well as a low-temperature translation of the Ninth Eclogue, where an old songster passes his songs, a little grumpily, to a younger (more self-flattery).”

Logan is equally clear and frank about the poets he admires, who include Lowell, W.H. Auden, and Marianne Moore. But what sets his work apart is his willingness to be a critic, not just an appreciator, of poetry. He explains why in the introduction to The Undiscovered Country:

“It’s often said that critics shouldn’t write negative reviews, because bad poetry will take care of itself (time will take care of it, too). With so few books in a given year worth remembering, why review those that will soon vanish from memory? I love reviewing poets I admire (isn’t that what a critic lives for?), but if you write only such reviews, how can a reader trust your praise?”

Implicit in many critics’ unwillingness to write negative views is the idea that poetry has too fragile a place in American culture to withstand even a wrist slap. Logan knows better. In The Undiscovered Country he pays poetry the compliment of assuming that — however imperiled it may be in an era hostile to the form – the best of it has nothing to fear from the truth.

Janice Harayda (@janiceharayda) is a novelist and award-winning journalist who has been the book editor of The Plain Dealer and a vice-president for awards of NBCC. Her articles and review have appeared in The New York Times, The Wall Street Journal, The Washington Post, and many other publications. Harayda runs the One-Minute Book Reviews blog and speaks frequently about reviewing at writers’ conferences and elsewhere. She recently served as the writer-in-residence at the Fairhope Center for the Writing Arts in Fairhope, Ala