What is your favorite National Book Critics Circle finalist of all time? The first NBCC winners, honored in 1975 for books published in 1974, were E.L. Doctorow (Ragtime, fiction), John Ashbery (Self-Portrait in a Convex Mirror, poetry), R.W.B. Lewis for his biography of Edith Wharton, and Paul Fussell (The Great War and Modern Memory, criticism). In 2014 the National Book Critics Circle prepares to celebrate nearly forty years of the best work selected by the critics themselves, and also to launch the new John Leonard award for first book. So we're looking back at the winners and finalists, all archived on our website, and we've asked our members and former honorees to pick a favorite. Here's the tenth of dozens of choices in our latest in six years of NBCC Reads surveys. 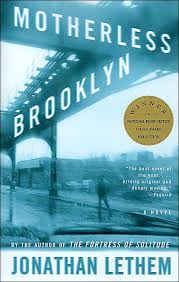 My favorite NBCC winner is Jonathan Lethem, who won the National Book Critics Circle Award for Fiction in 1999 for his incredible novel Motherless Brooklyn. In fact, Lethem's win was the reason that I found out about the NBCC in the first place.

I'd been a fan of his writing ever since he was still solidly in the speculative fiction camp, regularly selling stories to Asimov's Science Fiction and CRANK! and Pulphouse, and my interest continued into his early novels, the bizarro hardboiled Gun, With Occasional Music and the mind-bending Phildickian Amnesia Moon. As the years passed, his use of the fantastic became less explicit and more metaphorical, and by the time Motherless Brooklyn came along, my initial thought was that he'd sold out.

A strange reaction for someone who'd been so invested in Lethem's writing, but it was in my gut: he was turning his back on speculative fiction. (This, of course, wasn't true; he was simply finding new ways to integrate his passions, both in and out of genre.) Still, I decided to give the book a try, AND I COULDN'T PUT IT DOWN. I was born in Brooklyn, but lived there for only six months before my parents relocated us to North Carolina, and so I was fascinated to discover my birth city through the explorations and exhortations of Lethem's protagonist, the Tourette's-afflicted linguaphilic detective, Lionel Essrog. I still remember the character's name all these years later without having to google it, as well as his most memorable verbal explosion: “Eat me! Eat me! Eat me!”

He had done something quite amazing and radical: Lethem had visibly shifted the generic focus in his writing, yet not lost what makes his writing so compelling. He had brought me into his more realistic world, and I loved him for it. With his NBCC win, his label became quickly cemented as “a literary writer” and “a New York writer,” but I found that I didn't actually mind, as long as he continued to write to his passions. When The Fortress of Solitude was released to wide acclaim, I was nothing but happy for his success, although he as a person became far less accessible in my mind; during a reception and party at the house of John Kessel (my former mentor, and the award-winning author of phenomenal books such as Corrupting Dr. Nice), Lethem was affable and relaxed, and as much as I wanted to tell him what a fan I was of the entire output of his career, I was instead paralyzed with the fear that I would sound astoundingly stupid and banal. I left that night having said barely ten words to the man.

Lethem is, along with Michael Chabon, one of the small (but growing) number of literary darlings who champion the fantastic in their work and discourse, and has been a major force in the relaxation of intolerance toward genre fiction in realist writing. Before his inroads into what us speculative types like to call the “mainstream,” a story like “Super Goat Man” could never have been published in The New Yorker. He has made it possible for much lesser-known writers such as myself to be able to see their strange interstitial type of fiction published in venues which, only a couple of decades ago, would have turned up their noses at the slightest whiff of the speculative. He's one of my literary heroes, leading by example, and I'm hoping that the next time we meet, I'll be brave enough to tell him so.

Jason Erik Lundberg is the author of several books of the fantastic — including Strange Mammals (2013), The Alchemy of Happiness (2012), and Red Dot Irreal (2011) — as well as the Bo Bo and Cha Cha children's picture book series and more than a hundred short stories, articles, and book reviews. He is also the founding editor of LONTAR: The Journal of Southeast Asian Speculative Fiction, series editor for The Epigram Books Collection of Best New Singaporean Short Stories, editor of Fish Eats Lion (2012), and co-editor of A Field Guide to Surreal Botany (2008) and Scattered, Covered, Smothered (2004). A graduate of the Clarion Writers Workshop, Lundberg holds a degree in creative writing from North Carolina State University and currently lives in Singapore. Jonathan Lethem's new novel, Dissident Gardens, currently occupies the top spot on his to-be-read pile.