What is your favorite National Book Critics Circle finalist of all time? The first NBCC winners, honored in 1975 for books published in 1974, were E.L. Doctorow (Ragtime, fiction), John Ashbery (Self-Portrait in a Convex Mirror, poetry), R.W.B. Lewis for his biography of Edith Wharton, and Paul Fussell (The Great War and Modern Memory, criticism). In 2014 the National Book Critics Circle prepares to celebrate nearly forty years of the best work selected by the critics themselves, and also to launch the new John Leonard award for first book. So we're looking back at the winners and finalists, all archived on our website, and we've asked our members and former honorees to pick a favorite. Here's the eleventh of dozens of choices in our latest in six years of NBCC Reads surveys. 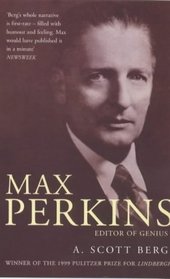 It's impossible to pick a single favorite from this list. But one book stands out as having made an impression on me that is vivid more than three decades later: A. Scott Berg's “Max Perkins: Editor of Genius,” a finalist for general nonfiction in 1978. The book is not just an intelligent, revelatory biography of an extraordinary and influential literary figure, although it's certainly that. Its depiction of Perkins' relationships with F. Scott Fitzgerald, Ernest Hemingway, Marjorie Kinnan Rawlings, Thomas Wolfe and other authors changed my ideas about how writers work with editors, and how essential that collaboration can be to the creation of enduring literature.

Colette Bancroft is a National Book Critics Circle board member and book editor of the St. Petersburg Times.