In the weeks leading up to the February 28 announcement of the 2012 NBCC award winners, Critical Mass highlights the thirty finalists. Today in our series, NBCC board member David Biespiel offers an appreciation of biography finalist The Passage of Power (Knopf) by Robert A. Caro. 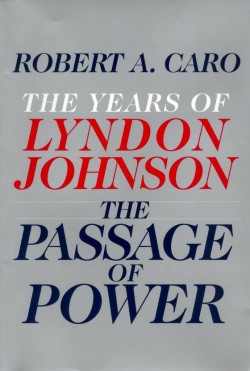 I have anticipated every book by Robert Caro about Lyndon Baines Johnson as if I were waiting for a long lost friend, a wayward brother, and an absent child, all rolled into one, to come home. As an expatriate Texan, I have found reading Caro's biography of Johnson — bighearted, insecure, domineering, strategically brilliant, and petty as LBJ was — to be like having a reunion with all that is great and worrisome about my homeland. It's like a renewal of a love affair, my lover affair, with the statewide political world of Texas. “Why write fiction,” the Texas reporter Molly Ivins used to say, “when you can cover the Texas Legislature.” How badly am I smitten? The other day, the Texas Tribune released its Lawmaker Explorer app that is a guide to the financial interests of state lawmakers. I haven't lived in Texas since 1982. But I have been devouring the Trib app as if I were reading a box score in early August. There are 254 counties in Texas. This could take me a while.

Lyndon Baines Johnson dreamed of being president of the United States his entire life, beginning with his childhood in the Hill Country (that's Blanco County). Nearly every decision he made was done so in the pursuit of that one goal, though he knew more than most how difficult, almost impossible, the achievement of his goal was in the 1950s and 1960s given that he was a southerner who was legislative leader and often water carrier of a racist post-Confederacy Senate caucus and a Texan to boot with deep ties to the oil industry. Man, how times have changed. A southerner with ties to big oil has proven to be a winning formula since about 1980.

More important than just reaching the goal, Johnson was in pursuit of power itself. “I do understand power, whatever else may be said about me, I know where to look for it and how to use it,” Johnson once remarked. His mastery of power began even with his personal space. He used his entire body to intimidate and lean into, sometimes onto, his interlocutors with a Texas-sized smother, what is now called simply the Johnson treatment. He referred to bills in the Congress as “my children.” And between November 22, 1963, when he became president after the assassination of John F. Kennedy, until he stepped down in despair on January 20, 1969, Johnson steered through the Congress and signed into law (at times by sheer force and, not to be underestimated,with the aid of considerable majorities in both houses) hundreds of landmark  pieces of progressive legislation. He did so in such a breakneck manner that pundits and politicians trapped in today's stalemates wonder how he did it and wish it could be so again.

When we think of the Great Society, what we mean is: Medicare, Medicaid, the Civil Rights Act, the Voting Rights Act, aid to education, Head Start, the creation of the National Endowments for the Arts and for the Humanities, the creation of the Corporation for Public Broadcasting, the Job Corps, Upward Bound, motor vehicle safety laws, labeling laws, clean air laws, clean water laws, the Endangered Species Preservation Act, the National Historic Preservation Act, increases in the minimum wage, plus hundreds of other laws that that gave structure and substance to securing for generations of Americans the social safety net. All this Johnson accomplished in a mere five years.

LBJ defined the legislative era of the 1960s and he reaffirmed the New Deal bargain between the Democratic Party and the American middle class. It would be the last time a president so forcefully moved progressive legislation of such scale and importance through the Congress until Barack Obama signed the Affordable Care Act in 2010. But Johnson's massive domestic achievements were swarmed by his equally massive failure to resolve the failure of the Vietnam War (the subject of Caro's next book) that cost LBJ his legitimacy, his legacy, his office, and the lives of some 16,000 Americans and countless more Vietnamese between 1963-1968.

Since 1982, however, it's Robert Caro who has been giving Lyndon Baines Johnson, the 36th president of the United States, the Caro treatment with a five-book biographical epic, The Years of Lyndon Johnson, that has seen to date four detailed, groundbreaking, sometimes bloated, other times controversial, and always spellbinding novel-like journeys.

With The Passage to Power, Caro takes a look at about five years of the Johnson biography from the end of the Eisenhower era in the late 1950s through the 1960 presidential campaign that featured Johnson so terrified he might lose that he ran for president by not running, hoping to be drafted, and culminating in JFK picking LBJ for vice president over the objections of his brother, Robert F. Kennedy, plus the squeaker of victory over Richard M. Nixon that November, a victory Caro shows to have been stolen by LBJ's minions in the south lands of Texas. Then the book focuses on the darkest years of Johnson's career, his vice-presidency, followed by the shock of his elevation to the presidency after JFK's death in Dallas, and the few months thereafter when Johnson quickly seizes the levers of government, asserts his claims on power, helps bind the wounds of the assassination by creating the Warren Commission (controversial now but it was healing then), usurping the Kennedy agenda (or rather, revealing it to be his own agenda), convincing all of JFK's cabinet to remain in office, including his rival, the slain president's brother, Attorney General Robert Kennedy, and preparing for the November 1964 election that gave Johnson the most lopsided popular vote win in American history.

The Passage to Power focuses on a short period of Johnson's career, just a few years. But in that time Caro reveals how thoroughly LBJ misjudged Kennedy in the run up to the 1960 election, seeing the younger senator as a lightweight, a do-nothing, who was not physically strong enough to withstand a national campaign. Caro unpacks the roots of the LBJ-RFK feud that date back to Johnson telling negative stories about Joseph P. Kennedy, the family patriarch, an act so offensive to young Robert Kennedy that when he first met Johnson, RFK refused even to shake his hand, even though he was but a junior staff assistant to Sen. Eugene McCarthy and Johnson, then, was the minority leader of the Senate.

We read how Johnson stole the 1960 election in Texas for Kennedy just as he did for himself in 1948 (an earlier thievery that earned Johnson the nickname he despised above all, Landslide Lyndon). We see how LBJ attempts to create a rump governmental power base for himself after he's elected vice president by retaining his old power in the Senate as the President of the Senate (his Democratic colleagues spurned him with haste in order to preserve the separation of powers) as well as building up a private foreign and domestic policy office in the West Wing (JFK killed that effort, reducing Johnson's staff and exiling him from the White House over to the Old Executive Office Building next door). It would take Richard B. Cheney to accomplish the vice presidential power grab that eluded LBJ.

When Johnson's usual means of sycophancy failed to lure the Kennedy people to his causes during the vice presidency (they nicknamed him Rufus Cornpone), he was left utterly powerless, floundering like a kind of desperate suck-up. He was so certain his career was finished in early 1963 that he began to advise his staff to look for other work. That, and both Congress and Life magazine were investigating stories about Johnson's political corruption which would have certainly had him kicked off the Kennedy ticket in 1964, left him out of office and in disgrace, and very likely prosecuted as well. When Kennedy died, the investigations, full of damming facts if not evidence of illegal acts, were shelved in the interests of healing a grieving nation.

And we see too how, in December of 1963, just days and weeks after Dallas, Johnson quickly outsmarted his fellow Southern Democrats in the Senate by bringing “his children” of easier bills home in order to pass the Civil Rights bill that Kennedy had all but abandoned. Here Caro is at his best: His hour by hour narrative about how Johnson manipulated his former colleagues to pass not only the Civil Rights Act but also a tax cut is, I don't know, a kind of C-Span thriller for C-Span geeks. And for everyone else.

It's not all love from me, the new Caro book. Caro's treatment of the Johnson-RFK feud at the heart The Passage to Power struggles to clarify facts about the Cuban Missile Crisis. Caro positions the two rivals at opposite sides of the argument about what to do over Soviet missiles in Cuba, with Johnson the more bellicose and Robert Kennedy the more dovish. But the audio recordings now available demonstrate otherwise. Both LBJ and RFK opposed President Kennedy and his ultimate decision — made almost entirely on his own against the wishes of nearly his entire cabinet — to trade the removal of Soviet missiles in Cuba for the removal of American missiles in Turkey. Fred Kaplan has the knottiness of Caro's interpretation in detail in Slate.

Like Gibbon's Decline and Fall of the Roman Empire and Shelby Foote's multi-part Civil War history, Caro's The Years of Lyndon Johnson is epic and genre-defining. Caro, a former journalist, aims for reportage, plot, action and resolution that are unmatched in contemporary biography. As with the excursions into the history of the Senate in Master of the Senate, perhaps the best hundred pages ever written about that dysfunctional and serpentine institution, and the tribute to the Texas Hill Country in The Path to Power, in The Passage to Power, Caro unearths the contexts for understanding a major figure of mid-20th century American politics. For “getting” Texas for all those who don't. And for revealing the uses and abuses of American power. At its worst. And at its best. All embodied by a single, flawed man.