In the weeks leading up to the February 28 announcement of the 2012 NBCC award winners, Critical Mass highlights the thirty finalists. Today in our series, NBCC board member Oscar Villalon offers an appreciation of fiction finalist HHhH (Farrar, Straus & Giroux) by Laurent Binet. 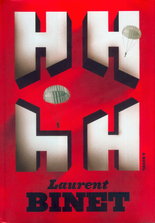 Rarely does a person’s personal obsessions result so profitably from being explored as fully as possible. And rarely does the obsession expand beyond the picayune and quirky to something truly important and far-reaching.

Laurent Binet’s first novel, HHhH, as translated from the French by Sam Taylor, carries a recognizable tone of self-deprecation and self-doubt, a charming modesty characteristic of the work of, say, a Geoff Dyer or that found in the comic fiction of contemporary young writers in the United States. (Binet is 40.) The diffidence of Binet the narrator isn’t mere affectation nor is it entirely rooted in the anxiety of trying to understand an impossible universe. It comes from the bafflement of a modern Parisian finding himself enthralled by events from over 70 years prior—the occupation, ransacking and degradation of what Binet considers the most beautiful city in the world: Prague. (His lack of French chauvinism, by the way, through the entire novel is bracingly refreshing.)

Why, he asks himself, should he bother writing about the assassination of Reinhard Heydrich, otherwise known as “the Butcher of Prague,” the poster boy for the Nazis fascism who has been written about before? Why should he privilege this story above others of courage and suffering from World War II in Europe? (Indeed, the reader can stretch that further and ask, why this story above all the other stories of bravery and treachery—from the distant past or recent events?) And how can he do the story justice?

All Binet can do is tell this true story as best he can, using the techniques of narrative fiction and revealing at every turn whenever he’s had to turn to the speculative to tell an account he can’t pretend to be in complete command of. Binet constantly scolds himself, taking himself to task for embellishing scenes and allowing himself to digress from the central story. His digressions take him through the history of the Third Reich and its barbarities and its personages. (One of those digressions is about the infamous soccer game between Dynamo Kiev and the Nazis, wherein beating the representatives of the Reich would mean death for the Ukrainian side. It’s one of the many incredible events of World War II that Binet rightly points out is worthy of a spectacular book in its own right.)

In his disarming way, he rescues the narrative of the collapse of Western civilization from the fusty, self-righteous stamp of the Greatest Generation and, as much as he can, makes us understand the confusion and cravenness left in the wake of the wickedness sweeping down from Berlin. It’s Hilter and his minions as Attila the Hun and his hordes. It’s the bravery of a few against daunting odds. The title of Binent’s novel refers to the acronym for “Himmlers Hirn heisst Heydrich,” that is, “Himmler’s Brain Is Called Heydrich.” Heydrich and Himmler, necessarily, are central figures here. But the book is really an admiring, moving appraisal of the people who sacrificed everything to try to derail the triumph of inhumanity.

The Rumpus (Review by J.A. Taylor)

The Guardian (Interview with Killian Fox)