In the weeks leading up to the February 28 announcement of the 2012 NBCC award winners, Critical Mass highlights the thirty finalists. Today in our series, NBCC board member Benjamin Moser offers an appreciation of poetry finalist Bewilderment (University of Chicago Press) by David Ferry. 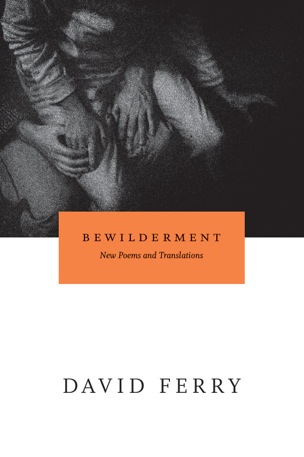 Bewildered by age (reaching nearly 90: “a breath-taking, near-death, experience”), by the loss of his wife (“Where is it that she I loved has gone to, as/This cold sea water’s washing over my back?”) and friends (“It’s still, alas, the same old story: to live/Long is to outlive many”), David Ferry has written a book whose lucidity belies its title, pulling together the many strands in his career as a poet and interpreter of the classics. With translations no less imaginative than his own work—What word in Horace has Ferry rendered as “barfly”? Would Catullus really roll his eyes and write, “Whatever”?—he implicitly asks whether that distinction, “own work” vs. “translations,” exists at all. He summons the poets that have marked his life, modern (Cavafy, Rilke, Montale), ancient (Virgil, Martial), along with unfamous others, most notably his friend Arthur Gold. Printing Gold’s poems, written as he was dying of lung cancer, and responding to them directly beneath, Ferry creates a “near-death” dialogue to which he eventually convokes Virgil himself. In reply to one of Gold’s poems, he writes:

For one thing there’s the way the two key phrases,
‘The year of the fuel crisis,’ ‘Precious the winter light’
Come fully alive with meaning in their recurrence.

It is from recurrence that meaning comes, from the past that the present comes, from reading that writing comes. Ferry’s novelty is not in insisting on his own originality but in his willingness to follow “the others’ lines,/Which are the tracks of somebody gone before,” producing a series of unfoldings: from “the silence that divides the dead from the living” to speech; from “still clinging to the idea of being summer” to calmly sitting in the winter light; from normal American scenes (“That day when Suzie drove us out to get/The lobsters at the lobster place at the cove”; “that restaurant/On Central Avenue in Orange, New Jersey”) to the vine-covered mountainsides of the Holy Land remembered by an anonymous Anglo-Saxon poet.

And so, if his book’s themes include loneliness, age, and death, Ferry also stresses continuity, harmony, and the mystic ability of people to speak to each other across time. And it may be this aspect that, despite Ferry’s insistent downplaying of his own originality, makes his one of the most original and moving books of the year.