In the weeks leading up to the February 28 announcement of the 2012 NBCC award winners, Critical Mass highlights the thirty finalists. Today in our series, NBCC board member Alex Abramovich offers an appreciation of criticism finalist The Grey Album: On the Blackness of Blackness (Graywolf) by Kevin Young. 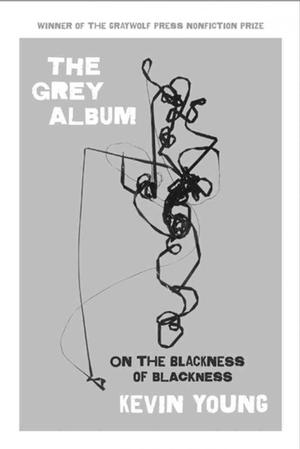 The title of Kevin Young's first book of criticism (he's published several volumes of poetry) is an explicit homage to Danger Mouse—the DJ who spliced Jay-Z's Black Album together with the Beatles' White Album and created a dance mix that was also an essay on American culture and cross-cultural confusion/influence. But Young covers a whole lot of territory before getting to Danger Mouse himself, moving easily from Paul Lawrence Dunbar and Zora Neale Hurston to Bessie Smith, Louis Armstrong, Lauryn Hill, and N.W.A.. Among other things, his Grey Album is a history of American modernism's African-American roots. (In regards to Dunbar’s and black dialect’s influence on a seemingly white modernism, Young writes: “The fact is, William Carlos Williams was read Dunbar as a child, while whole generations of modernists, including Pound, Eliot, and Vachel Lindsay, were raised on Uncle Remus. Their work, in ways little and large, refers not just to Brer Rabbit’s tales but also to their talk: Black English, the ultimate tar baby.”)

But Young's work is as digressive, and impressionistic, as it is argumentative—his is a big book, and an ambitious one—and the sparks fly off in any number of directions. As Dwight Garner wrote in his review for The New York Times, “It’s not a thing to read straight through so much as attentively skip around in…. You can put the needle down almost anywhere.” More often than not, any page you settle on will be full of startling insights (and occasional admonitions):

Those who heard [Smokey Robinson's] “Tracks of My Tears” (1965) grasped that the lover addressed might as well be the country that didn't dare look in the collective black face, unable to face the despair that might be written there.”

…we must read in the physical ways you can literally grasp the pottery of Dave the Slave, a master (or should I say slave) potter whose pots are admired for both their form and for the verses he inscribed on their surfaces, making his jug the world….

Emerging from Charlie Parker's horn was plenty—not just sped-up senses of the melody, not just playing above and below it, but also the notion of plenty itself. Parker's plenty riffs against the rationing of wartime America—felt all the more profoundly against the recording ban by the musician's union in the early 1940s—not to mention against the rationality of the times.

[Bob Kaufman] was so dedicated to poetry that he didn't write it down; he was so much a poet that he committed a vow of silence for over ten years, from Kennedy's assasination to the end of the Vietnam War. While others were out in the street protesting… Kaufman was silent, which is one kind of crucial protest. Perhaps the most crucial.

Soul food is a form of exile.

…where the Sex Pistols chanted 'no future,' gangsta rap said there wasn't even a present.

This is criticism that comes out of life-long engagements with music and language, and with the music that flows through our own, American language. It is punchy, acrobatic, deeply informed, and endlessly energetic—a pleasure to read.