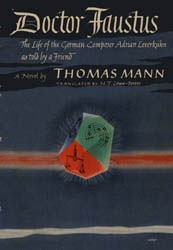 As part of our NBCC Reads series on favorite books about music, we asked Alex Ross—a 2007 winner in criticism for The Rest Is Noise—for his choice. He responded with Thomas Mann's novel Doctor Faustus, and a choice passage from the book:

“It seems to me…that despite the logical, moral rigor music may appear to display, it belongs to a world of spirits, for whose absolute reliability in matters of human reason and dignity I would not exactly want to put my hand in the fire. That I am nevertheless devoted to it with all my heart is one of those contradictions which, whether a cause for joy or regret, are inseparable from human nature.”

Up next: Favorites in rock and blues.