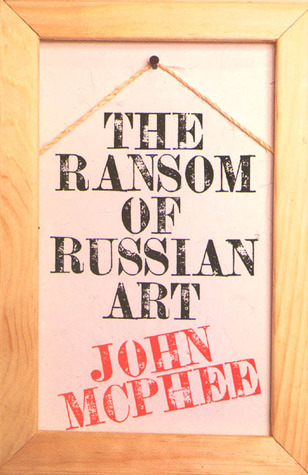 For our most recent NBCC Reads series of posts on Critical Mass, we asked members to select a favorite work of literary journalism. Our call drew a variety of responses, from generous appreciations to debate about the very term itself. We'll be launching a new NBCC Reads question soon. In the meantime, member Andrew David King delivers this appreciation of NBCC finalist John McPhee's 1994 book on art smuggling, The Ransom of Russian Art.

John McPhee has set his polymathic mind to everything from the geologic history of the Golden State to the biology, cultivation, and commodification of oranges—so it makes sense that his 1994 volume The Ransom of Russian Art has him writing down 40,000 words of testimony from a University of Maryland economics professor on a train ride from Union Station to Trenton. The conversation, however, only obliquely deals with commerce: in it, McPhee queries Norton Dodge about his extensive excursions into Soviet territory to locate underground (and thus, by definition, dissident) artists. Dodge—well-networked with diplomats, experts, and public figures—amassed more than collected their artworks, a pursuit that filled barns on his Chesapeake bay farm with canvases and helped elevate dissident painting to the level of dissident writing.

Despite uncertainties about Dodge, who is cryptic with respect to his smuggling methods and his connection to the CIA, McPhee delivers anecdote after anecdote about life—creative or otherwise—under the KGB. With no access to formal art-making materials except for what acrylics and gouaches could be passed along, artists used wallboard and automobile paint. Many destroyed their pieces after showing them to friends, and some works were too large to be removed from their claustrophobic studios. Evgeny Rukhin, a more prominent dissident, locked himself in restrooms in Leningrad and painted tempera on the hand towels for practice; he joked that he’d always have phone service because it was too valuable for the KGB to let his presumably-tapped line go silent. Another painter devised a secret doorbell system to avoid the authorities.

Venture after venture, Dodge risked arrest or suspicion wherever he went—and not just at the hands of the state. The mind-numbing spiderweb of informants included some artists in the underground, as well; it took those who trusted Dodge a miracle to do so. His purchases were as much largesse as they were acts of curation; artists paid rent with his money, and in one instance when he didn’t have cash on hand, he traded jeans and phonograph records for the canvases he wanted. At a time when visiting Americans were snatched as currency for captured Russian spies, Dodge’s forays—which often entailed touristy bus tours, whose agendas he’d skip to scan for acquisitions—were transcontinental gambles. But he made them, one after the other, much like Igor Tiulpanov and the paintings he composed with a one-hair brush.

The narrative carries forward in a unified way until Rukhin’s death, at which point the book frays into multiple hypotheses: accidental fire, KGB arson without the intention of murder, KGB murder by arson, death via injection by the KGB prior to arson. As one artist said of the paranoia: “There is no exaggeration in Orwell.”

A world where criminals, on promises of leniency, are sent by police to harass artists—where art shows are bulldozed, where governments attack artists as morally and sexually deviant, where the only forums where artists can see banned foreign works are in the state publications that decry them—might seem an impossible one. But McPhee’s scrupulous investigation reveals that it has already happened, and is ongoing. The plight of Russian activist group Pussy Riot recently gained international attention, and writers and 10,000 supporters marched in Moscow this spring to protest persecution. The United States itself is no exception—recall the National Portrait Gallery’s censorship of David Wojnarowicz’s 1987 video installation “A Fire in My Belly” after complaints from the Catholic League.

The Ransom of Russian Art is McPhee’s own masterwork of portraiture, one loaded with troves of details and reproductions of dissident pieces. The book makes several things clear: the vulnerability of art, the tenacity of artists, and, as Mayakovsky once said, “the myth of an apolitical art” (which, he concluded, must be “smashed to smithereens”). Above all, it vindicates that mercurial but essential quantity: the charity of strangers. For most of the artists he encountered, Dodge’s self-funded expeditions were their only contact with the fabled West. But he was also on the receiving end of kindness. McPhee honors these artists, and Dodge, by making their efforts public through his journalism. And the man who returned Dodge’s lost address book—the one containing all of his acquaintances in the Soviet Union—wasn’t a KGB agent, after all, but someone with a conscience.

Andrew David King is a new NBCC member who has written poetry, reviews, and essays (some forthcoming) for ZYZZYVA, The Iowa Review, Arroyo Literary Review, Kirkus Reviews, and The Rumpus. He is a staff blogger for The Kenyon Review, and his first chapbook–titled The Forever Thirst–will be published by Finishing Line Press.