Each day leading up to the March 8 announcement of the 2011 NBCC award winners, Critical Mass is highlighting our thirty finalists. In a first, the NBCC is partnering with other websites to promote our finalists as well in the categories of Criticism and Poetry. The fifth and last of our Criticism finalists appears on The Rumpus today; our Poetry finalists are posted now at O, the Oprah Magazine website. In #21 in our series, NBCC board member Gregg Barrios offers an appreciation of criticism finalist Geoff Dyer's “Otherwise Known as the Human Condition: Selected Essays and Reviews 1989-2010” (Graywolf Press), at The Rumpus and below: 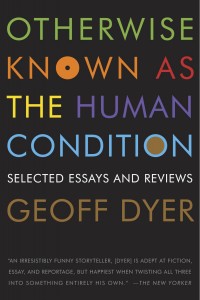 There are writers for whom no forms exist: too clever for novels, too skeptical for poetry, too verbose for the aphorism, all that is left to them is the essay – the least appropriate medium for the foiled. – Don Paterson.

What makes Geoff Dyer a breath of fresh air in the stodgy academic world of “state-of-the-fart theorists” – that has for the most part been the mainstay of literary criticism?

This new sampler of Dyer’s freelance work is full of dry wit and acute observations. But it is the passionate and personal approach to his subjects that make Dyer’s work shine. If you’ve never read Dyer who has been described as “a true original” and “possibly the best living writer in Britain” this is the place to start.

He possesses a distinctive voice that crosses genres, often melding nonfiction with fiction, autobiography with literary criticism and a mash-up of English schoolboy insouciance and new wave romanticism.

This heavyweight collection contains over 50 essays, 400+ pages and over 20 years of his published bits and pieces. And while the selections stand alone, they have been thematically divided into sections – visuals, verbal, musicals, variables and personals.

I however was drawn to the topics that I found intriguing while keeping Dyer’s entreaty in mind. “There's no area of specialized concern or expertise; on the contrary, the pleasure, hopefully, lies in the pick 'n' mix variety, the way one things leads to another (often quite different) thing.”

I read his very short piece on Richard Avedon first, since as a journalist, I had occasion to interview Avedon. And while the essay centers on Avedon’s fashion and portrait photography, Dyer boldly states that the photographer in his last years (at the New Yorker) “seemed to be running on empty.”  Yikes. I bristled in disagreement.

I rarely fill the margins of books with commentary, but soon found myself doing so with Dyer’s collection. And yet other essays made me eager to sample the work of heretofore unknown visual artists, writers, and jazz musicians – in order to come back and discourse with Dyer. This of course is what every critic hopes for. And as a reader, what one hopes to gain from reading criticism.

The “verbal” or literary section offers reviews and evaluation of writers from D.H. Lawrence, Susan Sontag, and Rebecca West to John Cheever.  They aren’t ordinary reviews. Instead, Dyer uses an off-center approach.

In reviewing Cheever’s published Journals, he audaciously declares: “I would go further and suggest that this selection from his journals represents Cheever’s greatest achievement, his principal claim to literary survival.”  He argues his case and ends with a brilliant quote from the Journals.  What Dyer does is whet one’s appetite to reread such works and form one’s own re/evaluation.

In his review of Sontag’s posthumous collection, “At the Same Time,” Dyer posits the question: “To what extent is it possible to be a great prose writer without being a great writer of fiction?”  He quotes from David Rieff’s intro that his mother “valued her work as a fiction writer more than anything else she did.” Dyer then injects, “I remember thinking, when In America won the National Book Award, that the prize was thoroughly deserved – as long as one assumed that it was given for everything except the book in question.”

At this point, the reader is apt to wonder where Dyer is going with this. Is he going to further diss Sontag’s award-winning novels? Or is he going to express his debt to Sontag for sparking his own writing about photography?

Instead Dyer throws a curve. He channels Sontag (himself as herself) as he reflects on his career as a brilliant prose writer and critic while at the same time a not so great fiction writer.

“Critics are always working the room. They way they do so changes over the course of a career. Young critics like to disparage and tear down. Later when they write about the real heavyweights, it is not so much as subjects… as their own ability to go toe-to-toe with greatness that comes under examination. Once this test has been passed, a reversal takes place when an unknown, underrated, or neglected figure is deemed worthy of the attention of a particularly respected critic.”

As a reader what I often found in Sontag’s writing, I also see in Dyer: an intellectual curiosity, the championing of an obscure or neglected artist or work, and in “the way one thing leads to another (often quite different) thing.”

In the book’s Musical section, the essays “Is Jazz Dead?” and “On Cherry Street” are riffs on his 1992 book on jazz, “But Beautiful.” The obverse is also true.

In a meditation on J. M. W. Turner’s painting, “Figures in a Building,” he writes of “the world’s inexhaustible refusal to succumb to the means of representation… and the refusal of certain artworks to be reduced to memory. That makes the [Turner] painting unforgettable.” Dyer then adds that Turner’s work also “suggests another cultural artifact … Andrei Tarkovsky’s The Stalker!” It isn’t surprising that Dyer’s just published book Zona explores The Stalker in an almost scene-by-scene analysis.

The Personal section of Otherwise is ostensibly autobiographical about the writer Geoff Dyer or perhaps his literary persona. In “Of Course,” his first person narrative details the life of a young bloke in Thatcher’s England who meets the woman of his dreams. Dyer relates how they met, how they previously met, and ultimately how they met -which neither remembered until after they were married. It’s quite entertaining and brilliant – the Nietzsche and Eliot quotes aside.

The titular essay that might well be subtitled “In Search of Lost Time” recounts his quest for his own private madeleine – the doughnut. Once he finds the perfect combo of cappuccino and doughnut in New York City, he is hard-pressed to satisfy his addiction. This leads to a tragicomedy that is both laugh-out funny and incredibly sad.

“Otherwise Known as the Human Condition” is a pitch perfect close encounter with Dyer’s critical eye and ideas. (My only quibble: the English edition has more photographs and includes color plates of the works discussed.)

I have only admiration for his moxie. It gave me great pleasure to have Dyer as my own personal docent guide through my now dog-eared copy of this collection.

If essays and reviews are meant to enlighten as much as to reveal the writer’s limits and biases, then Dyer is thankfully guilty of both. He treats readers, as someone recently said, as if our imaginations matter, and with more respect than what often passes for culture and entertainment today.

“A decade from now, by which time I’ll be in my sixties, I hope to have enough new material to bring out a third volume. You see I’ve got tenure on this peculiarly vacant chair – or chairs – rather. It’s a job for life; more accurately, it is a life, and hardly a day goes by without my marveling that it is somehow feasible to lead it.”

Geoff’s Dyer’s work is a necessary addition to all our (reading) lives.