Each day leading up to the March 8 announcement of the 2011 NBCC award winners, Critical Mass is highlighting our thirty finalists. In a first, the NBCC is partnering with other websites to promote our finalists as well in the categories of Criticism and Poetry. Our Criticism finalists will appear on The Rumpus, our Poetry finalists will appear March 7 at O, the Oprah Magazine website. Here is #24 in our series, NBCC board member John Reed on Criticism finalist Jonathan Lethem's “The Ecstasy of Influence,” at The Rumpus. 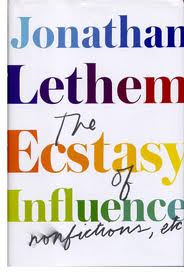 In “The Ecstasy of Influence,” Jonathan Lethem skips through culture—fine arts to music to literature to the personal and collective context of it all.  Lethem carries his enthusiasm with elegant but disobedient prose—plenty of adverbs and metaphors—and the self-awareness of an author who is “firmly in the doubting-nonfiction-is-exactly-possible camp.”  Lethem's authorial consciousness argues that at least a few artists do know what they're doing—that art isn't always smoke, mirrors and magic.  Lethem's collection—criticism, nonfiction and memoir—is an extension of this position, and in itself an exemplification of the role of creativity and creative consumption in our contemporary catastrophe.  Writes Lethem (in his preface):

“A certain political implication comes out of hiding, and it's a political implication very dear to me.  For if we consent that what appears natural in art is actually constructed from a series of hidden postures, decisions, and influences, etc., we make ourselves eligible to weigh the notion that what's taken as natural in our experience of everyday life could actually be a construction as well.”

Lethem stumps for a more inclusive orientation toward literature and the arts (Abundance over Rushmore), and an understanding of writers and artists that accounts for the necessarily collective process of creative expression.  His titular essay, “The Ecstasy of Influence” (originally published in Harper's), which addresses copyright law, neatly refines an appraisal of a cultural reality that is shared—and, in evidence, is seamlessly stitched together from words not Lethem's own.

In all, “The Ecstasy of Influence” draws together eighty essays—variously published—in ten themed chapters: beginnings as a writer; early creative influence; film and comics; fine art; 9/11; music; twentieth century; literature; Brooklyn; creative present.  Throughout, Lethem is driven to champion the underdogs he identifies with—some of them more underdoggish than others—and to find poignant justification for his interests in his own personal experience.  That our interests are absurdly subjective and eclectic is part of Lethem's thesis—he is perfectly content to overstate his position, trusting his readership to presume the artificiality of critical posturing.

Popular culture presents a more packaged arts culture through shrinkage—the shrinkage of the arts communities, the shrinkage of what we call art, the shrinkage of the subjects deemed worthwhile, serious, and relevant.  Lethem is unwilling to concede to such canonical parsimony.  The instinct to recreate and recreate “Rushmore” is “discredited, inane, unwieldy, and obnoxious.”  Nevertheless, the market, and a coupling of arrogance and indolence, perpetuate the whopper. To cede the floor to Lethem:

“Rushmore is a founding-father dream, a religious myth, and worse: It's a lid on not-thinking.  Screw Rushmore.  Dismantle the graven image, Hemingway-Faulkner-Fitzgerald-Steinbeck begat Bellow-Mailer-Updike-Roth who begat the counterculture Rushmore of Heller-Kesey-Pynchon-Vonnegut who begat the shrinking-readership Rushmore of DeLillo-Coover-Barth who begat the humiliating post-stature-edition-and-just-pick-any-four-depending-on-who's-hot of Wallace-Moody-Chabon-Franzen-Eugenidies-Powers-Vollman-or-even-sometimes-Lethem.  (Dismantle it from inside, oh you my brothers!  They only project our features on that stone to mock us for how deficient we appear there!)”