Each day leading up to the March 8 announcement of the 2011 NBCC award winners, Critical Mass highlights one of the thirty finalists. Today, in #22 in our series, NBCC board member Jane Ciabattari considers autobiography finalist Sharifa Rhodes-Pitts' “Harlem Is Nowhere” (Little, Brown). 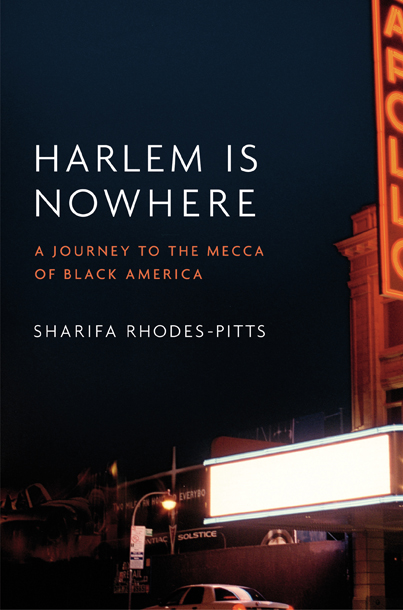 Sharifa Rhodes-Pitts’ first book is a passionate and meditative pilgrimage to her own literary mecca, the capital of black America.

Growing up in Texas, Rhodes-Pitts first read about Zora Neale Hurston and Jean Toomer in Alice Walker’s “In Search of Our Mother’s Gardens.” Off she went to the library, to check out their work. At fourteen, she set out to read through the works of writers from the Harlem Renaissance. At fifteen she wrote of her imagined Harlem in an assignment that called upon her to write a poem in the style of Langton Hughes’ “Theme for English B.” In high school she moved on to Piri Thomas, Claude Brown, and James Baldwin. At Harvard she took a freshman seminar taught of Henry Louis Gates’ “dream team” of black intellectuals–Cornel West, Anthony Appiah, William Julius Wilson, and others. She also studied with Jamaica Kinkaid, Adrienne Kennedy, and filmmaker Isaac Julien.

Her training in African American studies and documentary filmmaking informs this lyrical memoir of the years she spent in Harlem, beginning in 2002. She walks its streets, takes today’s official tour (she is most taken with an 1880s vintage photograph of the block where she lives,133rd Street and Lenox–“Harlem, barely inhabited”) and examines such cultural artifacts as the early 20th-century scrapbooks of Alexander Gumby, James Van Der Zee’s formal Depression-era photographs and funeral portraits, and Raven Chanticleer’s African-American Wax and History Museum.

She picks up the subtle art of neighborliness from those around her. From Ms. Minnie, who lives in her building, she learns how to read the streets: “Sit and watch, stop and stare.” Ms. Minnie, who was raised in South Carolina, mentions that her maiden name was Sojourner. “She looked me squarely in the eye before continuing. That’s not a slave name,” Rhodes-Pitts writes.

As she studies Harlem’s history, riffs on chalk drawings on the sidewalk, encounters  hostile police officers  and New Black Panthers, and goes to block meetings and street protests against gentrification that might displace long-rooted residents, she positions herself as a witness, a listener, a chronicler.

In one glorious chapter, she revisits journeys to Harlem made by fictional characters in novels by writers including Wallace Thurman, Claude McKay, and Nella Larsen (“Homeless Helga Crane sings that Harlem, teeming black Harlem, had welcomed her and lulled her into something that was, she was certain, peace and contentment”). She rereads the Harlem writers who had first lured her—Baldwin, Hurston, Ralph Ellison.

Rhodes-Pitts borrows her title from Ellison’s essay about post World War II Harlem as a metaphoric space in which “the major energy of the imagination goes not into creating works of art, but to overcome the frustration of social discrimination.” The question of where Harlem is headed in this new century hovers over these thoughtful, revelatory essays. “Harlem Is Nowhere” is an intricately detailed, beautifully rendered portrait, and a caution– the place we have treasured can disappear.

Tracy Smith review for The Guardian.

Danielle Evans in the Boston Globe.

NPR “Talk of the Nation” interview.